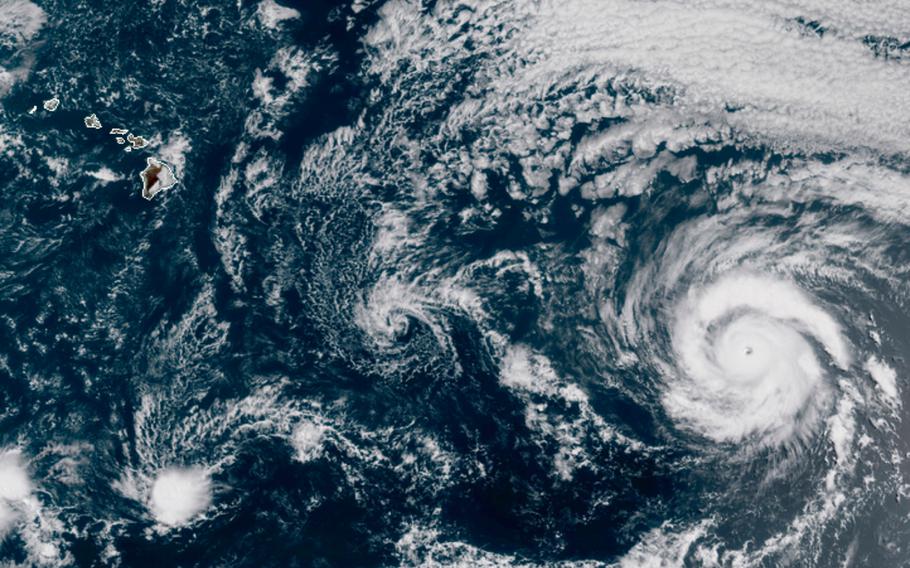 This GOES-17 taken at 3:30 p.m. EDT, Thursday, July 23, 2020, shows Hurricane Douglas, right, churning in the Pacific Ocean heading towards Hawaii, left. The storm is currently a Category 3 hurricane but is expected to weaken before it arrives in the state this weekend. (NOAA)

This GOES-17 taken at 3:30 p.m. EDT, Thursday, July 23, 2020, shows Hurricane Douglas, right, churning in the Pacific Ocean heading towards Hawaii, left. The storm is currently a Category 3 hurricane but is expected to weaken before it arrives in the state this weekend. (NOAA) 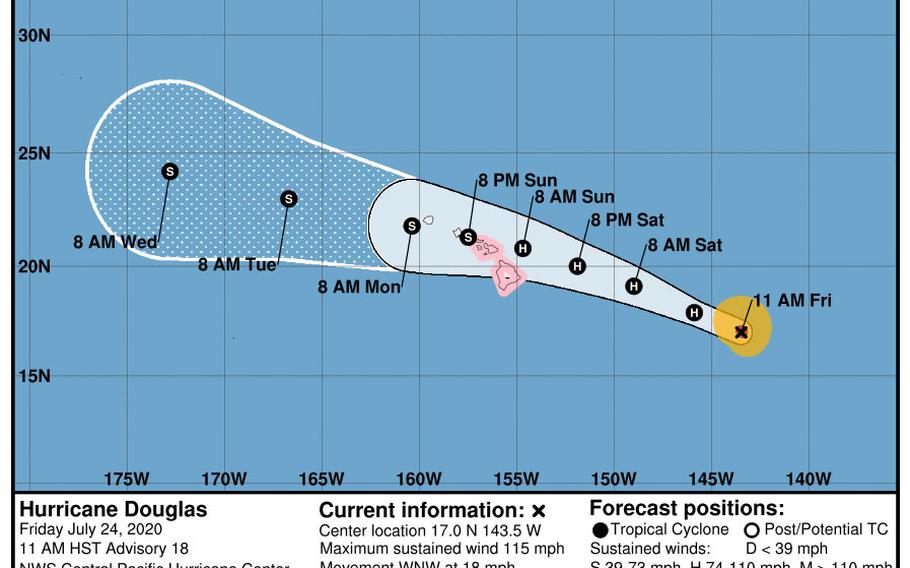 FORT SHAFTER, Hawaii — Military bases on Oahu are preparing for the possible weekend onslaught of Hurricane Douglas, which was a was potent category 3 storm as of Friday.

Douglas, the first hurricane in this year’s storm season, was about 900 miles southeast of the Hawaiian Islands on Friday morning.

The state’s military bases were placed under Tropical Cyclone Condition of Readiness 3 on Friday, indicating that destructive winds are possible within the next 48 hours.

Navy ships were being readied to sortie out of Pearl Harbor beginning Saturday morning to waters outside the storm’s expected path. Meanwhile, the Air Force commenced securing aircraft at Hickam Airfield.

Most of Hawaii’s military installations are on Oahu, including Joint Base Pearl Harbor-Hickam, Schofield Barracks and Marine Corps Base Hawaii. The Navy’s Pacific Missile Range Facility Barking Sands is on the island of Kauai.

The National Hurricane Center has projected the hurricane’s path as possibly moving directly over Hawaii late Saturday through Sunday. The storm, which currently has sustained winds up to 115 mph, is expected to weaken during the next 24 hours but could still wreak serious damage if it does directly hit the state.

“Douglas will continue to quickly approach the main Hawaiian Islands, passing dangerously close to, or over, the islands on Sunday,” the hurricane center said in an advisory posted Friday morning. “Dangerous, life-threatening surf will arrive ahead of the hurricane on Saturday. Heavy rain and increasing winds are possible on the Big Island starting Saturday night, and could quickly spread up the chain Sunday.”

Under both port-condition levels, all pleasure craft are to “seek sheltered waters,” the Coast Guard said in a statement.

All ocean-going commercial ships must make plans to depart unless granted permission by the state to stay.

In advance to both those storms, Navy Region Hawaii ordered ships ported at Joint Base Pearl Harbor-Hickam to sortie to sea well away from their paths. The storms weakened significantly and veered slightly from their projected paths, sparing Hawaii from serious damage.