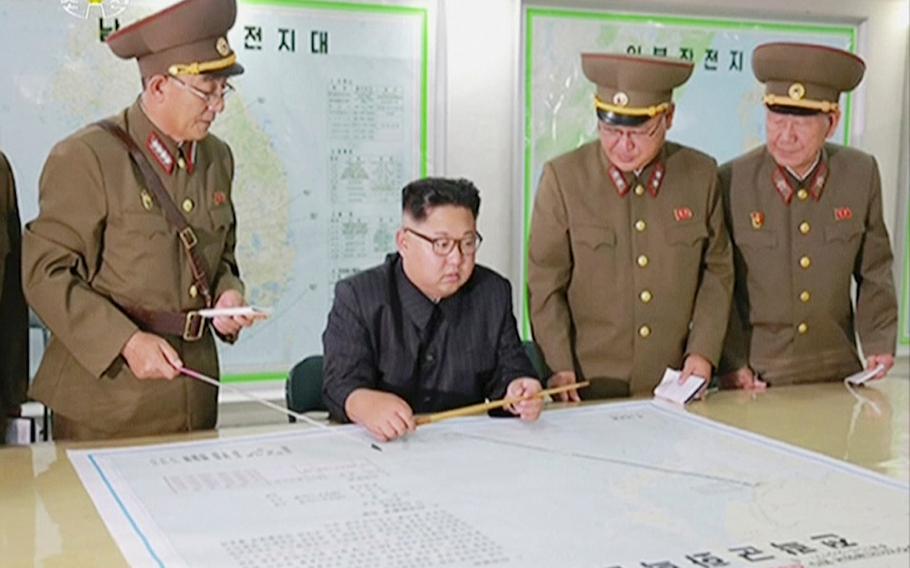 WASHINGTON – As President Donald Trump continues an extended tour of Asia, a bipartisan group of congressional lawmakers, some of whom are veterans, are pushing back against his administration’s rhetoric toward North Korea.

The group of lawmakers said they want Trump to understand that he must go to Congress before a preemptive strike against North Korea.

“Absent of an invasion or imminent threat, that is not (Trump’s) decision to make. That is Congress’ decision to make as to whether we go to war against a foreign power,” Murphy said during a joint news briefing on Capitol Hill. “Hundreds of lives will be at stake. American troops will be put in harm’s way.”

Through proposed legislation and a joint letter signed recently by more than a dozen lawmakers, they are attempting to make their point.

Murphy and Duckworth have joined Sens. Cory Booker, D-N.J., Bernie Sanders, I-Vt., Jeff Merkley, D-Ore., and Elizabeth Warren, D-Mass., in a joint bill that clarifies the president’s war powers when it comes to North Korea. Last week, 16 military veterans serving in Congress, including Duckworth, Lieu and Gallego, signed a letter warning of the dangers of a ground invasion with North Korea.

“The Joint Chiefs of Staff has now confirmed that the only way to destroy North Korea’s nuclear arsenal is through a ground invasion,” the letter read. “That is deeply disturbing and could result in hundreds of thousands, or even millions of deaths in just the first few days of fighting.”

As Trump’s rhetoric against North Korea has grown aggressive in recent months, some congressional members have worried the talk could inadvertently lead the United States into a costly and deadly war.

There is concern, for example, as presidential advisers have made statements suggesting the possession of nuclear intercontinental ballistic missiles is reason enough to start a war with North Korea, Murphy said.

“We want to make sure that people understand what going to war with a country that has nuclear, chemical and biological weapons means,” Lieu said. And “the administration hasn’t done a good job articulating what war looks like.”

A recent report by 38 North, a website of the U.S.-Korea Institute at Johns Hopkins University, suggested the number of lives lost could actually end up in the millions, with millions more injured, Lieu said.

“I have seen a cavalier attitude from this administration about military use,” Gallego said. If “you have any understanding of how war goes, you believe this outcome will be anything but brutal.”

Duckworth said the military has made comments and moves that signal a position inclined towards war. This, as Trump’s rhetoric has fed into the North Korean propaganda machine, she added.

“We are escalating our posture militarily in addition to what the president has said,” Duckworth said. “This administration, they are doing this. The American people don’t even realize this is happening.”

However, during his Asia trip, Trump hasn’t used the same inflammatory comments about going to war with North Korea, the lawmakers said. But that won’t last long, Murphy warned.

“The president’s rhetoric has been uncharacteristically diplomatic. But let’s not kid ourselves. The braggadocious and loose talk is going to come back the minute he is alone in his residence upon his return,” Murphy said. “This is not the pivot everyone has been waiting for. We are very worried what this loose war talk will unintentionally set off.”