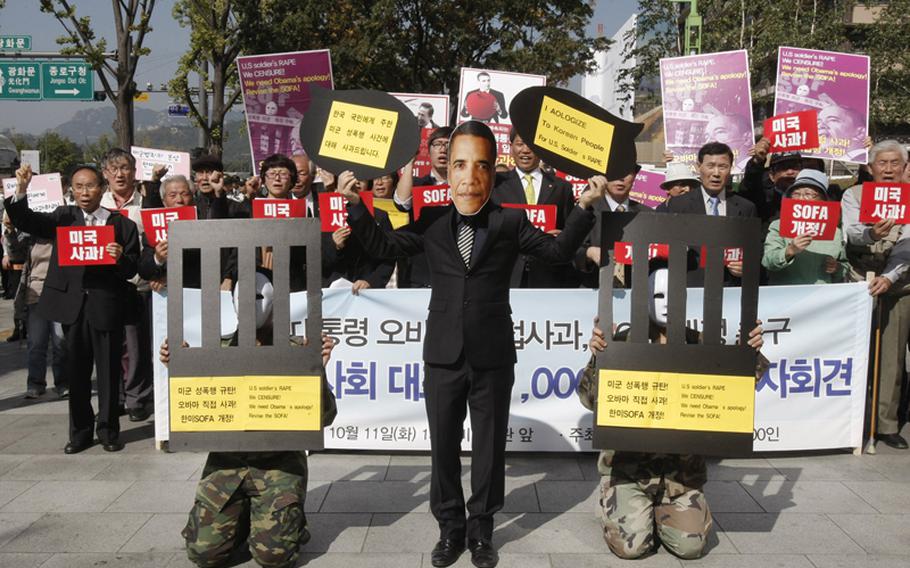 A South Korean protester wearing a mask of U.S. President Barack Obama participates in a march relating to the SOFA between South Korea and the United States. The protest was held near the U.S. Embassy in Seoul on Oct. 11, 2011. The protest was in response to the Sept. 24, 2011, rape of a 17-year-old woman by U.S. Army Pvt. Kevin Flippin. (Ahn Young-joon/AP)

SEOUL &ndash; A South Korea appeals court Thursday rejected a U.S. soldier&rsquo;s plea to reduce his 10-year prison sentence for the brutal rape of a Korean girl, saying he subjected the 17-year-old to &ldquo;unimaginable&rdquo; horror during the attack.

Seoul High Court Judge An Young-jin told Pvt. Kevin Flippin that while the three-judge panel took into consideration the soldier&rsquo;s remorse for what he did, and that this was his first offense in South Korea, the sexual assault was too &ldquo;perverted and sadistic&rdquo; to reduce his prison sentence.

In upholding the sentence, the judges rejected Flippin&rsquo;s argument that his state of intoxication should be considered, as is often the case in South Korean courts.

While they understood the soldier was drunk at the time of the attack, &ldquo;That will not be an excuse for your offense,&rdquo; given that he &ldquo;tortured&rdquo; such a young girl, An said through a translator.

Flippin, 21, who said nothing during Thursday&rsquo;s brief hearing, can appeal his case further, but it was not immediately clear whether he will do so.

At a Seoul High Court hearing earlier this month, he told the appeals panel, &ldquo;I know that I did a very bad thing &hellip; (but) I think 10 years is a little too much.&rdquo;

Flippin was a member of the 2nd Infantry Division&rsquo;s 6th Battalion, 37th Field Artillery Regiment, stationed at Camp Casey in Dongducheon at the time of the Sept. 24, 2011, assault.

During his trial, he admitted repeatedly raping and sodomizing the girl over the course of four hours in a dormitory-style apartment building near the base. He also punched and 0slapped the victim in the face, stole a small amount of money from her wallet, dragged her across the room, threatened her with a knife and pair of scissors, and burned her breast with a lighter, among other things, according to court records and testimony.

In the wake of his arrest, along with a few other high-profile criminal cases involving U.S. soldiers, there were anti-American protests, with protesters and Korean media outlets calling for revisions to the U.S.-South Korea status of forces agreement to allow local authorities greater access to and control over U.S. servicemembers charged with crimes.

In addition, U.S. military and government officials in Korea issued public apologies for the Flippin attack, and U.S. Forces Korea commander Gen. James Thurman reinstituted a curfew for all American servicemembers on the peninsula.

Flippin&rsquo;s sentence was the most severe handed down for a U.S. servicemember in South Korea in nearly 20 years, prompting some to suggest the defendant was unfairly punished because of the attention his case received.

Just 12 days before Flippin was sentenced, the same three-judge panel sentenced a Korean man to 3 1/2 years in prison for the rape of an 18-year-old U.S. soldier based at Camp Casey. In that case, the 25-year-old defendant was found guilty of following the soldier as she left a nightclub on her way to a restroom and raping her in a stairwell.

At the time, Lee Sangyup, a Uijeongbu District Court judge and information officer, said the differences in the two sentences were a reflection of the details of the crimes.

After a hearing last month, a different Seoul High Court panel reduced the Korean defendant&rsquo;s sentence in the nightclub attack to three years, court records show. Among the reasons cited in the judges&rsquo; decision was that the defendant did not have a prior criminal record and he expressed remorse for his crime.

In addition to arguing that his client was drunk at the time of the attack, Flippin&rsquo;s attorney, Noh Sucheol, told the appeals panel earlier this month that the victim had been paid $20,000 in &ldquo;compensation,&rdquo; which is another factor often considered when sentences are handed down in South Korean courts.

A spokesman for the 2nd Infantry Division explained that the U.S. military has reimbursed the victim in the case for $20,000 in medical expenses.