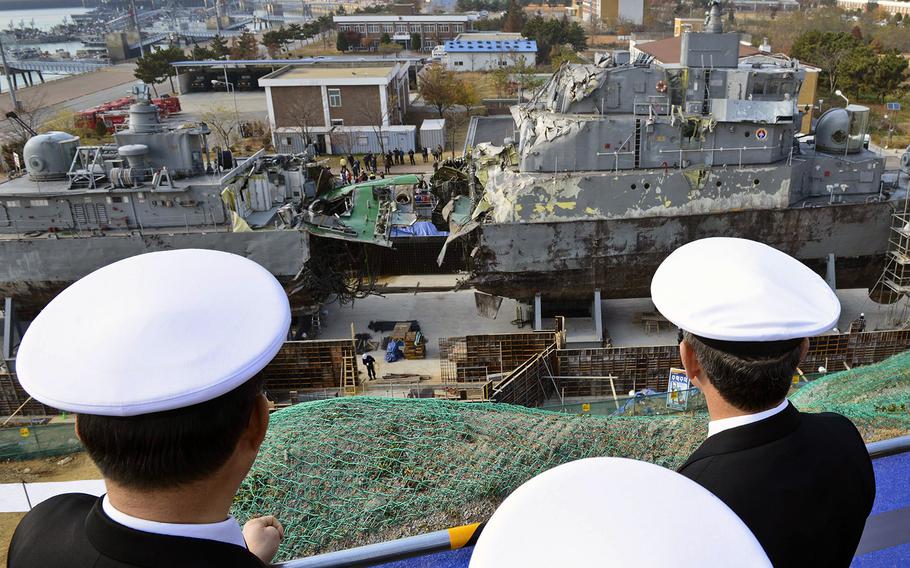 U.S. and South Korean officials look at the remains of the Republic of Korea ship Cheonan while touring a port facility in Pyeongtaek on Nov. 22, 2013. The Pohang-class corvette was sunk by a North Korean torpedo March 26, 2010. (Joshua Bryce Bruns/U.S. Navy)

United Nations sanctions against North Korea are being significantly undermined by lack of reporting on measures taken to implement restrictions, according to a report released Wednesday by the Government Accountability Office.

Since 2006, the U.N. has enacted five Security Council resolutions implementing sanctions on individuals and other business entities who conduct prohibited trade with North Korea. Member states are required to implement U.N. sanctions against North Korea, which include embargoing arms, prohibiting travel and freezing assets.

The U.N. resolutions arose from a spate of hostile acts by North Korea over the past nine years, during which it has conducted missile launches, detonated three nuclear explosive devices, killed 46 crew members of a South Korean ship by torpedo attack and launched numerous cyber attacks, including the hacking of Sony Pictures late last year.

Three of the U.N. Security Council sanction resolutions call upon member states to report on “concrete measures” they’ve taken to effectively implement the provisions of the sanctions, the GAO report said. But more than 80 percent of member nations — 158 of 193 — have not submitted all implementation reports in regard to those resolutions.

Ninety-four nations have not submitted any reports at all, which include countries with major international transit points, such as the United Arab Emirates, or have reportedly been used by North Korea as a foreign intermediary, such as Thailand.

Some member states have submitted reports that lack detail or were late, which impeded the UN’s expert technical panel in analyzing data.

“The panel will not have the information it needs to completely understand North Korea’s evasive techniques if it does not have the full cooperation of member states,” the report said.

Most countries with the largest economies have filed all the reports, such as the U.S., Japan, China, South Korea, United Kingdom and Germany. Many developing countries have not.

There were a variety of reasons for the missing reports, such as weak customs and border control systems and too little money for export regulatory control, the report said.

U.N. investigations have uncovered evidence that North Korea has attempted to evade sanctions by routing financial transactions for forbidden transactions through intermediaries such as China, Malaysia, Singapore and Thailand.

There’s little doubt, however, that the cooperation of member nations is essential in detecting such evasions and making sanctions work.

For example, in July 2013, Panama authorities stopped and boarded the North Korea-flagged ship Chong Chon Gang and discovered what they thought to be arms originating in Cuba. Panama reported the incident to the United Nations, which subsequently sanctioned the shipping company that operated the vessel.

But some member countries don’t apparently fully understand the scope of the U.N. sanctions, the GAO said.

In one case, the U.N. had discovered the government of Uganda had contracted with North Korea to provide police-force training. Ugandan officials subsequently claimed that they had not realized that U.N. sanctions prohibited that kind of activity.