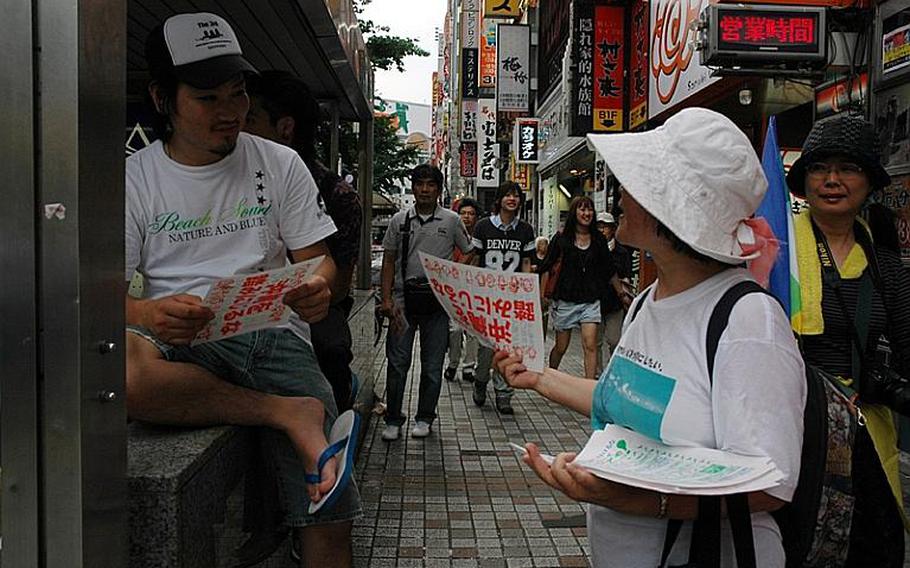 An anti-U.S. military base protester hands out campaign information in Shinjuku Sunday, July 4, 2010, a week before mid-term elections for Japan&#39;s Upper House. The vote will be Naoto Kan?s first litmus test after taking over the helm from Yukio Hatoyama, who resigned in early June after failing to fulfill a promise to renegotiate plans to move Marine Corps Air Station Futenma on Okinawa. (Teri Weaver/Stars and Stripes)

TOKYO &mdash; The controversial relocation of a U.S. Marine Corps air station on Okinawa is not expected to be a major factor in this weekend&rsquo;s elections throughout Japan, government and political experts have said in recent days.

Prime Minister Naoto Kan and his Democratic Party of Japan are expected to hang onto their majority after Sunday&rsquo;s Diet elections. Experts also agree Kan, who took office last month, will survive an internal party vote next month to remain prime minister.

But Sunday&rsquo;s election &mdash; a contest for half of the less powerful Upper House&rsquo;s 242 seats &mdash; will give Japan&rsquo;s voters their first chance to voice dissatisfaction about a government that&rsquo;s less than a year old and already on its second prime minister.

The vote will be Kan&rsquo;s first litmus test after succeeding Yukio Hatoyama, who resigned in early June after failing to fulfill a promise to renegotiate plans to move Marine Corps Air Station Futenma off Okinawa.

Despite Futenma&rsquo;s role in Hatoyama&rsquo;s demise, most who vote Sunday are more concerned with Japan&rsquo;s stagnant economy, its aging population and a proposed doubling of the sales tax from 5 percent to 10 percent.

&ldquo;Japanese people right now are filled with anxiety about how they will be able to support themselves in the future,&rdquo; Yoshito Sengoku, Japan&rsquo;s chief cabinet secretary, said at a Tokyo press conference Wednesday. &ldquo;People feel they are on a precipice, about to fall down the hill they worked so hard to climb.&rdquo;

The DPJ is not expected to win a simple majority of Diet seats on Sunday, meaning Kan will again have to rely on a coalition of smaller parties to maintain power.

Earlier this summer, Kan had expected to win 56 seats. Now, some experts think the DPJ will be lucky to capture 50 of the 121 seats up for grabs, still enough to maintain control but also an indicator that voters are fed up with empty promises about combating unemployment and streamlining government functions.

Looming in the background is Futenma, said Gerald Curtis, a political science professor at Columbia University who spoke in Tokyo earlier this month.

Four years ago, the United States and Japan agreed to move about 8,000 Marines off Okinawa and shift the air station in Futenma to a more rural area along the island&rsquo;s northeast coast. Despite the overall reduction of troops, the relocation of Futenma remains controversial on an island that wants to close bases, not build new ones.

&ldquo;I don&rsquo;t think this issue can be avoided much longer,&rdquo; Curtis said. &ldquo;The Americans have to work with Kan to make this happen.&rdquo;

For now, Kan is distancing his party from the issue. Four Okinawan candidates are running for one open seat out of Okinawa. The DPJ has declined to endorse any of them.

Still, this mid-term election is in some ways the first of its kind in Japan. Until the DPJ&rsquo;s victory last year, the more conservative Liberal Democratic Party held power for nearly 50 years.

&ldquo;It will be very interesting to see,&rdquo; said Michael Auslin, the director of Japan studies for the American Enterprise Institute in Washington. &ldquo;Where do people come down? Are they dissatisfied? We&rsquo;re really not going to know until the voting is over.&rdquo;