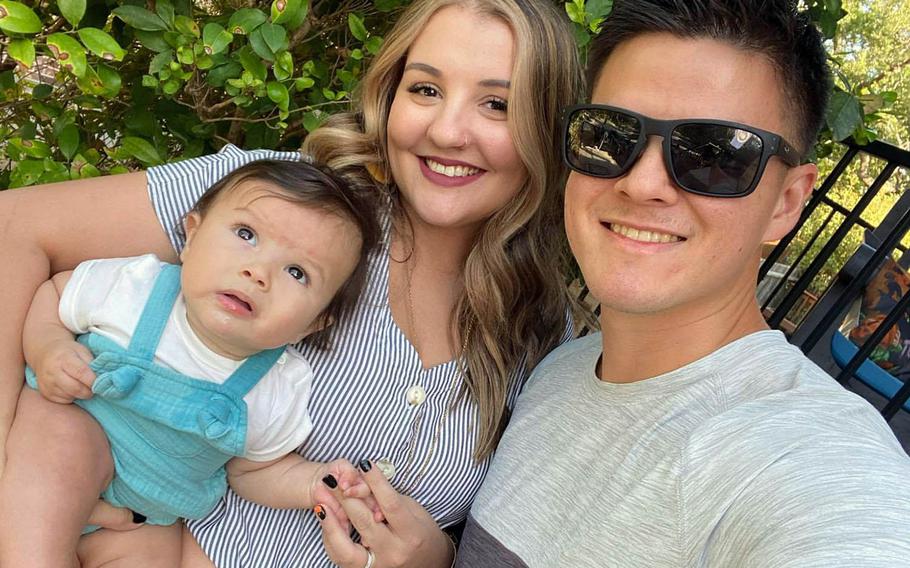 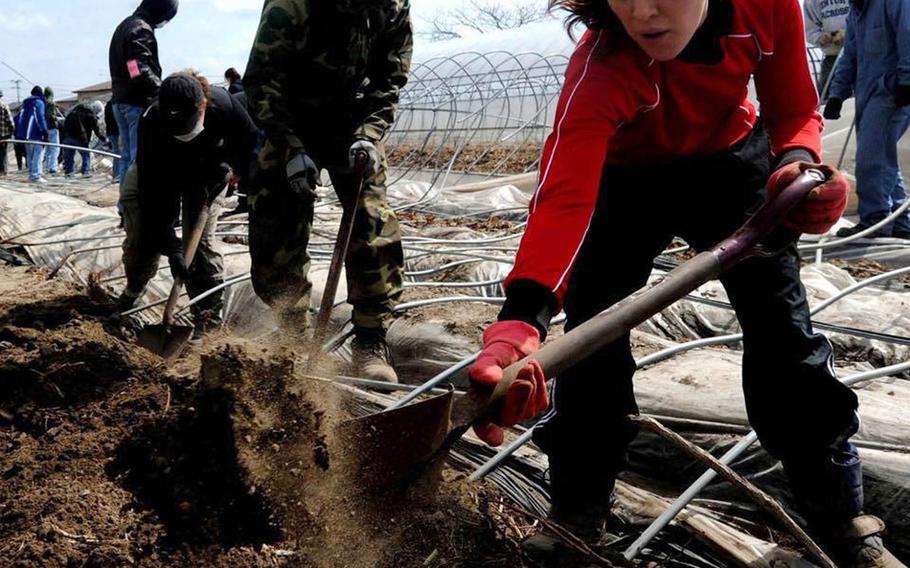 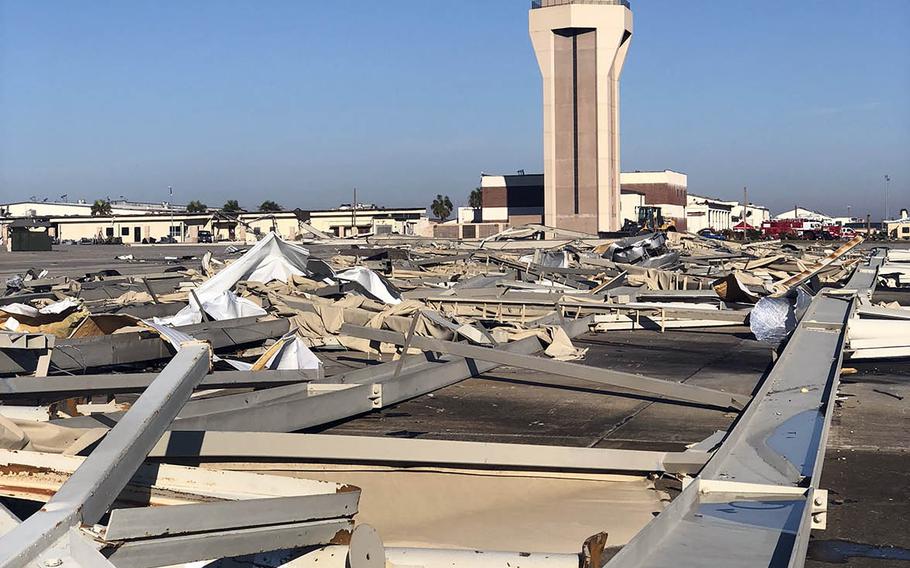 Hangers once used to keep aircraft out of the elements at Tyndall Air Force Base, Fla., lie scattered across the flight line following Hurricane Michael, Oct. 10, 2018. (Alexander Henninger/U.S. Air Force)

Brianne Engle may be one of the few people affiliated with the U.S. military to be front and center for two historic natural disasters in two parts of the world, seven years apart.

Engle — then known by her maiden name, Soeder — and 83 other student-athletes from Robert D. Edgren High School at Misawa Air Base in northeastern Japan were in the Tokyo area for a weekend sports trip when the Great East Japan Earthquake, a 9.0-magnitude temblor, struck at 2:46 p.m. March 11, 2011, about 50 miles east of Sendai. It sparked a tsunami that slammed the shoreline nearly 60 feet high in some areas.

“I definitely didn’t think I would have to go through an evacuation once, much less twice in my lifetime,” she said during a recent online interview from her home at Tinker Air Force Base, Okla.

Engle recounted the challenges that she and her family faced and overcame since March 2011.

The Tohoku quake was the most powerful ever recorded in Japan, and the fourth strongest in the world since 1900. Japan’s national police agency reported in December 2020 that 15,899 people were killed, 6,157 were injured and 2,529 remain missing. The quake, tsunami and resulting aftershocks caused an estimated $34.6 billion in damage.

Michael was the first Category 5 hurricane on record to strike the Florida Panhandle, according to the National Hurricane Center and National Weather Service, and the strongest to affect the contiguous U.S. since Andrew in 1992. It caused at least 74 deaths, 59 in the U.S., and an estimated $25.5 billion in damage, $3 billion alone at Tyndall. Every building on base sustained some damage; water, power and sewerage systems were destroyed.

Brianne, her husband, Air Force Tech. Sgt. Keith Engle, and their four pets evacuated from Tyndall to Birmingham, Ala., then other locations before arriving at Fairchild Air Force Base, Wash.

Through both disasters, Engle said she has learned to stay optimistic.

“Whenever life throws curve balls at you, you just keep pressing on and you’ll come out of it a stronger, more knowledgeable person,” she said.

Tohoku riftsOnce the March 2011 earthquake and dozens of aftershocks hit, any thought of athletics was forgotten.

Engle and her soccer teammates, who traveled from Misawa by train, were already at Yokota Air Base in western Tokyo when the shaking started. Her sister, Bailey, was still en route with the softball team and other student-athletes.

Engle said she felt strong shaking from her room at Yokota, but it wasn’t until her coach told the players to turn on the TV that she realized the enormity of the situation.

“The one thing I can’t shake is that image,” Engle said. “It was a huge, black wave taking out everything in its path. Then, realizing the footage was Sendai, where my sister and her team were last we spoke.”

Eight hours passed before Engle reached her sister by cellphone, and even longer to speak to her mother, Tracy, and sister Faith, 11, at Misawa, she said.

“The feeling that came over me, I don’t even think I could explain it, put my stomach in knots,” Engle said of being separated, incommunicado, from family.

Coaches and students said the biggest challenges were ensuring all the Edgren people got safely to Yokota, which took nine hours, and communicated with families at Misawa to let them know they were OK and then to find a way home.

Roads and rails bridging Tokyo and Misawa were out. In stepped Chief Master Sgt. Ben Caro of the air mobility squadron at Yokota. “We’re trying to do what we can to help these folks,” he said at the time.

Compounding that issue were real-world military concerns: Yokota and its airlift wing were playing a pivotal role in Operation Tomodachi, the military’s major relief effort in northeastern Japan.

It took two days, but all the Edgren people were flown home via military aircraft to Misawa. Piecemeal, it all got done — sometimes flying toward a Misawa airfield darkened by power outages, as track coach Martina Campbell described her flight home.

“Upon our arrival, there were no lights, no power [but] we landed. Safely,” Engle said.

Uprooted againThe unsettling aftershocks continued. Engle said she and her family were given a choice to stay at Misawa until she graduated, or move on to Ramstein Air Base in Germany, where her father, Master Sgt. Brian Soeder, was stationed. They chose the latter and in April, they left Japan.

“I was just ready from the start to move forward and forget about that day,” she said of March 11. “It still weighs so heavily on my heart.”

After arriving at Ramstein, she began taking college courses and worked part-time when she met a young fireman on his first Air Force assignment, Keith Engle.

The two were married in May 2015, did a brief tour together at Scott Air Force Base, Ill., near St. Louis, followed by a transfer to Tyndall in March 2018. Seven months later, Engle was uprooted again.

“So much debris,” Engle said. “My heart hurt so badly.”

The Engles rode out the storm in Birmingham, Ala. Eventually, her husband was called back to help with the relief efforts at Tyndall, working three days on and two days off, and she, the child and pets went to Tampa to stay with his family.

On the way to Tampa, they were able to stop by their home in Lynn Haven, 15 miles north of Tyndall, where Engle said they found "zero damage" to the inside of their home, with none of their belongings lost.

The Air Force passed word to families based at Tyndall that they would be going to new bases. The Engles got Fairchild Air Force Base in Spokane, Wash.

They stayed there two years, then Keith was reassigned to Tinker, their fourth move in six years. They arrived a little over a month before the storm that pretty much shut down Texas two months ago.

This time, Engle said she and her family were well prepared. They never lost water and power and because they had just moved in, and they were well stocked with supplies.

If her experience has taught her anything, Engle said, it’s to look on the bright side.

“I always see every situation as the glass half full,” she said. “I have always been able to see the silver lining in things. I would keep it simple and say, ‘This, too, shall pass,’ because it’s always been what gets me through.”