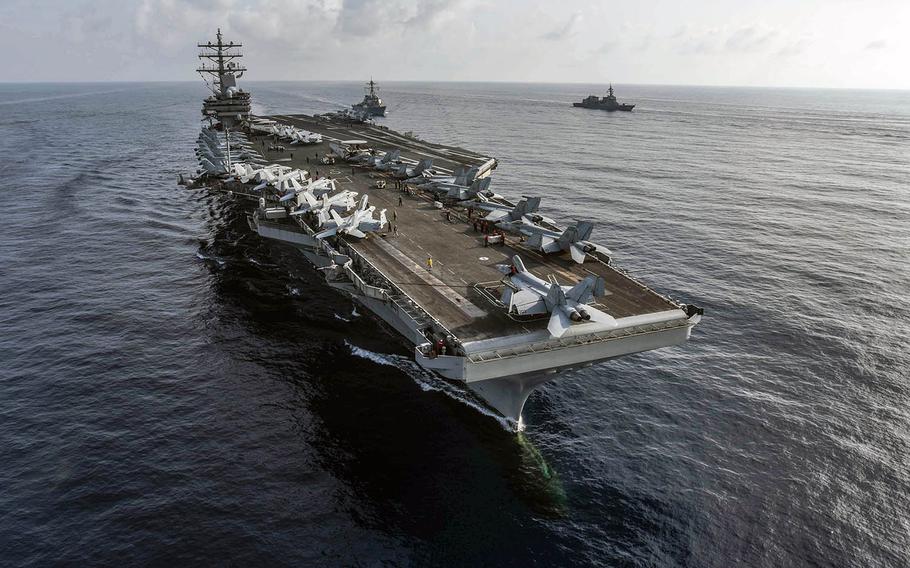 Petty Officer 2nd Class Sean Gevero, a nuclear electrician’s mate, was found guilty of wrongful use or possession of controlled substances after admitting to possessing LSD with intent to distribute in August 2017 and illegally possessing steroids on Feb. 9, 2018, according to a pre-trial agreement.

A military judge sentenced Gevero to 90 days in confinement, followed by a bad conduct discharge, according to Naval Forces Japan spokesman Marshall Smith. His rate was also reduced to E-1.

Gevero’s is the latest in a string of courts-martial related to the case. On Jan. 14, Petty Officer 3rd Class Philip Colegrove, also a nuclear electrician’s mate, was sentenced to 10 months in jail, a bad conduct discharge and reduction in rate to E-1 after pleading guilty to selling drugs from the Ronald Reagan.

Colegrove admitted he sold LSD and methylenedioxymethamphetamine — also known as MDMA or ecstasy — onboard the Ronald Reagan several times from January 2017 to February 2018. He also pleaded guilty to bringing LSD “onto a vessel used by the armed forces” with intent to distribute, according to his pre-trial agreement.

Strandberg admitted to conspiring to distribute MDMA onboard the aircraft carrier between January 2017 and February 2018. Miller admitted to distributing LSD near Yokosuka during the same period.

Strandberg was sentenced to 60 days and Miller received 30 days in confinement.

A fifth, unnamed defendant in the case is awaiting an Article 32 preliminary hearing, Smith said. Article 32 hearings, the military equivalent of a grand jury, are used to determine if there is enough evidence to justify a trial.

As part of their pre-trial agreements, Gevero, Colegrove, Strandberg and Miller agreed to testify against others involved in the case if called upon.