Former WWII POW returns to scene of imprisonment after 70 years 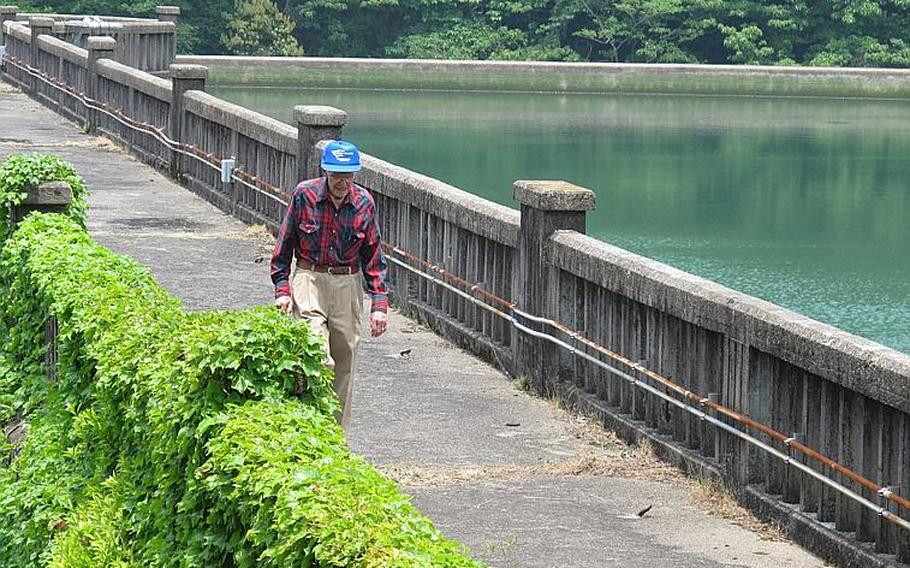 Leroy Myers leaves Sasebo's Soto Dam after the 93-year-old came back to see it one final time May 25, 2013, 72 years after his captivity and forced labor during World War II. (Matthew M. Burke/Stars and Stripes)

SASEBO NAVAL BASE, Japan — The years melted away as Leroy Myers stood at Soto Dam, revisiting the darkest period of his life.

Saturday marked the 93-year-old former military contractor’s return since laboring on the dam in western Japan seven decades ago as an American prisoner of war. He recalled being wracked by starvation and dysentery at 21 as he carried 100-pound bags of cement under the orders of brutal Japanese guards.

Fifty-three American POWs died of starvation, sickness and injuries in the wartime Japanese labor camp at Soto Dam, now part of an idyllic valley outside the city of Sasebo where a monument marks their suffering.

Navy personnel from Sasebo Naval Base and the local Japanese government held a memorial ceremony at the site Sunday. Myers visited a day earlier to see the dam minus the fanfare.

Myers and about two dozen other prisoners at Camp 18 were captured during the siege of Wake Island, a Japanese offensive that coincided with the attack on Pearl Harbor and signaled the start of the U.S. involvement in World War II.

Myers is believed to be only one of two survivors of Camp 18 who are still alive. He was captured with his father, who was also a contractor on Wake Island, and imprisoned in the camp from January 1943 to June 1944. Both were eventually liberated from a prison camp farther north in Fukuoka at the end of the war.

Though slowed by age and diminishing eyesight, Myers walked the entire length of the dam after traveling to Japan for the Memorial Day weekend ceremony with his three children. He paused every few feet as memories flooded back.

There were 20 POW crews under Imperial Japanese Navy guard. Each crew worked for a civilian contractor called a “honcho,” hauling the heavy cement bags up and down the valley for 10-12 hours a day, Myers said. The grueling work required two men to hoist the bags onto a prisoner’s back and mix cement by hand.

Prisoners were often starving and crowded into a bunkhouse when not working, he said.

Myers choked up describing atrocities by guards and the deaths of fellow prisoners.

The POWs endured mass beatings and flea infestations. When a prisoner’s appendix burst, it was cut out on site. Another who pleaded for the Japanese to stop beating him while he worked disappeared after he was hit on the head with a shovel.

One cold winter day, Myers climbed to the top of the dam and considered jumping to his death.

Myers weighed less than 100 pounds when he was finally rescued. His flight home passed low over Nagasaki to survey the devastation from the atomic bomb.

He went on to raise a family and work at food manufacturer Del Monte for 30 years.

The Soto Dam valley is now covered with vegetation, the cement of the dam is aged and covered with vines, and the body of water that Myers helped create is peaceful.

Myer’s daughter, Nancy Booth, looked out over the valley in disbelief, recalling the stories of the wartime despair and suffering that she has heard from her father over the years.

“It’s beautiful,” she said. “It’s hard to imagine it’s what I had heard about.”