Former Army Sgt. William Sanchez of Monterey Park, Calif., was 1 of 7 former prisoners of war who visited Japan on Oct. 16, 2014, by invitation of the Japanese foreign ministry. (James Kimber/Stars and Stripes)

Former Army Sgt. William Sanchez of Monterey Park, Calif., was 1 of 7 former prisoners of war who visited Japan on Oct. 16, 2014, by invitation of the Japanese foreign ministry. (James Kimber/Stars and Stripes) Oral Nichols recalls his time as a prisoner in Japan during World War II in Heiwajima, Japan, on Oct. 16, 2014. Nichols was a civilian responsible for a construction project on Wake Island when he was captured by the Japanese and imprisoned for almost the entire war. (James Kimber/Stars and Stripes) Jack Schwartz listens to the significance of a gift he received from the foreign ministry Oct. 16, 2014, in Heiwajima, Japan. Schwartz was 1 of 7 former prisoners of war invited to visit the Tokyo area by the Japanese government. (James Kimber/Stars and Stripes) 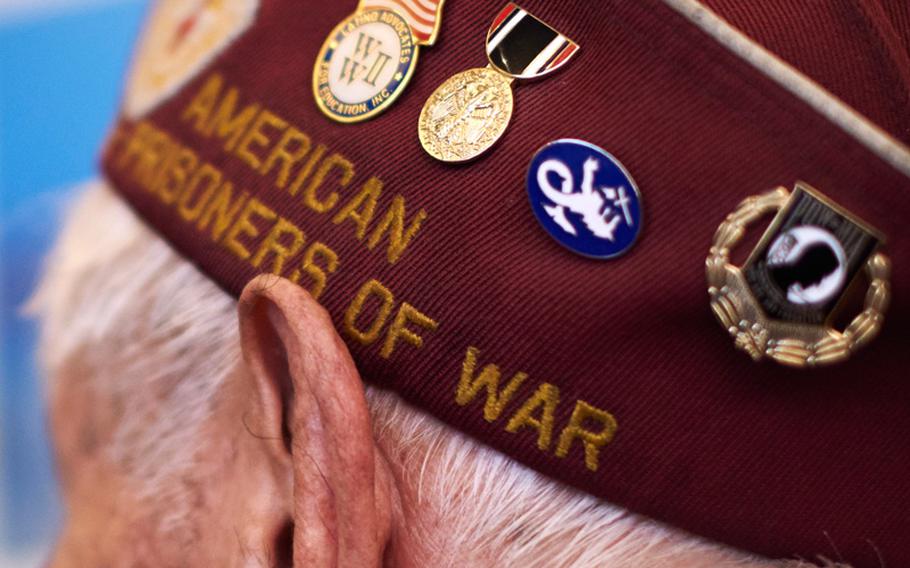 Former Army Sgt. William Sanchez spent several years at a prisoner-of-war camp during World War II after the U.S. surrendered the Philippines to the Japanese. (James Kimber/Stars and Stripes) Jack Schwartz reflects Oct. 16, 2014, on his captivity as a prisoner of war in Japan while looking at a peace statue now standing where a labor camp once existed in Heiwajima, Japan. (James Kimber/Stars and Stripes) Former Army Sgt. William Sanchez, 96, was a prisoner of war at Camp Omori in Japan during World War II after the U.S. surrendered the Philippines to the Japanese. (James Kimber/Stars and Stripes) YOKOTA AIR BASE, Japan — Standing on the waterfront in Tokyo Bay, former Army Sgt. William Sanchez said he can still picture the outlines of Camp Omori, where he was one of 606 allied prisoners of war during World War II.

The 96-year old — one of seven former American POWs in Tokyo this week as guests of the Japanese government — still has strong eyesight and a clear voice as he talks about his days working on the docks here 70 years ago.

“It’s all different, but I can still picture the layout of the camp,” he said during a Thursday afternoon trip to a large shopping mall built on land reclaimed by American, British and Dutch POWs.

“My barracks were over there,” Sanchez said, gesturing through a car park. “The entrance to the camp headquarters was over there,” he added, pointing at a grandstand where spectators can watch speedboats race in a canal.

Sanchez, of Monterey Park, Calif., was captured on Corregidor in the Philippines on May 6, 1942 after a Japanese artillery barrage knocked out his machine gun. He endured a month on a “hell ship” to reach Japan.

The visit was Sanchez’s first trip back since the war.

“It’s amazing what I’m seeing,” he said as he strolled near a leafy neighborhood of gleaming high-rise apartments. A pair of geisha houses near the site of the old POW camp grabbed his attention.

“There used to be 15 of them during the war,” he recalled. “The geishas would come out and wave to us, and we would joke with them, but we never got close.”

Some 27,000 U.S. troops were captured by Japan during the war and suffered in hellacious conditions at the hands of their Japanese captors; torture, starvation, disease, exposure and the continual deaths of their brothers in arms. About 40 percent of the POWs perished — 1,115 of them after being sent to Japan to work as forced laborers at more than 100 camps run by approximately 60 companies.

Japan organized the trip to help the men gain a sense of closure to the horrific ordeal. For a while, they recovered from their injuries and renourished their bodies, many say the pain from their psychological wounds has not dulled with time.

The Omori POWs worked as stevedores — loading and unloading ships on the docks. That’s where Sanchez was on March 9, 1945, when the U.S. launched the most destructive bombing raid in history.

“On the docks, it was every man for himself,” he recalled of the night that U.S. incendiary bombs wiped out much of Tokyo, killing tens of thousands of residents.

Miraculously, the POWs survived, but their guards weren’t so lucky. One lost his mother, wife and two children. New guards had to be brought to the camp to protect the POWs, Sanchez said.

Another former POW in Tokyo this week was Oral Nichols, 93 of Carlsbad, N.M. He was among the first Americans taken prisoner when Wake Island was overrun on Dec. 23, 1941, by a Japanese force that vastly outnumbered the Marine Corps garrison there.

Nichols, one of a large contingent of civilian contractors on the island, was working in a hospital when a Japanese soldier fired a shot into the building, wounding the man next to him. After the surrender, he and other prisoners were paraded in front of a machine gun.

Rather than executing the Americans, the Japanese stripped them naked, tied them up and left them to bake on the flightline for two days before putting them on ships bound for Japan, Nichols recalled.

From there, he was sent to a POW camp in Shanghai, China, where he worked as a clerk, typing prisoners’ records. The interpreter he worked for, named Ishihara, threatened him regularly and was tried for torturing other prisoners after the war.

“He was executed, I think,” Nichols said.

The oldest veteran visiting the waterfront in Tokyo was Jack Schwartz, 99, who was captured on Guam on the third day of the war and reached Japan in January 1942.

Schwartz, then a Navy lieutenant junior grade, was the senior American officer at a POW camp at Kawasaki.

“I had responsibility without authority,” he recalled. “If anything went wrong, it was my fault. I frequently got beaten. Not severely. Just punched around.”

Enlisted POWs at Kawasaki worked for Nippon Steel and at a soy sauce factory and received wages equivalent to two cents a day. Schwartz and an interpreter were allowed to shop at local markets for fruit and spices that the men could then purchase at a small canteen, he said.

He was sent to a mountain camp — Rokuroshi — shortly before the war ended. Nichols, who was sent to Japan, via Korea, as America and its allies drove back the Imperial Army, also ended up in the mountains, working in an iron mine, in the waning days of the war.

Then came the atomic bombings of Hiroshima and Nagasaki and the Japanese surrender on Sept. 2, 1945.

When they got word, prisoners at Rokuroshi painted a POW sign on the roof and waited until supplies were dropped by parachute. Army nurses reached the camp soon after, and their first act was dousing the flea-infested prisoners with DDT, Schwartz said.

After the war, Schwartz spent 22 years in the Navy and 18 as a city engineer in California but swore he’d never return to Japan. He had second thoughts when he was offered the chance this year.

“If the [Japanese] are trying to be nice after awhile, let them be nice,” he said.

At Omori, after the surrender, the POWs were told to form up and march to Yokohama Station to be turned over to the U.S. 1st Cavalry Division.

“When they played the national anthem and raised Old Glory, I finally felt free for the first time,” Sanchez said. “No more beatings… that was the end of that.”

These days, he doesn’t harbor grudges and supports Japan’s efforts to have its military play more active role in world affairs.

“Japan is our biggest ally in the Far East,” he said as he prepared to continue his tour of the Japanese capital. “We need Japan to be on our side. That is the biggest military advantage we can get.”