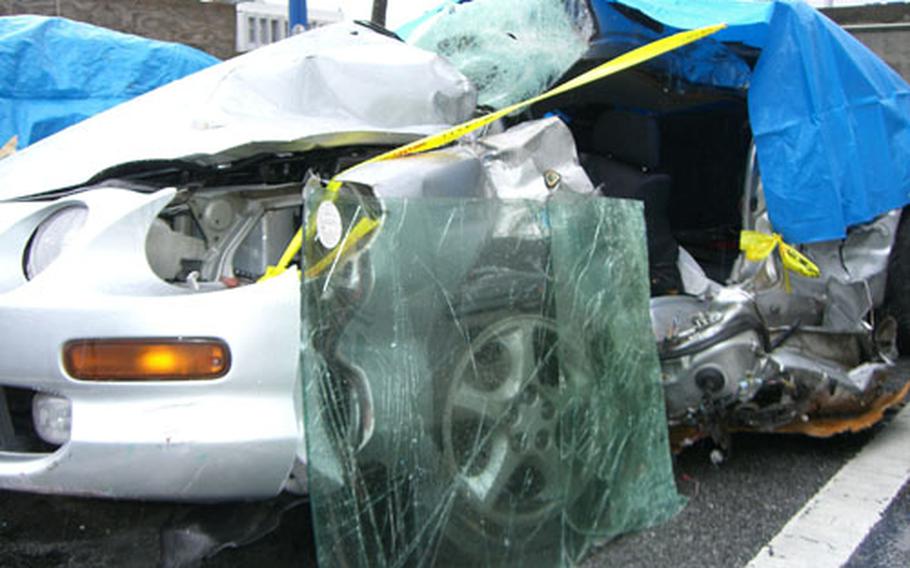 The car driven by James Yeakey is seen here after the head-on collision on Highway 330 in Kitanakagususku, Okinawa. (Chiyomi Sumida / S&S)

CAMP FOSTER, Okinawa &mdash; A former Navy dependent has pleaded guilty in Texas for a drunk-driving crash on Okinawa that killed a Kubasaki High School student and severely injured another four years ago, according to a U.S. Department of Justice statement.

James L. Yeakey, 24, pleaded guilty Thursday to involuntary manslaughter for speeding while intoxicated and causing the head-on collision that killed his passenger, 17-year-old John Benjamin Hall, near the Camp Foster exchange gate in 2008, the U.S. attorney&rsquo;s office for the southern district of Texas said.

Yeakey, who was 20 at the time, was a former base employee and living on Okinawa in 2008 as the dependent of an active-duty sailor. He now lives in Spring, Texas, where he was charged by federal prosecutors in July after an investigation by Japanese police and the Naval Criminal Investigative Service.

The night of the crash, Yeakey, Hall and another teen drank several bottles of alcohol and took cough medicine with others in a Ginowan hotel, according to the district attorney&rsquo;s office.

After the group began discussing a car trip, two men in the hotel room &ldquo;warned Yeakey and the others against driving under the influence and attempted to hide the keys to the cars,&rdquo; the statement said. &ldquo;After the two who hid the keys fell asleep, Yeakey and the other two searched for and subsequently found keys to the car of one of the sleeping men.&rdquo;

Yeakey and the two Kubasaki students left the hotel in the Toyota Celica. About an hour later, Yeakey was driving south on Highway 330 at about 100 kilometers per hour (about 62 mph) &mdash; double the speed limit &mdash; early on the morning of March 23 when he struck another vehicle and veered over the median into oncoming traffic, according to police.

The collision instantly killed Hall and severely injured the 18-year-old riding in the backseat, prosecutors said.