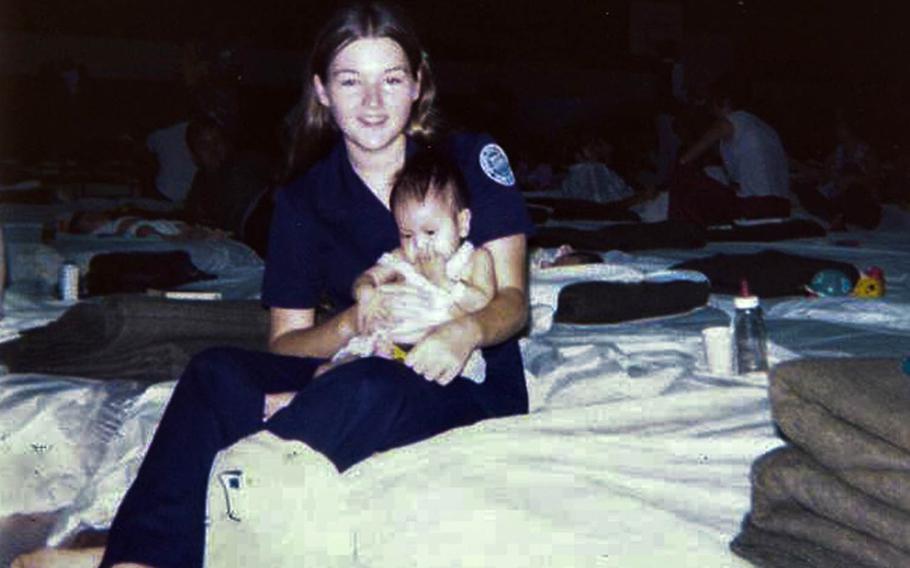 Shirley Mizell, then a junior at Wagner High School on Clark Air Base, Philippines, helped care for Vietnamese orphans evacuated ahead of the fall of Saigon in April 1975. (Courtesy of Shirley Mizell)

Jumbo jets full of Vietnamese orphans were welcomed warmly by local military kids when they landed at Clark Air Base, the Philippines, in April 1975.

Forty-four years later, Shirley Mizell, then a junior at Wagner High School at Clark, has fond memories of helping care for the youngsters, an experience that helped prepare her for a career as a nurse.

“Allied ‘Babylift’ in Full Swing” was the Stars and Stripes front page headline on Monday, April 7, 1975, reporting on an effort that saw 3,300 infants and small children flown to new homes in America and other western nations as communist forces closed in on the South Vietnamese capital.

Tragedy had marred the start of the operation with the April 4, 1975, crash of an Air Force C-5A Galaxy transport at Tan Son Nhut Air Base, Vietnam, that killed 138.

News of the accident quickly reached the kids at Clark, recalled Mizell, 61, of Cottondale, Ala. Her father, Air Force Master Sgt. Joseph “Sim” Simeon Deason, who died in 2007, was an air traffic controller at the Philippine base from 1972 to 1975.

“One of the servicemen killed in the crash was the father of a student,” she recalled.

Wagner students, including Mizell, had waved in freed American prisoners of war when they landed at Clark two years earlier. Many volunteered to help the orphans, she said. Old photographs show some of her classmates carrying children off a plane.

Mizell has hazy memories of the arrival but recalls taking the kids to a gymnasium full of cots and caring for them with her classmates in shifts.

“The kids were scared, and they didn’t have anybody with them,” she said.

Experience babysitting and volunteering at the base hospital came in handy, she said.

“We couldn’t get jobs because all the jobs (at Clark) were done by Filipinos, but we could volunteer. I was a ‘candy striper’ — a young girl who wanted to learn about work in hospitals. We would go in and make beds and wait on patients like a nursing assistant,” she said.

After graduating high school Mizell worked as a nurse, including five years working with sick children. The mother of two and grandmother of five said she was proud of helping the Vietnamese orphans.

“It was good to help and be part of history,” she said.