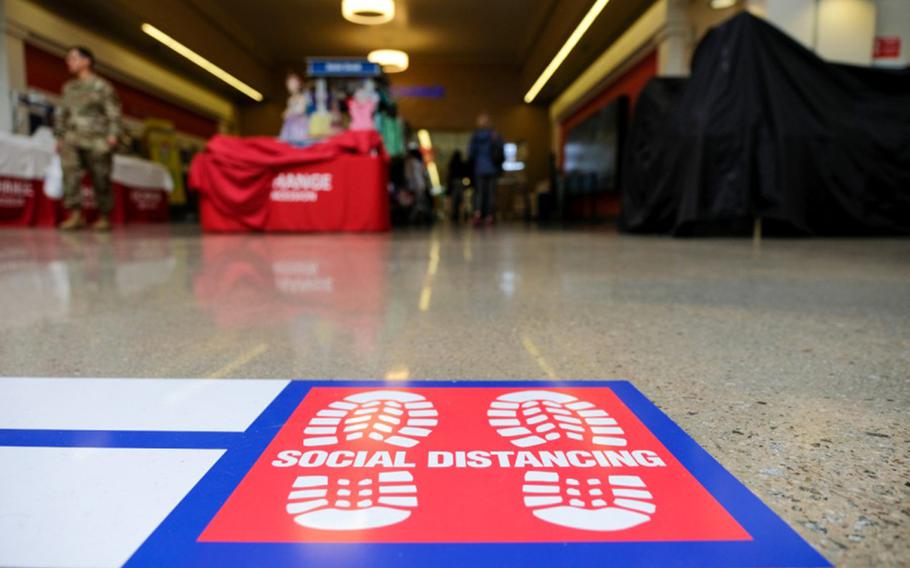 A social distancing decal is posted outside the exchange at Camp Humphreys, South Korea, March 27, 2020. (Matthew Keeler/Stars and Stripes)

The latest cases, which came from Europe, Japan and the United States, raised to 47 the number of USFK troops, family members and civilian employees who have contracted the respiratory virus known as COVID-19.

All travelers arriving in South Korea must undergo a testing and two-week quarantine program aimed at slowing the spread of the virus.

The five cases reported Saturday have been placed in isolation units in a specially outfitted barracks on Camp Humphreys, USFK said in a press release. It provided the following details:

• Two service member dependents initially received negative results after arriving at Incheon International Airport from Europe on June 21. They were taken to Camp Humphreys for quarantine and tested positive on the second test required to leave.

• A service member arrived at Osan Air Base from Japan on a government-chartered flight on Wednesday and was taken to Camp Humphreys, where he tested positive in the initial test.

• A USFK contractor was taken to Camp Humphreys after arriving at Incheon International Airport on Thursday. He also tested positive in his first mandatory test.

• A USFK service member who traveled back to the peninsula from the United States tested positive after arriving at Incheon and displaying symptoms of the disease caused by the virus.

All infections since May 8 have been in people arriving from other countries. Most have recovered.

“Despite the confirmed cases, USFK remains at a high level of readiness with only nine active duty service members who are currently confirmed positive for COVID-19,” the command said.