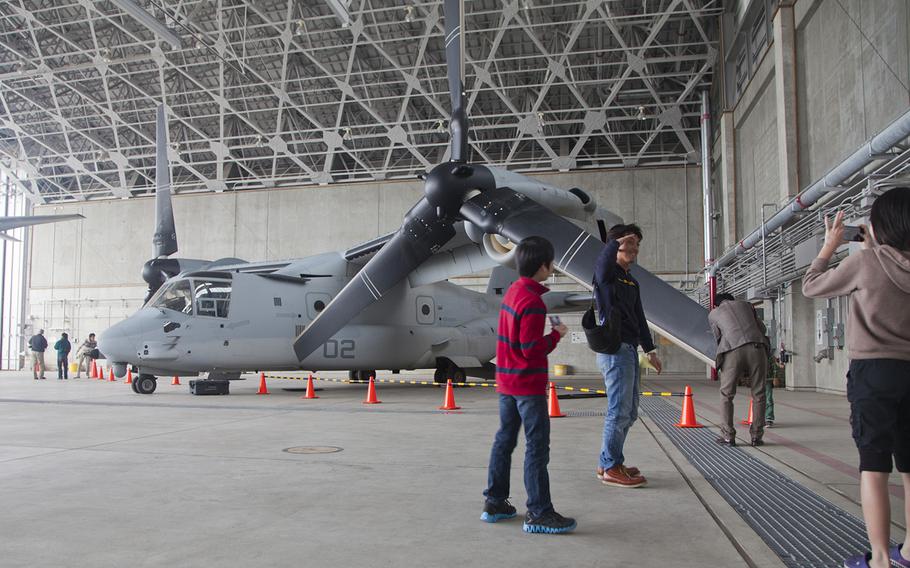 Details were not readily available Monday, but the foam, which contains chemicals banned in Japan, was released at approximately 4:45 p.m. inside an aircraft hangar, a Marine Corps statement said Friday night.

The foam reportedly leaked off base and was seen on local television broadcasts floating through the air near residents’ homes and pouring into flowing channels of water.

“Some [foam] has been contained, and an assessment is being conducted to determine how much went off of the installation,” the Marine statement said.

Marine Corps Installations Pacific “is fully engaged in cleanup of the [foam] at MCAS Futenma and to minimize off-base impacts,” a Marine statement Saturday morning said. “We are investigating the details of the incident and the discharge was not caused by an aircraft-related mishap.”

A similar incident occurred in December when an auxiliary power unit in a Futenma hangar was inadvertently switched on, activating a fire suppression system that discharged the fire suppressing foam. A Marine spokesman said 99% of the material was contained and cleaned up.

The Marine statement Saturday expressed regret for the latest incident.

“We deeply regret that this happened and will continue to work with local authorities to ensure impacts to the environment and community are reduced as much as possible,” the Saturday statement said.

Base officials contacted Japanese government and local officials and are coordinating an off-base response with Ginowan city, according to Marine statements.

Marine officials did not immediately respond to requests for further information Monday. Okinawa Gov. Denny Tamaki plans to demand access to the base through the Okinawa Defense Bureau, which represents Japan’s Defense Ministry on the island, to find the cause of the spill, Okinawa Times newspaper reported Sunday. Similar demands have gone unheeded in the past.

“This shouldn’t have happened and is very upsetting,” Tamaki was quoted as saying by the Times.

Defense bureau officials asked the Marines to find out what caused the spill and prevent future occurrences. The defense bureau was on-site as soon as the spill was reported, collecting information.

Ginowan Mayor Masanori Matsukawa was scheduled to meet with officials from the defense bureau and Ministry of Foreign Affairs’ Okinawa branch Monday afternoon to discuss the spill.

Matsukawa “will demand the cause of the spill and discuss the environmental impact,” a spokeswoman for the mayor said Monday.

PFOS and PFOA are synthetic, fully fluorinated organic acids, which are virtually the same, though their concentrations differ depending on the product, Okinawan officials previously told Stars and Stripes. They are found in firefighting foam, aircraft grease, water-repellant materials and fluorine chemicals.

They have been known to cause tumors, increases in body and organ weight and death in animals. Their manufacture and importation have been prohibited in Japan since 2010.

High concentrations of the substances have been found in water tests around Futenma and Kadena Air Base on Okinawa, as well as Yokota Air Base in western Tokyo. U.S. military officials in Japan have said the source of the PFOS and PFOA pollution is not necessarily U.S. military facilities.

The U.S. military has vowed to replace the foam at Futenma in the next several years.