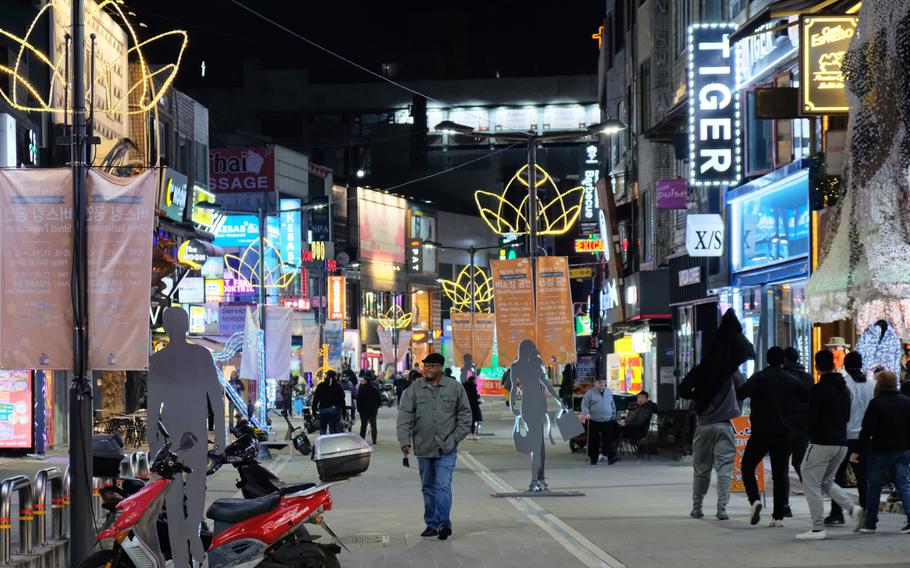 Service members and locals walk through an entertainment district just outside Osan Air Base, South Korea, on Saturday, Dec. 14, 2019. (Matthew Keeler/Stars and Stripes)

Service members and locals walk through an entertainment district just outside Osan Air Base, South Korea, on Saturday, Dec. 14, 2019. (Matthew Keeler/Stars and Stripes) 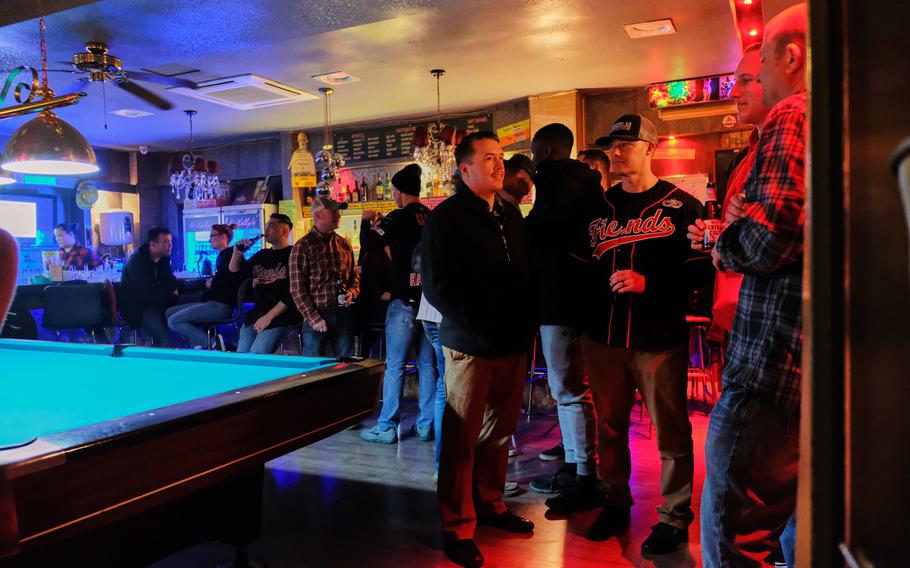 Airmen from the 51st Fighter Wing relax at a bar just outside Osan Air Base, South Korea, on Saturday, Dec. 14, 2019. (Matthew Keeler/Stars and Stripes)

The commander of U.S. Forces Korea made the decision after assessing the number and types of incidents involving troops since the curfew was lifted temporarily on June 17, according to a news release.

Abrams also consulted with other military leaders and unit commanders, who were asked to recommend whether to reimpose the curfew, to continue the suspension or to end it.

“All recommended its termination,” he said in the statement released Tuesday, stressing the need to maintain order and discipline in line with USFK regulations.

“Leaders are responsible for our servicemembers’ on-and-off-post conduct; we are ambassadors of USFK, the United States and the U.S.-[South Korea] alliance to the Korean people,” he added. “We have a solemn responsibility to keep readiness at its highest levels with a ‘fight tonight’ posture, approach and mentality.”

Abrams first announced a three-month curfew suspension on June 17 as a test for some 28,500 American troops stationed on the divided peninsula. He extended the suspension for three more months on Sept. 17, saying he need more time before making it permanent.

Initially imposed after the 9/11 attacks, the curfew, which requires that troops be on base, in their residences or in hotel rooms during the specified hours, has long been an unpopular feature of military life for all branches in South Korea.

Troops said it was a morale killer.

Pvt. Lydia Wombacher, 19, of Warrenton, Mo., said she doesn’t think that all soldiers should suffer because of the actions of a few bad apples.

“There have been some problems, but it’s a very small minority of people,” she said Monday at Camp Humphreys. “I don’t think it’s fair that those people who do what they’re supposed to should be affected by people that don’t.

“I feel like nothing good happens after 1 a.m. anyway,” she said. “But we’re adults. We signed up (for the Army), and I feel like we should be able to make those decisions.”

Officials said reported problems during the curfew suspension period mainly involved fistfights between soldiers and some issues with taxis.

“We continue to be disappointed with the actions of a few individuals, mainly soldiers going out and getting into fights at night,” provost marshal Col. John Fivian told Stars and Stripes on Monday at USFK headquarters on Camp Humphreys.

He said problems were more noticeable in South Korea because troops who get into trouble are usually turned over to their commands; in the U.S., they would be dealt with by local authorities.

Former USFK commander Gen. Walter Sharp briefly rescinded the curfew in July 2010, saying, “I believe that we can trust our service members to do the right thing.”

It was reinstated after several months amid outrage over two high-profile rape cases involving American soldiers. The curfew was extended indefinitely in its recent form in January 2012.

It applied to all service members in South Korea except for those attached to the U.S. Embassy or the Joint U.S. Military Affairs Group-Korea.

Many soldiers said the lifting of the curfew would allow more freedom to do activities such as shopping at night markets in Seoul and traveling.

“I think soldiers should have more time to explore Korea at nighttime,” said Pvt. Tayde Creeks, 19, of Dallas, who joined the Army in January and arrived in South Korea in June for her assignment with the 602nd Aviation Support Battalion.

Pfc. Elliot Vizcarrondo, 29, a 2nd Infantry Division soldier from the Dominican Republic, said the curfew sometimes caused problems because people felt a need to drink a lot in a short amount of time.

“It’s having the freedom to be able to make the decisions that we want,” he said Saturday. “Either here, or in the states, a bad decision is a bad decision, regardless of how late you are out.”