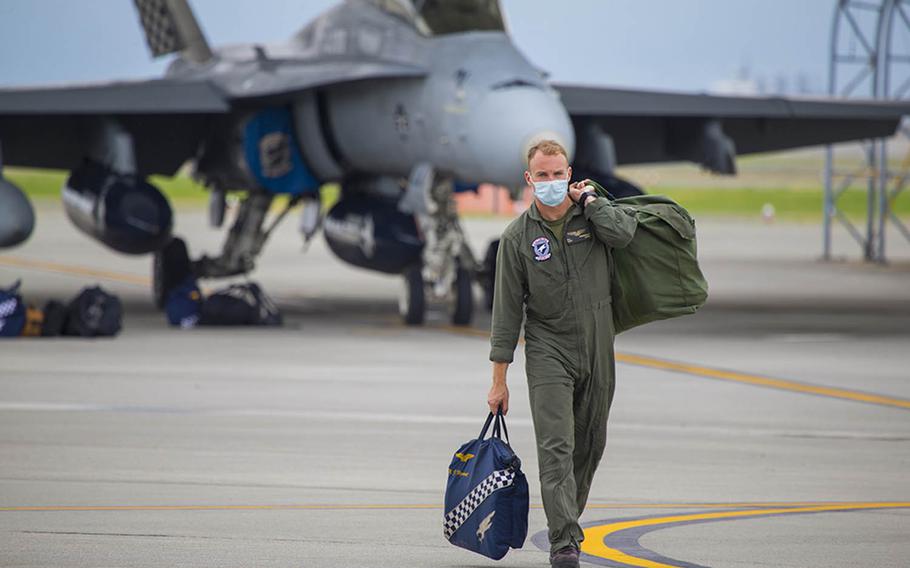 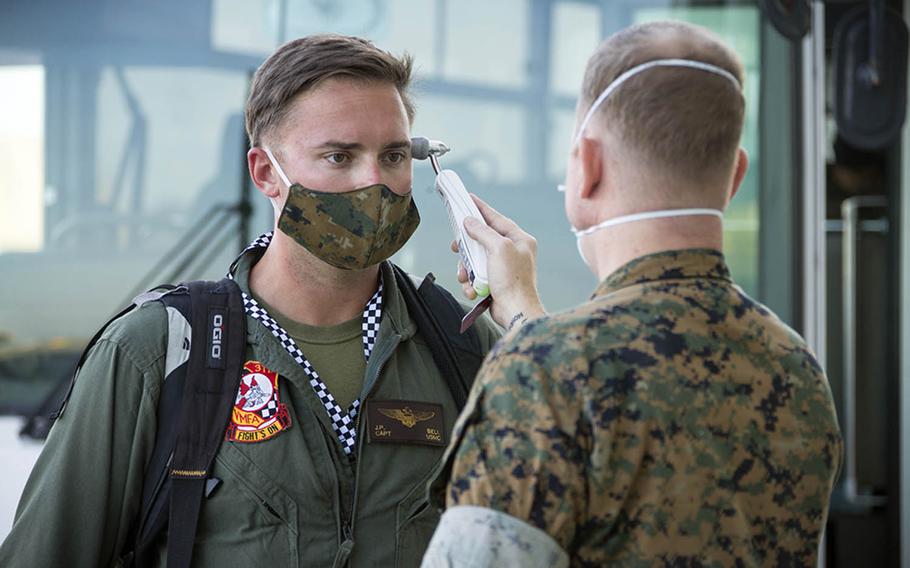 MARINE CORPS AIR STATION IWAKUNI, Japan — Two Marine fighter squadrons recently arrived at this air station for six months of duty in Japan, testing the ability of MCAS Iwakuni to keep the coronavirus at bay as new personnel streamed in.

The squadrons moved from South Carolina to Japan a month apart to reduce the risk of transmitting the coronavirus. Most new infections within the U.S. military in Japan and South Korea are arriving with incoming troops, civilian employees or family members.

Receiving two squadrons tested the air station’s capacity to provide quarantine areas for a large number of inbound personnel and reduce the risk of bringing coronavirus to the installation, said Capt. Marco Valenzuela, a spokesman for Marine Air Group 12, in an email Tuesday. He said Marines at Iwakuni took additional precautions to ensure the Marines from South Carolina arrived safely.

“We worked through logistical challenges to make sure that movement of personnel and their gear was pre-planned, deliberate and effective at preventing the spread of COVID-19,” Valenzuela said, referring to the respiratory disease caused by the coronavirus. “All personnel were screened upon arrival and placed in a restriction of movement status similar to the quarantine measures put in place by the Government of Japan.”

MCAS Iwakuni last reported new coronavirus patients, two new arrivals, on Sept. 27. They tested positive near the end of a 14-day quarantine period, according to a Facebook post by the base. Both patients arrived via “military-coordinated flights.”

New arrivals and returning travelers must quarantine for two weeks at minimum and test free of the virus before exiting isolation, according to U.S. Forces Japan.

The air station, like other U.S. commands in Japan, does not officially specify its coronavirus patients as service members, civilian employees or family members.

The base usually hosts one deployed flying squadron at a time. However, because one MCAS Iwakuni-based squadron, All Weather Fighter Attack Squadron 242, is trading its Hornets for the F-35B Lightning II stealth fighter, the base took on the extra deployed squadron, Valenzuela said.

“Having two UDP squadrons here in Iwakuni allows Marine Aircraft Group 12 to maintain its obligation to the Treaty of Mutual Cooperation and Security between Japan and the U.S.,” he said.

Both deployed squadrons will train across the Indo-Pacific region and undertake missions as required by the 1st Marine Aircraft Wing, Valenzuela added.

The Marine Corps’ Unit Deployment Program began in October 1977 and provides a rotating force of infantry battalions and aircraft squadrons to the Indo-Pacific, Valenzuela said. The program also reduces the number of Marines on unaccompanied tours and improves continuity between rotating units.

A Marine on an unaccompanied tour is stationed overseas apart from his or her family for up to three years.

In addition to the three flying and two support squadrons of Marine Aircraft Group 12, MCAS Iwakuni is home to the Navy’s Combat Air Wing 5, the air component aboard the USS Ronald Reagan, and Fleet Wing 31 of the Japan Maritime Self-Defense.