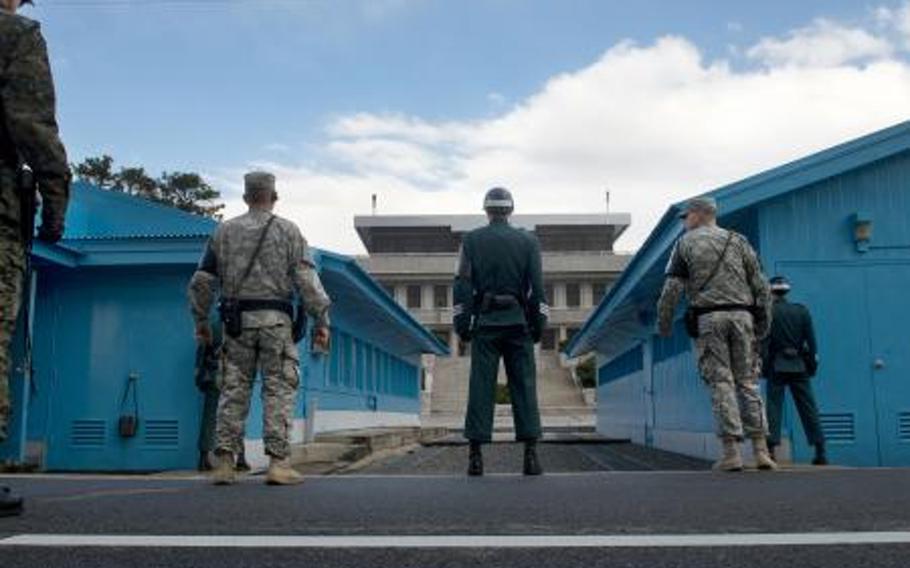 Republic of Korea and U.S. soldiers at the demilitarized zone in South Korea face North Korea, Nov. 11, 2012. An analyst on Korean issues, says strengthening economic ties with China could be Seoul’s best tactic for changing the nature of Beijing’s alliance with North Korea. (D. Myles Cullen/DVIDS)

SEOUL — Strengthening economic ties with China could be Seoul’s best tactic for changing the nature of Beijing’s alliance with North Korea, according to an analyst on Korean issues.

“An FTA (Free Trade Agreement) with China would be a very good long-term strategy to try to shift the way China thinks about North and South Korea,” said Victor Cha of the Center for Strategic and International Studies. “An FTA with South Korea would help to cause a re-evaluation of the equities that China holds on the Korean peninsula.”

Cha and David Kang, director of the University of Southern California’s Korean Studies Institute, spoke this week at an Asan Institute for Policy Studies conference on the possible reunification of the two Koreas. Both are principal investigators for “The Korea Project: Planning for the Long Term,” a three-year study examining the problems that could accompany reunification, and have briefed senior policymakers in the U.S., South Korea and Japan on their initial findings.

Questions persist on how long North Korea’s government can survive. The potential collapse of Kim Jong Un’s regime carries possible nightmare scenarios that could develop quickly — from warring factions fighting for weapons of mass destruction to floods of impoverished refugees trying to flee to neighboring China or South Korea — along with the longer-term challenge of how to unite the two Koreas after decades of ideological and economic separation.

“This isn’t going to be like Germany, where everybody will simply agree and watch one absorb the other,” Cha said.

Eventual reunification is a given for many South Koreans and their government, which has floated ideas of taxation to support unification and last year launched a “unification jar” campaign to collect donations that would be used to defray the costs.

Korea Project’s December 2011 interim report noted there has been little planning for the “inevitable tasks of knitting the two nations together.”

It said, “governments are constrained because of the sensitivity and likely political fallout if such planning were to be leaked to the public.” Changes in government leadership also complicate long-term planning, Kang said Tuesday.

“Governments have at best a five-year time horizon” so it is unlikely they will invest time “talking about something that may happen 20 years from now,” he said.

He said it may be difficult for governments to agree on exactly when North Korea’s government has collapsed, opening the door for outside intervention.

“South Korean leadership will probably be under tremendous pressure to move quickly,” he said. “China and Russia may be saying, ‘It (the North Korean regime) is still working.’”

Those comments follow the release of a U.S. congressional report last month that called China a “wild card” on reunification. The report said Beijing, which views the North as a buffer with the capitalist South, could try to manage or block reunification, and may consider placing troops inside North Korea to prevent refugees from crossing the border.

“China could attempt to manage, and conceivably block the unification process,” the report said. “While working to safeguard its own commercial assets, and to assert its right to preserve the northern part of the peninsula within China’s sphere of influence, Beijing might seek to defend its actions as necessary to ensure regional stability.”

Kang said North Korean defectors could play an important role in smoothing reunification but that South Koreans may be reluctant to let them.

“I think it will be difficult for South Koreans to take a light hand in North Korea and let North Koreans lead and … be deeply involved in that process,” he said.

Close coordination between the U.S. and South Korea will be key in dealing with North Korea in coming years, Cha said. President-elect Park Geun-hye has pledged to pursue more engagement with Pyongyang while taking a tough stance against any provocations.

“I don’t think you will see any major initiatives from Obama on North Korea, but I think you could see new initiatives from Madame Park, so the key will be for Washington to stay closely connected with whatever Seoul might do,” he said.