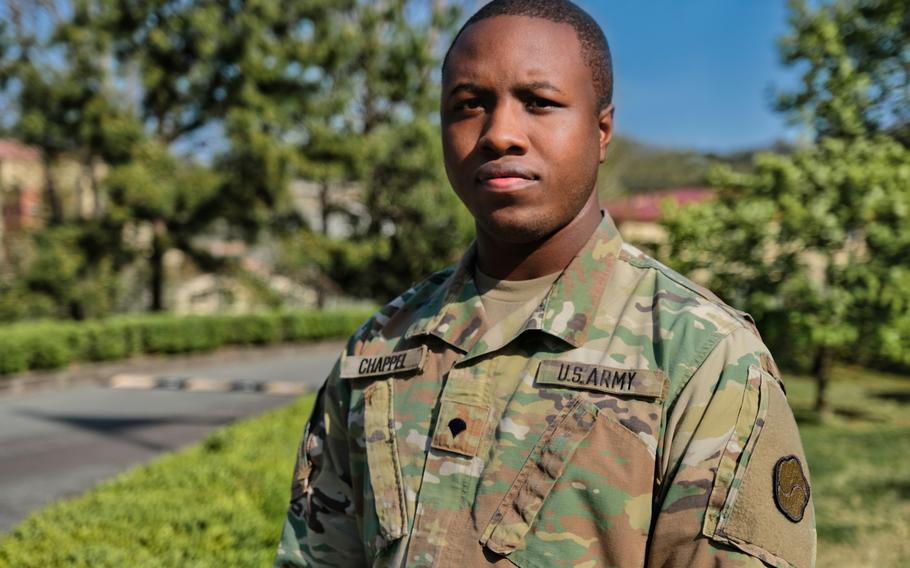 CAMP CARROLL, South Korea — Army Spc. Deontae Chappel, the first U.S. service member to test positive for the coronavirus, was “shocked” but not overly worried when he found out he had the respiratory disease in late February.

But then the 23-year-old network systems clerk learned his wife and toddler also had been infected and would be joining him in a hospital isolation unit on Camp Humphreys, the main U.S. military base in South Korea.

“The saddest thing throughout the entire process was knowing that my wife and daughter caught it. If it was just me, I would say, ‘OK I’m going to prevail,’” Chappel said Tuesday in his first interview since being discharged from medical care.

“But hearing my wife and daughter have it, that’s when it got surreal for me and a little scary,” he told Stars and Stripes.

Chappel, who is assigned to Materiel Support Command - Korea under the 19th Expeditionary Sustainment Command, and his family were cleared of the virus on April 15, ending a nearly two-month ordeal.

During the interview, he confirmed for the first time that his 1 ½-year-old daughter, Alaina, also tested positive.

He said she never exhibited any symptoms and “was just as happy and playful as usual throughout the whole situation.”

“We were in the exact same room since we all tested positive; there was no need to separate us at all,” he said.

USFK previously declined to disclose the child’s condition, saying that was up to the family. However, it said Wednesday that she was included as a military dependent in its 25 cases.

First case Chappel said his wife and daughter had been cleared of the virus earlier, but they all had to remain in home quarantine until he could meet the USFK requirement of two consecutive negative tests separated by 24 hours.

He said his symptoms disappeared after the first week in the hospital, but he continued to test positive with daily swabs — an unpleasant experience he said felt like it was piercing his brain.

“The tests were fluctuating between positive and negative the entire time,” he said, sitting in a conference room in which everyone present was placed a socially distant 6 feet away from each other.

“Luckily my daughter and my wife, they received both their double negatives even before we left Camp Humphreys, so that was a blessing to not have to worry about them,” he added.

“He is a unique case that we are continuing to research and analyze as he could provide some valuable data to similar patients who’ve spent more time than others in isolation,” Murray said Wednesday in an email.

Much remains unknown about the highly contagious virus, which has infected more than 2.5 million people and killed more than 177,000 globally since it first appeared in China late last year, according to Johns Hopkins University.

The incubation period is believed to be up to two weeks, and researchers say the virus is spread through droplets released into the air when an infected person coughs or sneezes. There is no vaccine.

Cause unknown Chappel still doesn’t know how he contracted the coronavirus, although he is stationed at Camp Carroll and lives in an apartment building outside the base in the southeastern city of Waegwan, near the epicenter of the pandemic in South Korea.

U.S. Army Garrison Daegu, which is composed of Camp Carroll and several other installations in the area, initiated gate health checks, restricted base access and banned troops from nonessential travel or social activities outside shortly after the outbreak began around Feb. 19.

The area, which has been the source of more than 60% of the country’s 10,694 confirmed cases to date, was for weeks considered ground zero before the virus began to spread to the United States and other countries.

Chappel, who has been stationed in South Korea since November 2018, said he doesn’t go out much, and it was very cold at the time, so he and his wife were trying to keep their daughter inside as much as possible.

“I’m an introverted person. All I do is play video games and go to work and take pride in my work. From work, I go home. From home, I go to work,” he said.

Trace teams researching his movements over the two-week period preceding his illness also couldn’t find any connections, he said.

Offering advice The Atlanta-area native said he isn’t the type to go to the doctor when he has a cold, but he’s glad he followed the coronavirus guidelines and went to the base clinic when he started coughing and got chills, a minor headache and a sore throat in late February.

“I would definitely tell everyone if you’re feeling sick at all go get checked out. You don’t want to wait until it’s too late and the worst-case scenario happens,” he said.

Chappel was initially tested on Feb. 25 with a swab that was processed by the Korea Centers for Disease Control and Prevention because USFK didn’t yet have its own capabilities. The results came back positive the next day.

The command set up its own lab at the military hospital on Camp Humphreys on March 8, so subsequent tests were done there.

Only one other U.S. soldier has tested positive on the divided peninsula. The other USFK cases involved military dependents, contractors and other American and South Korean civilian employees.

In all, the Pentagon says 3,496 U.S. service members have been confirmed to have the virus as of Tuesday.

Chappel, who is on track to be promoted to sergeant soon, and his wife and daughter were in the hospital for about two weeks before they were moved to a specially designated isolation barracks on Camp Humphreys. They were allowed at the end of March to return home where they remained quarantined and continued to be monitored until their official discharge.

Chappel smiled broadly as he recalled one of his few visitors — USFK commander Gen. Robert Abrams, who donned protective gear and visited him in the hospital on Feb. 29.

“The general in command coming to see me at the hospital was very unexpected to get that much attention at my level but then it was kind of an eye-opener that the Army actual cares,” he said. “It was very comforting.”