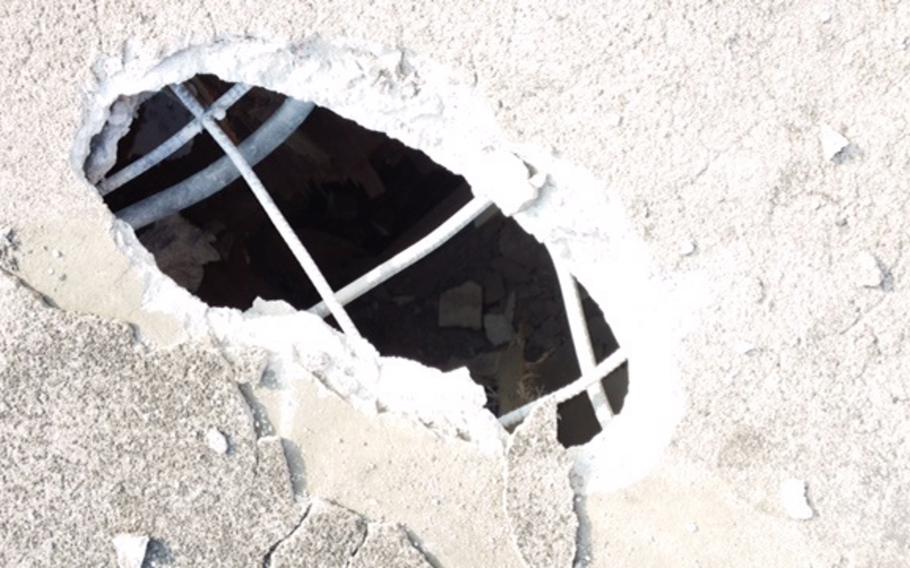 A 105mm round from Rodriguez Range punctured a hole, seen here, in the roof of a nearby home March 29, 2015. Rodriguez Range is about 15 miles south of the Korean Demilitarized Zone. Army officials are investigating the incident. (Courtesy of the Pocheon Fire Department )

A 105mm round from Rodriguez Range punctured a hole, seen here, in the roof of a nearby home March 29, 2015. Rodriguez Range is about 15 miles south of the Korean Demilitarized Zone. Army officials are investigating the incident. (Courtesy of the Pocheon Fire Department ) 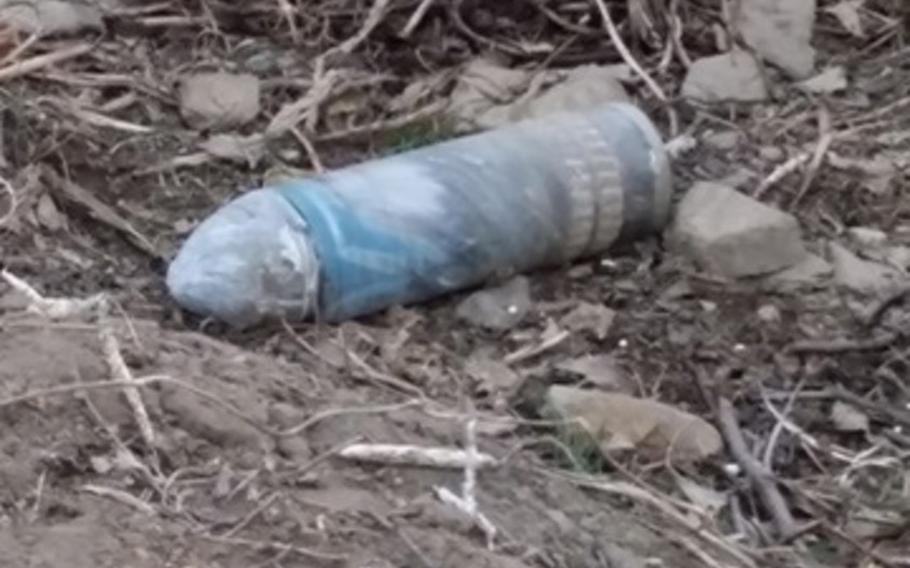 A 105mm training round lies in a field March 29, 2015, after striking the roof of a home near Rodriguez Range, located about 15 miles south of the Korean Demilitarized Zone. Army officials are investigating the incident. (Courtesy of the Pocheon Fire Department ) 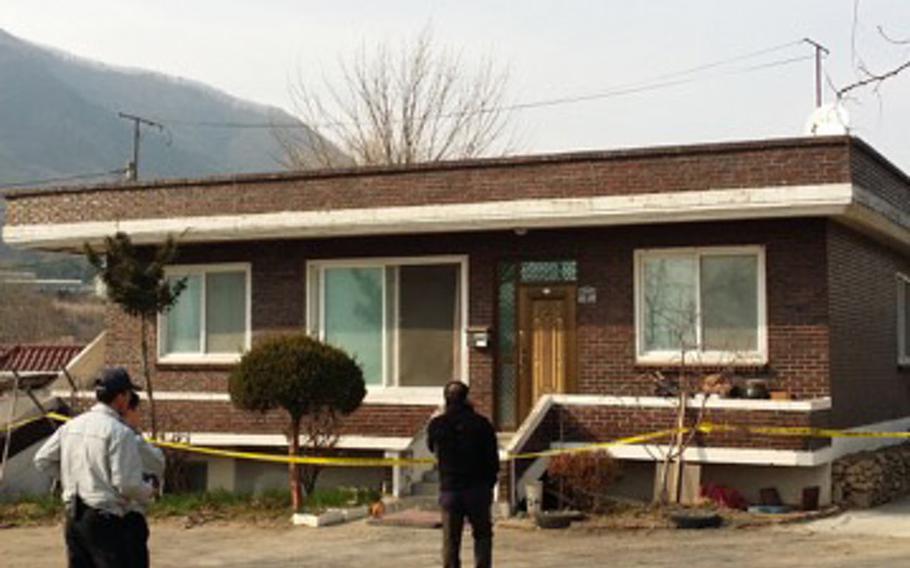 Officials investigate the South Korean home where a 105mm training round struck the roof March 29, 2015, after it originated from nearby Rodriguez Range. (Courtesy of the Pocheon Fire Department) 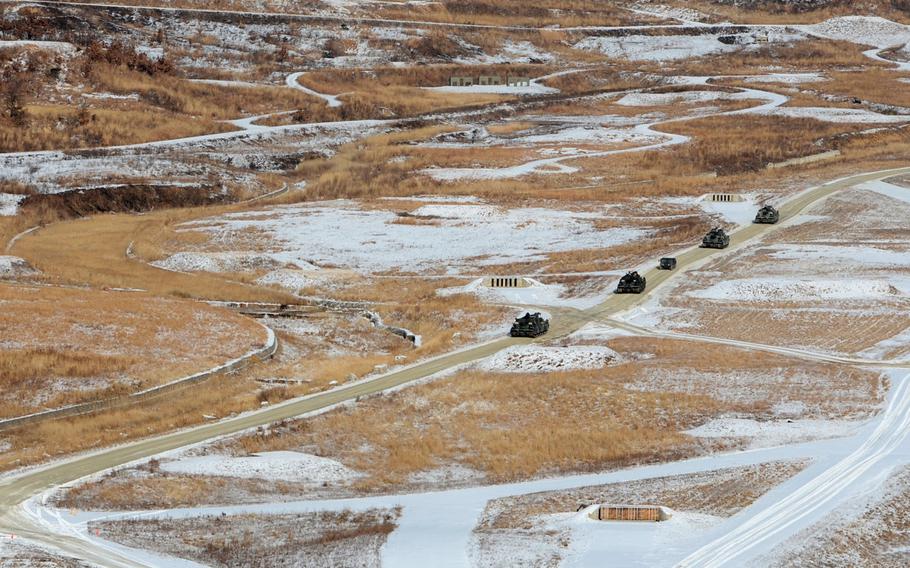 Army 2nd Infantry Division vehicles move during a live-fire exercise at Rodriguez Range in December 2014. On March 29, 2015, a 105mm training round flew off the range and struck the roof of a home in a nearby village. The Army is investigating the cause of the incident. (SeoWon Lee/U.S. Army)

South Korea views the United States more favorably than almost every other country in the world, but history has proven that such goodwill is conditional.

In 2002, a U.S. Army armored vehicle driving on a road in Yangju struck and killed two South Korean girls. As much as the incident itself, the Army’s perceived indifference led to nationwide protests, influenced national elections and left a majority of the country viewing the U.S. unfavorably, according to a Pew Global Attitudes survey released the following year.

The Army’s shift to an “apologize first and determine the details later” approach is one legacy of that 2002 tragedy, when officials generally declined comment while the investigation proceeded.

Flash forward to March 29, when a 105mm training round punctured a roof and ricocheted into a field in a village near the sprawling Rodriguez Range complex, about 15 miles from Korea’s Demilitarized Zone.

Within hours, a two-star general went to the village to make amends, 8th Army officials told Stars and Stripes. The Army cut a check for the homeowner’s inconvenience on the spot, while South Korean soldiers fixed the roof.

Military officials emphasize a long list of safety procedures at Rodriguez Range. Nevertheless, incidents have occurred there periodically over decades, according to local officials.

Although none of the more recent incidents has caused any deaths, the question remains: If another Yangju-type tragedy occurred, would the U.S. face the same severe backlash?

“There is such explosive power if the U.S. attitude ignores South Korean [opinion],” said Kim Joon-hyung, an international politics professor at Handong Global University in Pohang.

However, Kim and others don’t think the U.S. would make that mistake again.

“I really don’t think there would be a repeat of a 2002-type event,” said Moon Chung-in, a Yonsei University political science professor. “It was a total lack of sensitivity on the part of the U.S. command that fueled the discontent with American forces. American commanders in South Korea have been very attentive afterward.”

South Korea’s importance to the U.S. as an ally has grown in recent years, as tensions have increased in the region.

Last year, 82 percent of South Koreans viewed the U.S favorably, according to the Pew survey.

Those figures would be expected to fall if a U.S. military training incident resulted in South Korean deaths, but analysts don’t think U.S. support would collapse so readily.

Before last month’s errant round, residents had planned a demonstration over noise and other incidents.

The potential for tragedy near Rodriguez Range was demonstrated in 1980, when nine residents working as security guards died on their way home after picking up shells that exploded, according to news accounts. At that time, South Korea’s authoritarian government left little room for protest.

Kim Young-woo, a Pocheon lawmaker who represents the nearby residents, said he hoped the military would conduct a thorough investigation of the most recent incident and prevent others.

“We go through shooting training for winning wars and keeping peace on the Korean peninsula,” Kim said. “Unnecessary accidents should not become diplomatic issues, should they?

“If someone is killed by fallen bullets or shells around the Rodriguez firing range, the situation could become lethal to the U.S.-South Korea alliance.”

The Army is conducting an investigation into the incident and will discuss the results with the community near the range upon completion, Army officials said last week.