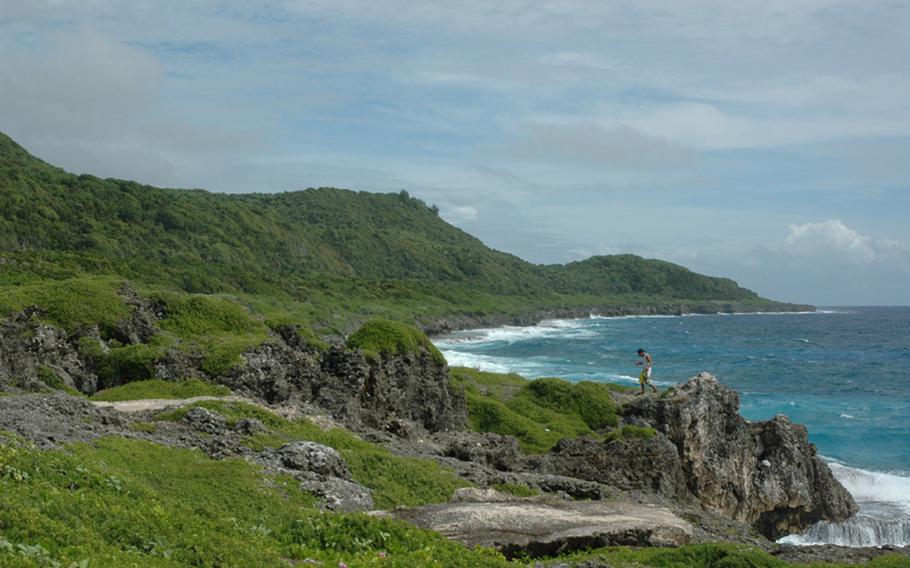 A man walks along Guam's eastern shore in an area near Pagat, the site of an ancient Chamorro village, in the summer of 2010. The military originally proposed putting a firing range adjacent to the village on land stretching further north up the coast. That proposal, despite offers to keep the Pagat area accessible to the public, has not appeased some. Earlier that year, the National Trust for Historic Preservation put the area on its most endangered list. (Teri Weaver/Stars and Stripes)

TOKYO &mdash; The U.S. military&rsquo;s final environmental impact statement on the planned buildup on Guam was released Wednesday as Pentagon leaders continued to meet with local officials on Guam and surrounding islands.

The statement addresses the impact that could result from moving 8,600 Marines from Okinawa to Guam and adding an aircraft carrier berth and an Army air defense unit to the island.

&ldquo;I will not hesitate to make adjustments as the enterprise unfolds to protect the island&rsquo;s infrastructure, services and resources,&rdquo; said Deputy Secretary of Defense William Lynn, the Pentagon&rsquo;s second-ranking official, at a gathering at the University of Guam on Tuesday.

Those adjustments include slowing down the influx of temporary workers needed to build facilities for the move of 8,600 Marines from Okinawa to Guam, a surge that had been estimated to bring almost 80,000 extra people to an island of 178,000.

Now the military says it expects a maximum of about 41,000 extra people in any given year to get the work done.

It&rsquo;s encouraging news for local leaders and residents who have criticized the onslaught of construction materials, workers and new troops expected to descend on the 212-square-mile island.

&ldquo;I think they did recognize they need to slow this down somewhat,&rdquo; said Guam Sen. Judith Guthertz, who chairs the legislature&rsquo;s Committee on the Guam Military Buildup and Homeland Security. &ldquo;That&rsquo;s good.&rdquo;

The slowdown relies on two key solutions addressed in final environmental impact statement but not yet written in stone: realigning construction goals to better control the flow of immigrant workers and materials, and staggering the transition of the Marines from 2014 to 2017.

However, Japan would likely have to approve any changes to the timetable, which was set by a base realignment agreement signed by both countries in 2006.

David Bice, the former Marine general charged with directing the Guam buildup, could not be reached for comment Wednesday.

Unlike with the draft environmental impact statement, which came out last November, the law requires no public comment period for the final statement. After the Navy released its draft statement, more than 10,000 comments flowed in. The military reviewed those and responded in this final draft.

Unless the public has challenges substantially different from those during first comment period &mdash; including from entities such as the Environmental Protection Agency, which issued a harsh critique of an earlier version of the military&rsquo;s plans &mdash; the military is not required to act on new comments or criticisms.

Once the secretary of the Navy signs off on the document, construction can begin.

On Guam, local officials and residents continue to complain that a proposed firing range will encroach upon an ancient Chamorro village and a popular swimming and fishing spot.

In its final environmental statement, the Navy stuck to its plans to put the firing range near the Pagat village site, a move that some local leaders have said will force the military to take the land by legal force. It&rsquo;s a tactic the military has pledged to avoid.

The military did cede one major point: The Navy will continue to seek a home for the carrier berth in Apra Harbor &ldquo;but will defer a decision on a specific site for the transient berth,&rdquo; a notice at the beginning of the report states.

The concession comes after both the EPA and local marine experts complained that the military&rsquo;s plan did little to explore other options in the island&rsquo;s only harbor to avoid dredging as much as 25 acres of coral.

The need for additional land and the fate of the harbor still worry many on Guam, Guthertz said Wednesday.

Once the secretary of the Navy, currently Ray Mabus, signs the plan, &ldquo;they can pretty much do what they want,&rdquo; she said. &ldquo;That&rsquo;s what we&rsquo;re facing.&rdquo;