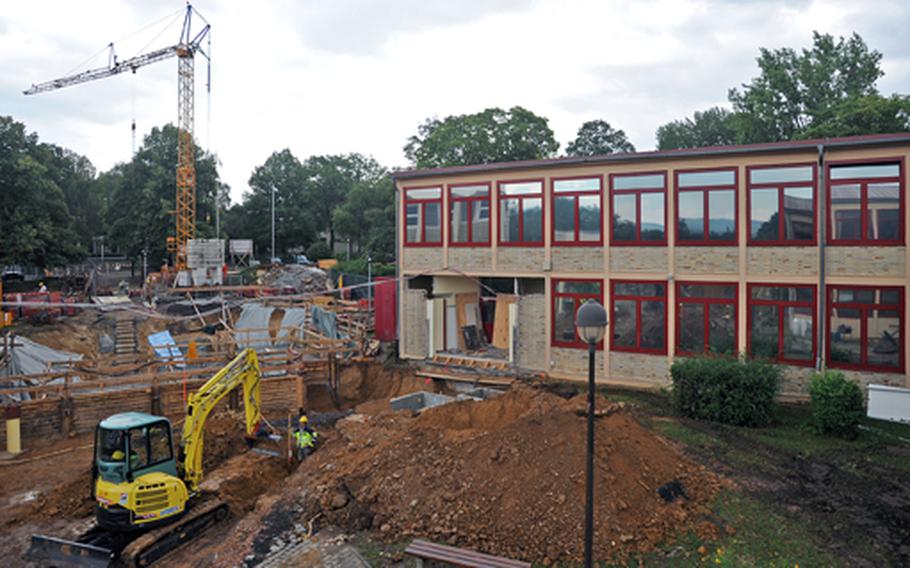 File photo from 2010 of construction of new buildings are underway at Wiesbaden High School, as older buildings are torn down. (Michael Abrams/Stars and Stripes)

MARINE CORPS AIR STATION IWAKUNI, Japan - After decades of neglected and deferred maintenance, more than three-quarters of all Defense Department schools are considered to be in poor or failing condition, according to records released by the Department of Defense Education Activity on Wednesday.

The majority of the department's 191 schools worldwide have aged beyond repair and many others require significant upgrades, prompting the Pentagon to issue an urgent call to Congress for $3.7 billion for repairs and replacements over the next five years, officials announced.

In all, 78 percent of schools for Defense Department dependents were rated as unacceptable, according to the results of a DODEA study. But in the current budget making its way through Congress, school officials are seeking only about 10 percent of the construction funds they will ultimately need, meaning only seven schools are likely to be replaced and two others will be repaired in the next fiscal year.

Many schools are deteriorating from the inside and local districts are left to cover the underlying problems with routine maintenance such as painting and the addition of buildings and temporary space, according to DODEA documents and recent interviews with officials.

"Our facilities, the majority of them are over 45 years old and &hellip; the life expectancy of a school is 45 years," said Russ Roberts, chief of logistics for DODEA. "So, that contributes a lot to the conditions, just the age alone."

The agency said it is hoping for an unprecedented $3.7 billion funding windfall from Congress over the next five years to modernize 134 schools in the United States and overseas that suffer from deteriorating roofs, plumbing, electrical wiring, and heating and cooling systems. Some schools, such as the seven schools in the Heidelberg and Mannheim communities in Europe, aren't on the list to be modernized because those military installations are due to close.

Many of the school facilities were built during the Cold War - some as long ago as the 1930s and 1940s - and would be more expensive to repair than replace, according to the agency surveys from 2008 and 2009.

"If [the electrical system] has been there for 40 years, think about the technology that's changed and all of the power requirements that we are pulling out of it," Roberts said.

Problems range from aging plumbing that emits the smell of sewage to an extreme example of deterioration at Seoul American Middle School, where staff reported rats and mold earlier this year. Conditions at Seoul American prompted $600,000 in repairs this summer.

In Germany, a school with freshly painted walls, bright clean floors and new lockers lining the hallways earned one of the poorest ratings among 81 military schools in Europe.

"It's in the air, it's behind the plaster," said Wayne Hartmann, Department of Defense Dependents Schools-Europe chief of logistics. "We regularly paint our buildings. We keep them safe and hygienic. They generally look pretty good."

DODEA officials have said that the widespread maintenance problems do not constitute a safety risk to students and teachers. Buildings adhere to federal and international building codes and are inspected twice a year, the agency said.

The first installment of redevelopment funding could come this fall in the National Defense Authorization Act, which will soon be finalized by Congress. In May, the House approved $345 million for school construction efforts in its version of the budget bill. The Senate version, expected to be voted on next month, contains $439 million.

Both chambers hope to pass a compromise authorization bill before Oct. 1, the start of fiscal 2011. But other controversial items in the legislation - such as a "don't ask, don't tell" repeal - could delay that process until later this year. If so, the school construction funds could be held up for weeks or months.

The plan comes at a time when funding is tight and DOD is looking to cut its budget. On Monday, Defense Secretary Robert Gates announced a broad outline to cut spending that included eliminating several DOD entities and trimming senior ranks and civilian jobs.

The five-year schools plan requires annual installments of funding that must be reviewed and approved by Congress, Kelly said.