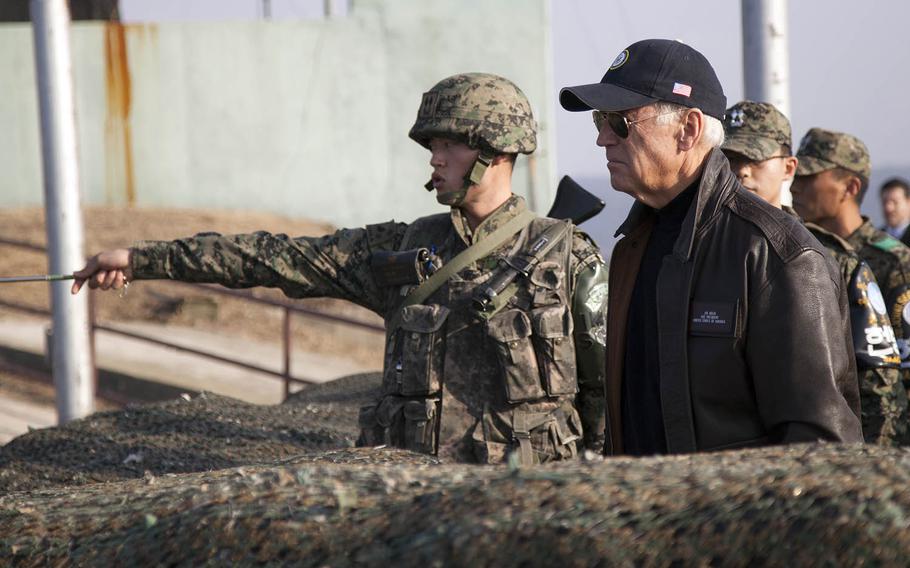 A new U.S. administration will likely move quickly to resolve a rift with South Korea over the costs of supporting 28,500 American troops on the divided peninsula, defense experts said Tuesday.

President Donald Trump has consistently called on U.S. allies to pay more for their own defense as a cornerstone of his “America First” policy. Seoul and Washington have been at loggerheads over Trump’s demand that South Korea substantially increase the amount it pays to host a U.S. military presence.

Because of the stalemate, which has been going on for two years, some 9,000 South Korean base workers have been caught in the middle. The contract, known as the Special Measures Agreement, is used in large part to pay the bulk of their wages.

As recently as last month, U.S. Forces Korea warned workers that they may be furloughed again next year if the dispute isn’t resolved.

However, U.S. and South Korean defense experts said the Jan. 20 inauguration of President-elect Joe Biden would result in quick action on the issue.

A Biden administration would be much more reasonable about increases to host-nation support and would resolve the matter fast, Michael O’Hanlon, a senior fellow at the Brookings Institution, told Stars and Stripes in an email Tuesday.

A similar prediction was offered by Ralph Cossa, a former Air Force officer and president emeritus of the Pacific Forum think tank in Hawaii.

“They will likely ask for something a bit better than previously offered but there will be no appearance of ‘extortion’ and I expect both sides will come to terms relatively quickly,” he wrote in an email Tuesday.

The allies would likely settle on South Korea’s most recent offer, to increase the amount it pays to support U.S. troops by 13%, according to Kim Hyun-wook, an American studies professor at Korea National Diplomatic Academy.

Kim, in a phone interview Thursday, said a Biden administration will be preoccupied with domestic issues in a divided nation that include the coronavirus, the economy and climate change and won’t prioritize foreign policy.

Biden will focus on restoring alliances based on the liberal international order, Kim added.

“The US doesn’t have as much capability as it had in the past,” he said. “It can’t do it alone and needs help and allies.”

Biden might intervene to restore relations between South Korea and Japan, Kim said.

The neighboring nations are at odds over an island territorial dispute and South Korean efforts to gain compensation for Koreans who say they were forced into labor or prostitution by Imperial Japan.

Trump met several times with North Korean leader Kim Jong Un, though the pair failed to reach a deal to denuclearize the peninsula. In contrast, Biden, in the final presidential debate last month, likened Kim to Adolf Hitler. Biden has also said he would not meet with Kim unless the North agrees to denuclearize.

“He’s talked about his good buddy, who’s a thug,” Biden said. “That’s like saying we had a good relationship with Hitler before he invaded Europe.”

North Korea’s official Korean Central News Agency has called Biden a “rabid dog” that must be “beaten to death.”

However, North Korea will be a low priority issue for Biden, who might not act on it until late next year, according to Kim Hyun-wook. North Korea may become impatient but its reaction will depend on China, he said.

“If North Korea believes China will back them, they might test an [intercontinental ballistic missile],” he said.

O’Hanlon said he hopes to see efforts to secure a partial deal with North Korea rather than complete near-term disarmament.

However, Cossa predicted fireworks from the North ahead of the new president’s Jan. 20 inauguration.

“I expect the North will do something to get everyone’s attention,” he said. “Kim doesn’t mind being hated but hates to be ignored.”