Defense Department requires coronavirus test before all overseas travel from US 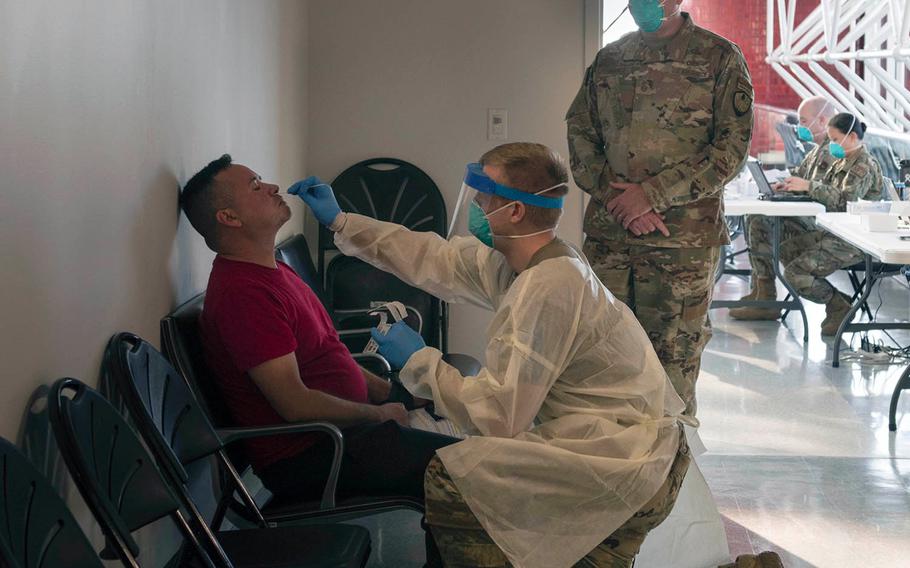 All U.S. military travelers heading overseas on orders must test negative for the coronavirus no more than three days before departing the United States, according to a Navy administrative message Thursday.

The Defense Department mandate requires service members, Defense Department civilian employees, contractors and family members to have proof of a negative test result for COVID-19 within 72 hours of departing for their destination. COVID-19 is the respiratory disease associated with the coronavirus.

“Many countries now require negative test results before arrival,” Chief of Navy Personnel Adm. John Nowell Jr. said in the message. Proof of a negative test provides a measure of insurance against being refused travel outside the U.S. or denied entry to another country, he said.

South Korea on Friday started to require incoming travelers, including people covered by the status of forces agreement with the U.S., to provide proof of a negative test. Japan has the same requirement, but U.S. military travelers were not required to provide that proof, according to U.S. Forces Japan.

The U.S. commands in both countries mandate tests for their people upon arrival, along with subsequent tests and a mandatory quarantine period.

Under the new requirement, military travelers must “take responsibility” and arrange their own tests, according to Nowell.

The military has designated testing sites at Walter Reed National Military Medical Center in Bethesda, Md., and at Madigan Army Medical Center at Joint Base Lewis-McChord, Wash., but travelers are expected to ensure they meet all requirements.

The Army in August began requiring all soldiers and their families to test negative and quarantine two weeks before leaving the U.S.

The Air Force in November began randomly selecting up to 15% of passengers on Patriot Express flights from Seattle and Baltimore for testing before takeoff. The Patriot Express is a government-contracted passenger service between the U.S. and overseas bases.

Military hospitals may provide free tests for service members and their dependents who bring their overseas orders to a scheduled appointment, according to the message.

Results of tests by commercial providers are also acceptable. Travelers must pay the fees if they’re tested at a non-military site but may submit a reimbursement claim. The military’s Tricare health insurance “does not fund strictly travel-based tests,” according to the policy.

Those who test positive must immediately quarantine. An entire family of travelers must quarantine if one member tests positive, according to DOD policy.

The Navy recommends molecular tests, such as polymerase chain reaction, or PCR tests, but will accept rapid antigen tests, according to the policy. Antigen tests “detect specific proteins from the virus” and can produce a false positive result if the patient has ever had the coronavirus, according to the Federal Drug Administration.

Because entry requirements vary between countries, travelers should verify the specific requirements at their destination “to avoid delays, fines or other complications upon arrival,” according to the Navy message.

Those who have been vaccinated against the coronavirus are not exempt from the testing requirement, according to Nowell.

Further information about the requirement is available at the Navy Personnel Command website.Doornbos.caitlin@stripes.com Twitter: @CaitlinDoornbos