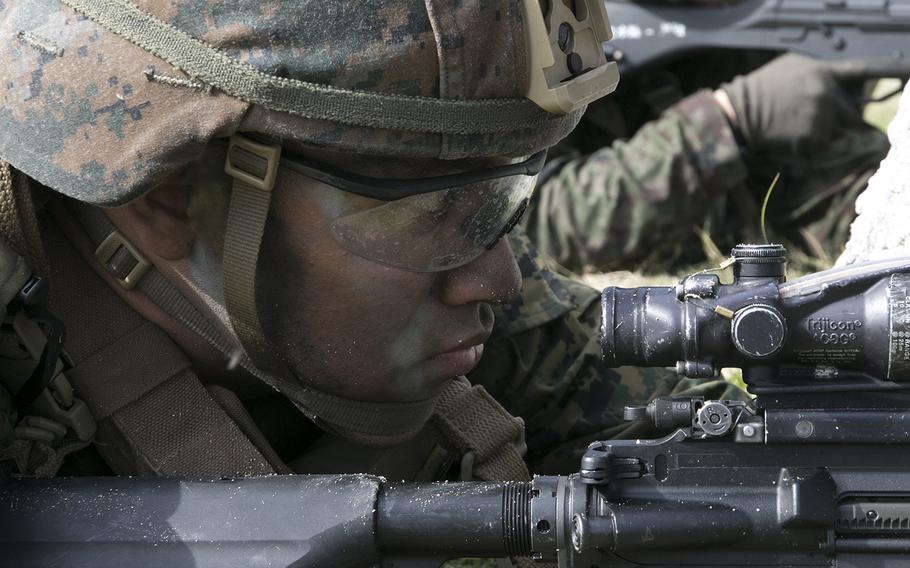 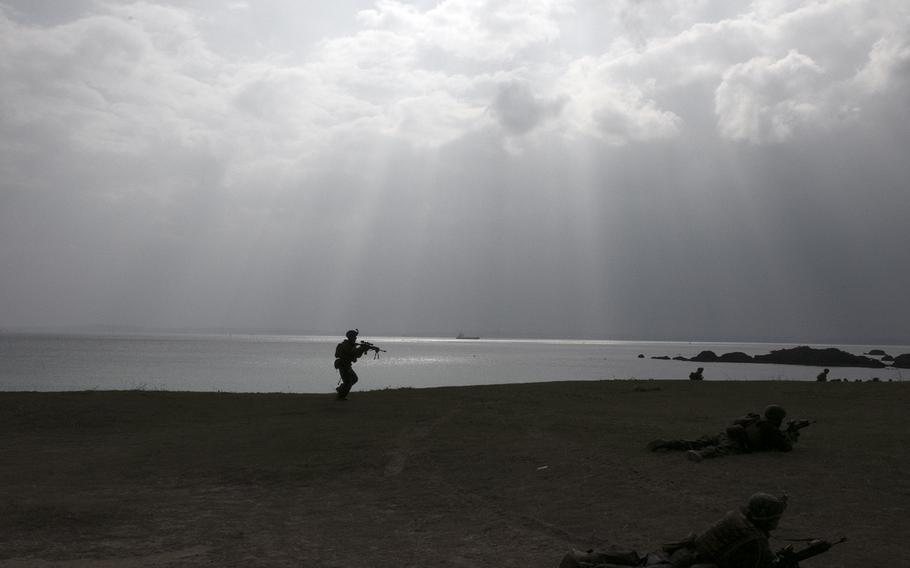 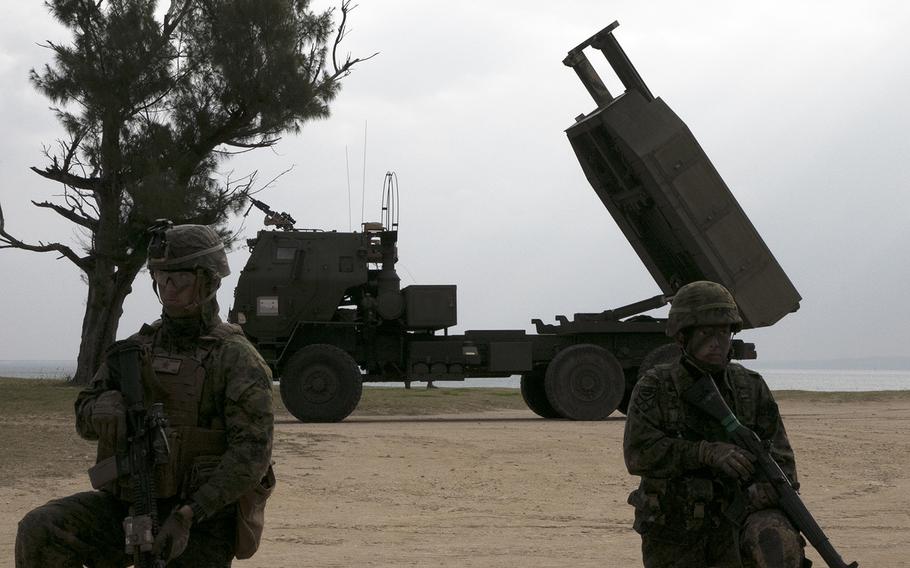 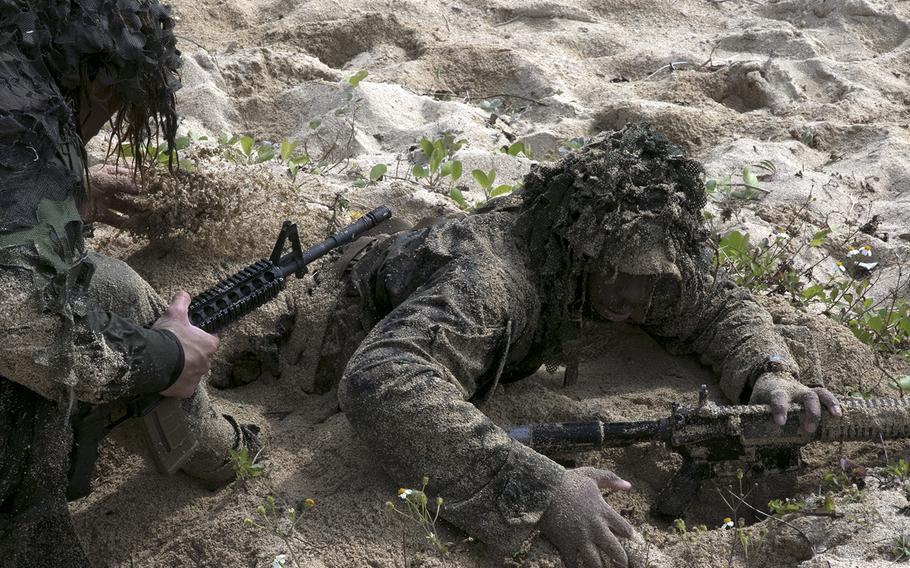 Buy Photo
A member of the 31st Marine Expeditionary Unit is camouflaged with sand during an amphibious exercise on Kin, Okinawa, Sunday, Feb. 9, 2020. (Matt Burke/Stars and Stripes) 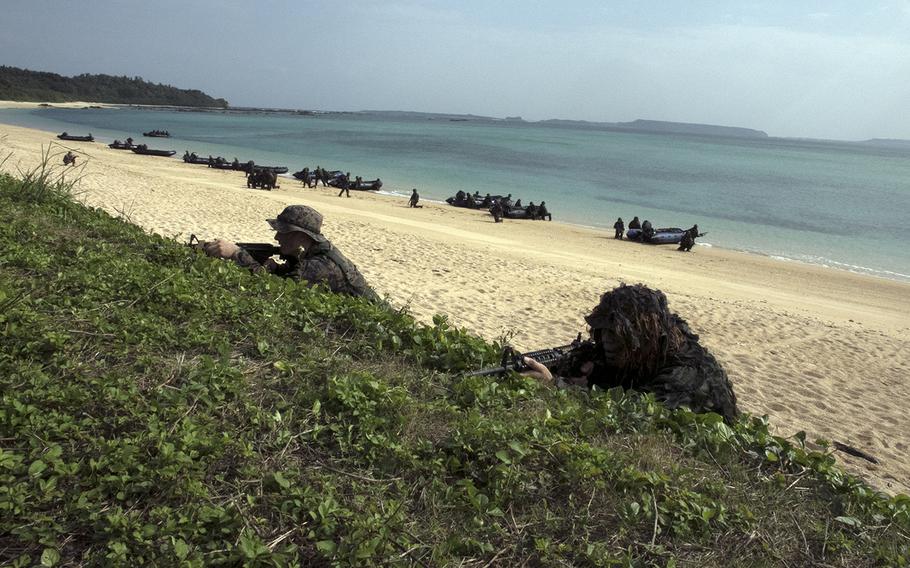 KIN, Okinawa — A new Japan Ground Self-Defense Force unit joined with the outfit it most resembles, the U.S. Marines, for a series of firsts during a recent exercise on Okinawa.

The JGSDF Amphibious Rapid Deployment Brigade and a landing team from the 31st Marine Expeditionary Unit hit the beach Sunday to simulate battle with an enemy force. The units deployed together from the America Expeditionary Strike Group for the first time.

The Marines notched another first by deploying an M142 High Mobility Artillery Rocket System, or HIMARS, to the beach using a landing craft air cushion and simulating a rocket launch. They are the first Marine expeditionary unit to have an attached HIMARS platoon.

The exercise, which began Jan. 25 and ends Thursday, is designed to strengthen the allies’ amphibious capabilities, especially small-boat operations, officials from both militaries said. Sunday’s drill featured about 150 Marines and 60 Japanese troops.

“This is a great day,” 31st MEU commander Col. Robert Brodie said at the conclusion of the simulated raid.

The exercise also demonstrated how the Navy, in this case Amphibious Squadron 11 under Capt. Richard Lebron from Sasebo Naval Base, the Marine Corps and the JGSDF brigade could work together in a crisis response, Brodie said.

Japan launched the amphibious brigade — modeled after the U.S. Marine Corps — in 2018 as a force to retake island territory should it fall to another power. China, for example, disputes Japan’s claim over the small, isolated Senkaku Islands. The brigade is based at Camp Ainoura, northwest of Sasebo in Nagasaki prefecture.

They landed and linked up with Marines already hiding on the beach. Some buried their flippers and camouflaged themselves with sand. Others, in ghillie suits typically worn by snipers, took positions behind a seawall.

The assaulting Marines and their Japanese counterparts, covered in sand and saltwater, charged inland, maneuvering through smoke, around obstacles and firing blank rounds at their enemy.

Meanwhile, the hovercraft came ashore from the amphibious transport dock USS Green Bay and unloaded the HIMARS, which simulated a rocket launch as the Marines and Japanese soldiers fanned out to set up a security perimeter. In no time, the units then receded back into the sea.

“We’ve been working together for the past two weeks now building up to this point, doing practices on the ship, on the shore, out on the water,” said Marine boat company commander Capt. Philip Hanf. “It all came together today. Overall, it’s been a very beneficial and extremely good experience.”

“My guys have gained a lot from working with them,” he said of the JGSDF. “It’s been interesting to see best practices and how the Japanese operate and some of the similarities and some differences.”

The exercise was intended to “improve tactics and combat capabilities” of personnel involved and to “strengthen cooperation between Japan and U.S. personnel on the unit level,” a JGSDF statement said. It also stated that the exercise would improve Japanese helicopter pilot skills through deck landing practice.

“This is the first time such amphibious training was conducted on Okinawa,” a JGSDF spokesman in Tokyo said Monday. Some government officials in Japan customarily speak on condition of anonymity. “This is not an annual exercise.”

The Okinawa exercise overlapped with another in Southern California, Iron Fist, also for the first time involving the JGSDF rapid deployment brigade, at Camp Pendleton. That 5-week exercise wraps Feb. 21 and includes a range of activities, from marksmanship drills to assault training, logistics and fire support, according to a Marine Corps news release.