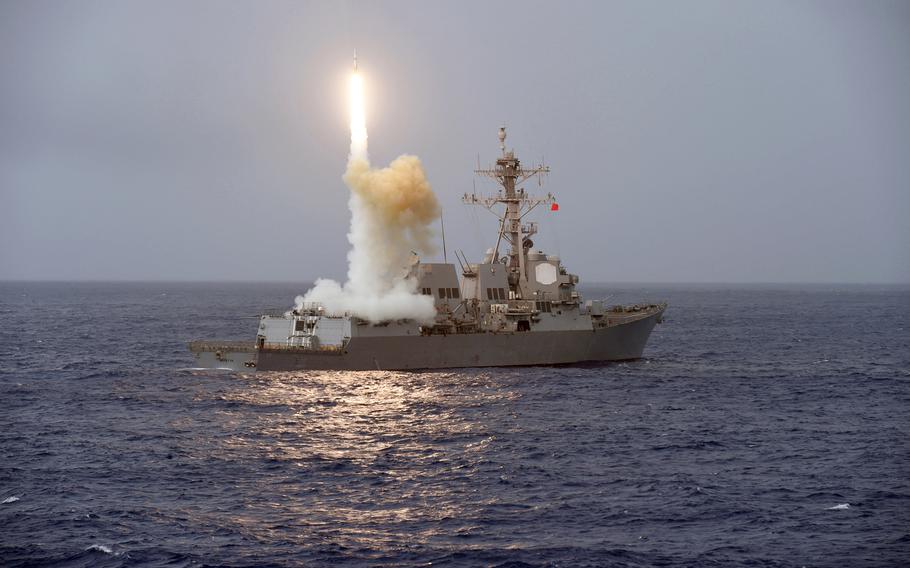 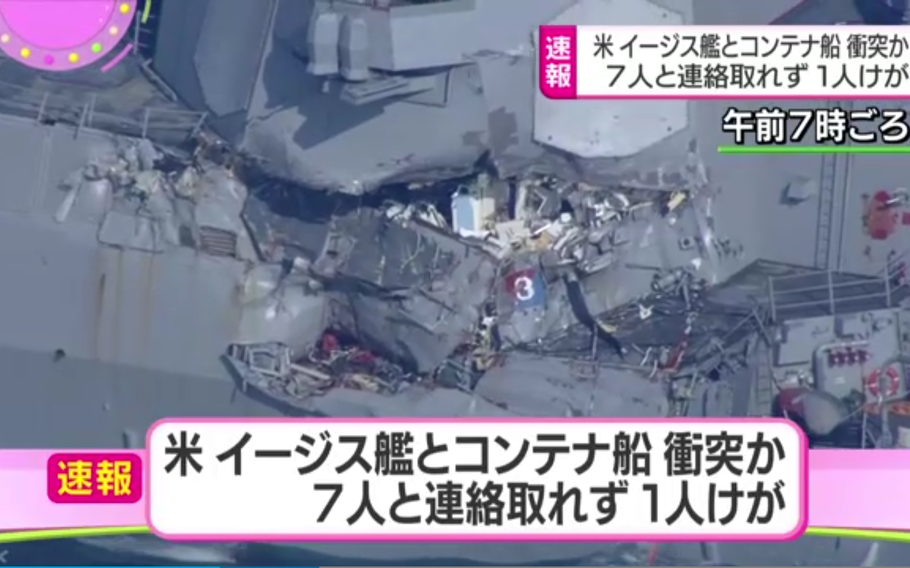 Live footage shot from a helicopter Saturday morning by Japanese broadcaster NHK showed heavy damage to the mid-right side of the USS Fitzgerald , which appeared to be stationary in the water. (Screenshot via NHK) 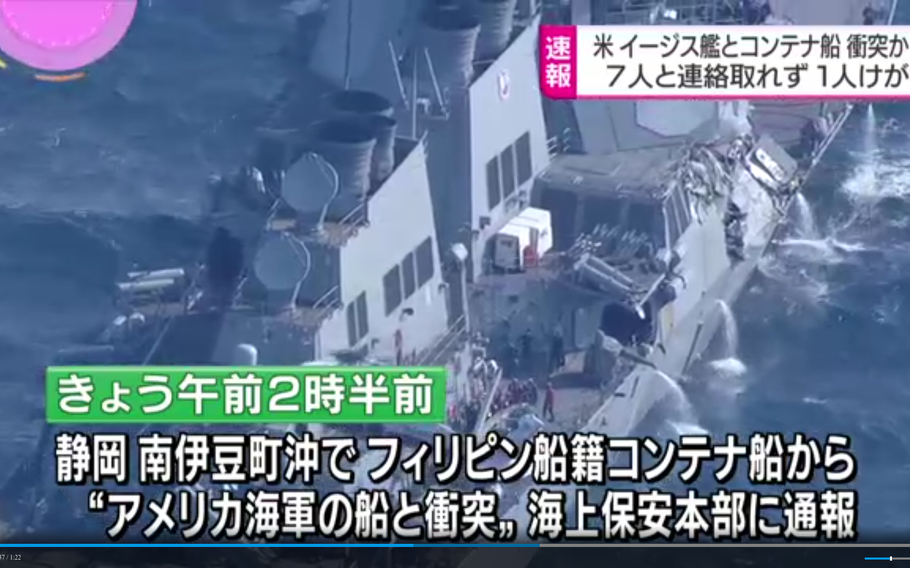 Live footage shot from a helicopter Saturday morning by Japanese broadcaster NHK showed heavy damage to the mid-right side of the USS Fitzgerald, which appeared to be stationary in the water. (Screenshot via NHK) 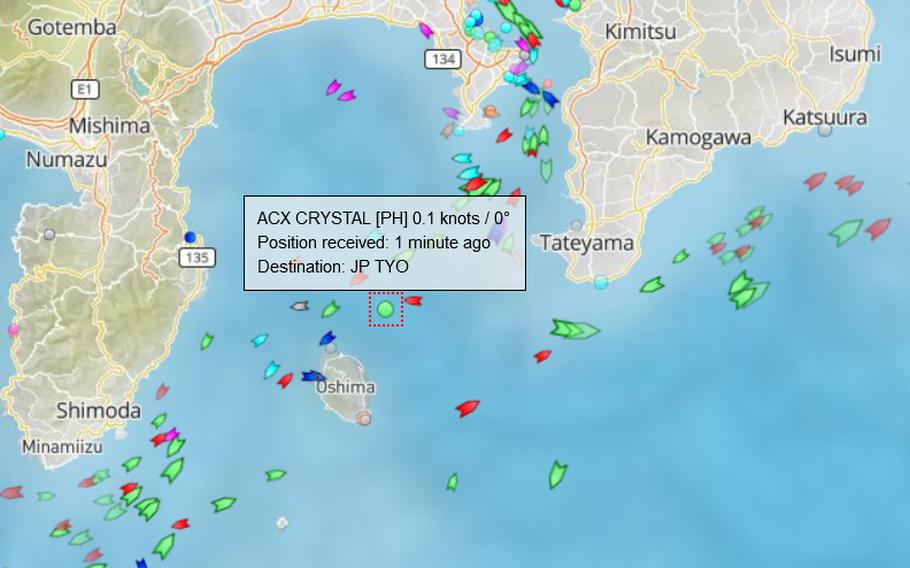 The ACX Crystal, shown here on a satellite map at about 10:30 on June 17, 2017, was reportedly involved in a collision with the destroyer USS Fitzgerald during early morning hours. Marine traffic heading out of Tokyo Bay is normally heavy. (Screenshot via marinetraffic.com) 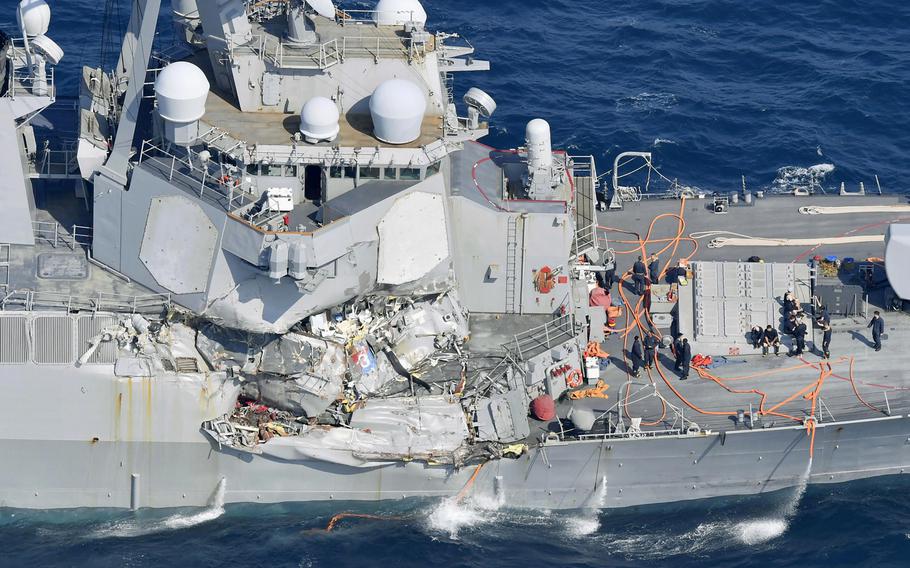 The damage of the right side of the USS Fitzgerald is seen off Shimoda, Shizuoka prefecture, Japan, after the Navy destroyer collided with a merchant ship, Saturday, June 17, 2017. The U.S. Navy says the USS Fitzgerald suffered damage below the water line on its starboard side after it collided with a Philippine-flagged merchant ship. (Iori Sagisawa/Kyodo News via AP) 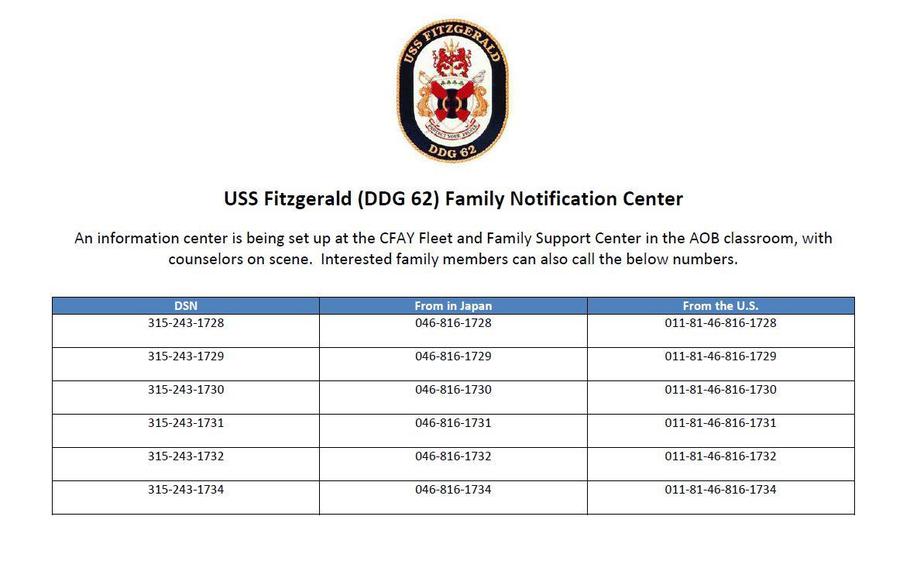 An information center staffed with counselors has opened at Yokosuka Naval Base's Community Readiness Center to brief the families of USS Fitzgerald crew members after the destroyer collided with a merchant vessel off the Japanese coast, Saturday, June 17, 2017. (via U.S. Navy 7th Fleet) 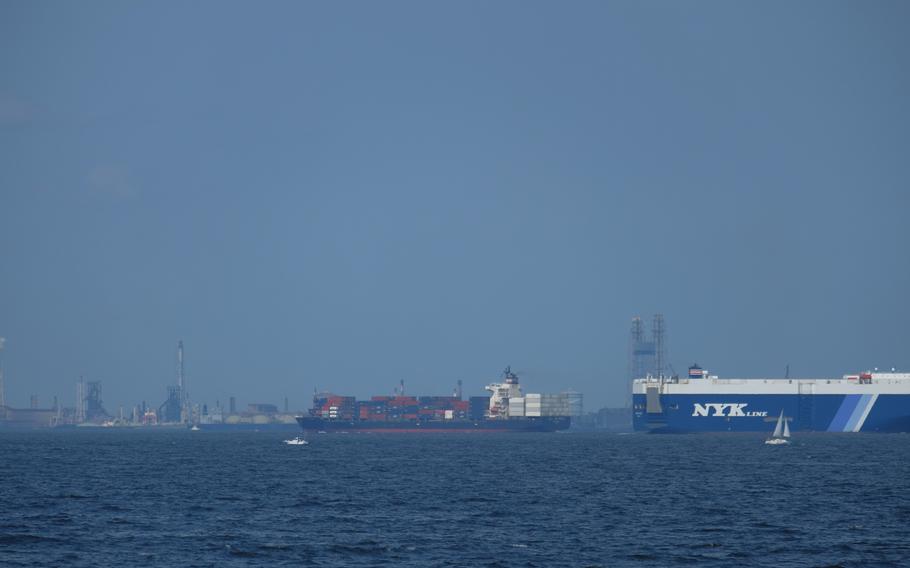 The Philippine-flagged ACX Crystal merchant vessel transits through Tokyo Bay, passing Yokosuka Naval Base, Japan, after colliding with the USS Fitzgerald early in the morning June 17, 2017. (Tyler Hlavac/Stars and Stripes) 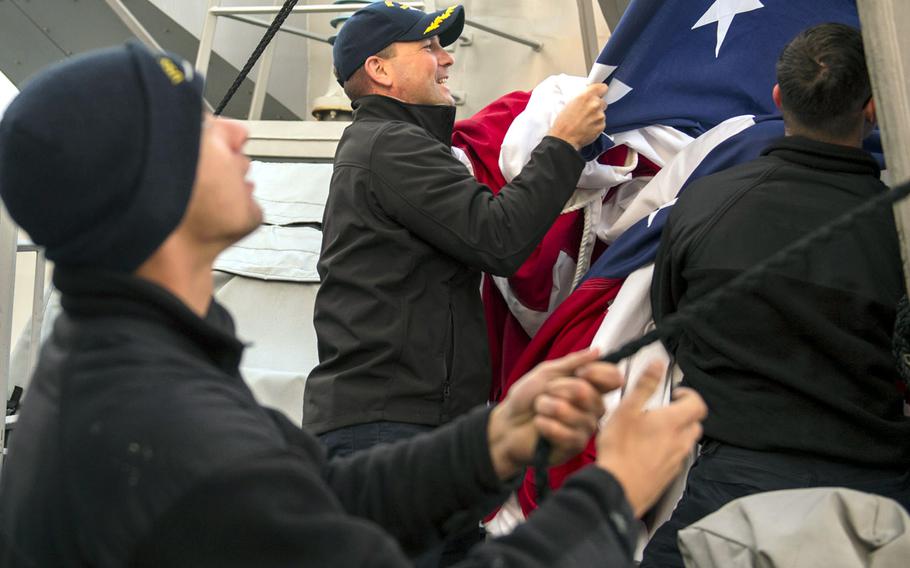 Cmdr. Bryce Benson, commanding officer of the destroyer USS Fitzgerald, brings down the ensign while serving aboard the ship in the Pacific Ocean as executive officer in February 2016. Benson sustained serious injuries but was reported in stable condition following a collision between the Fitzgerald and a larger cargo ship in waters about 64 miles southwest of Yokosuka, Japan, on June 17, 2017. (Eric Coffer/U.S. Navy) 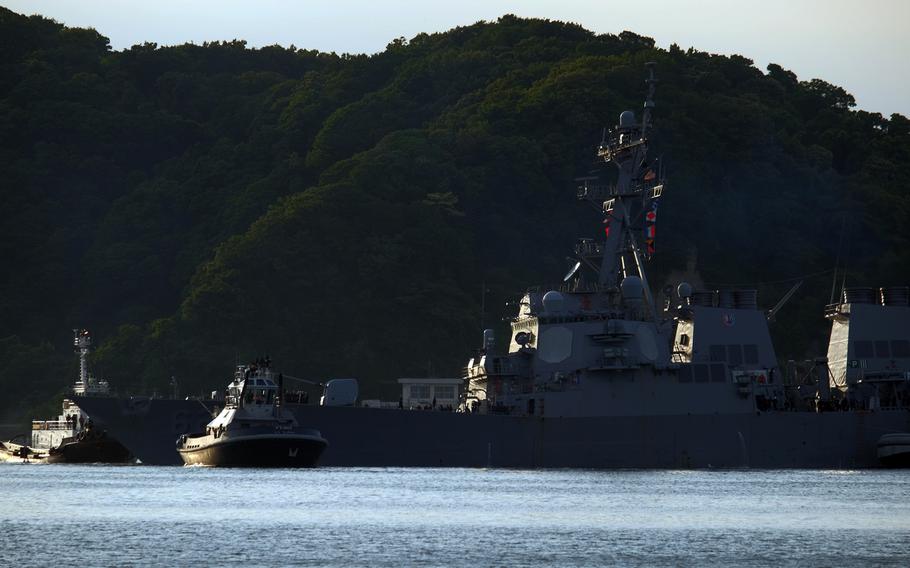 The USS Fitzgerald being pulled into Yokosuka Naval Base, Japan, with assistance from tug boats on Saturday, June 17, 2017. (Tyler Hlavac/Stars and Stripes) 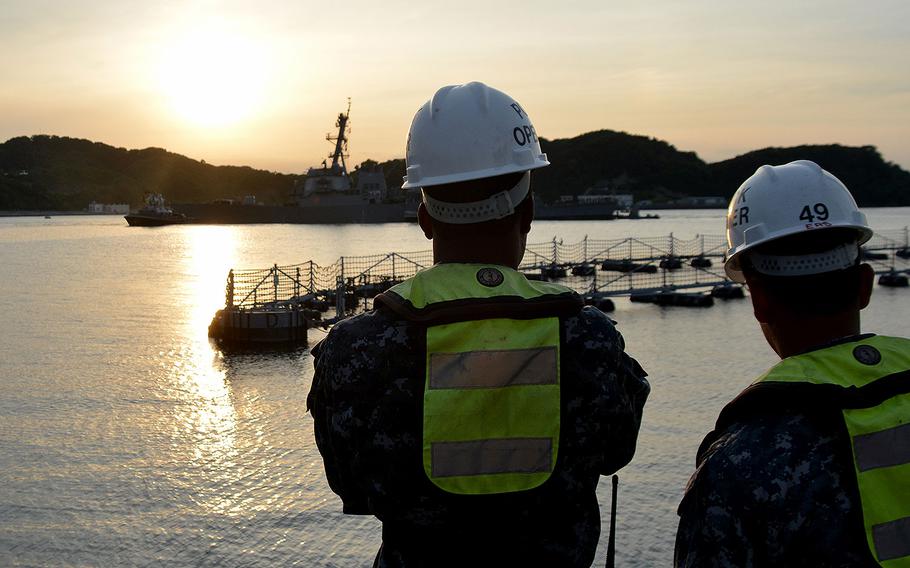 Sailors watch pier-side as the destroyer USS Fitzgerald returns to Fleet Activities Yokosuka on June 17, 2017 after a collision with a merchant vessel while operating southwest of Yokosuka, Japan. (Peter Burghart/U.S. Navy) 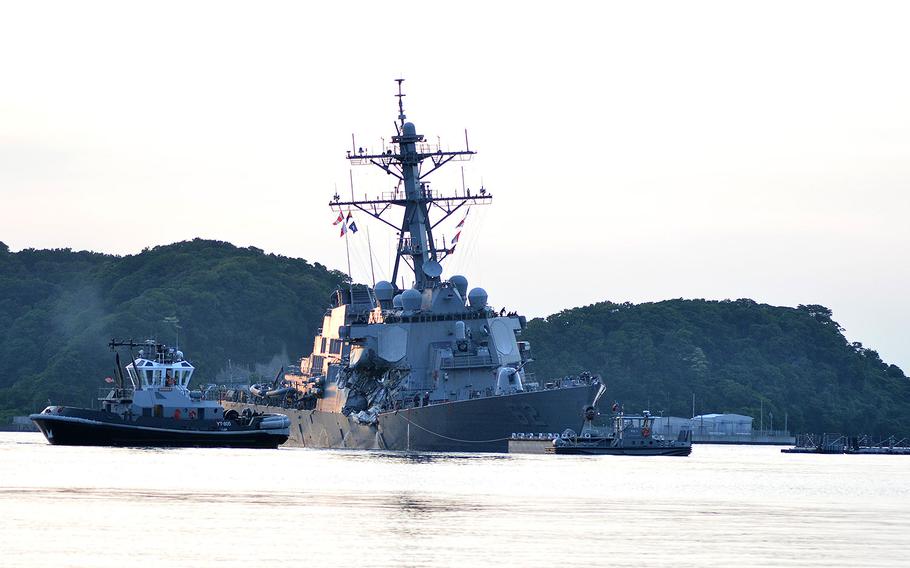 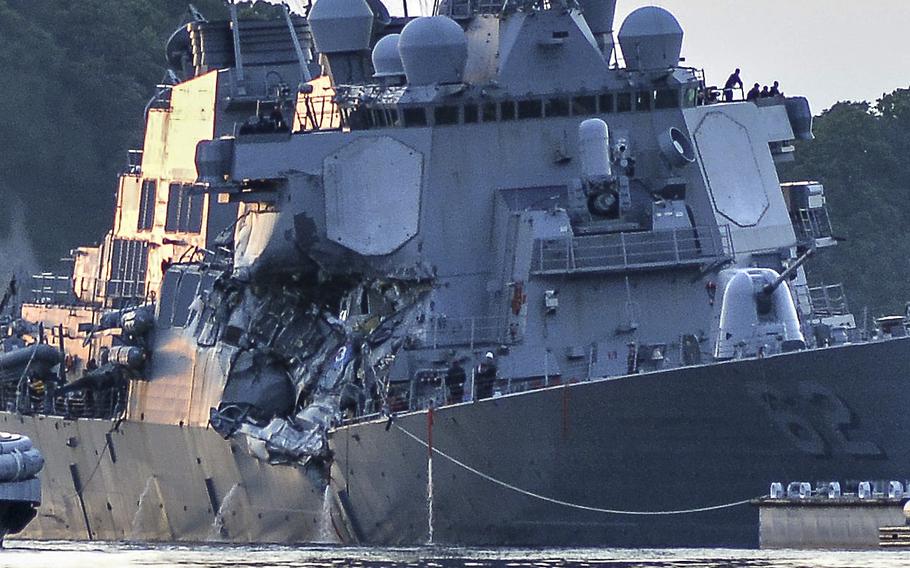 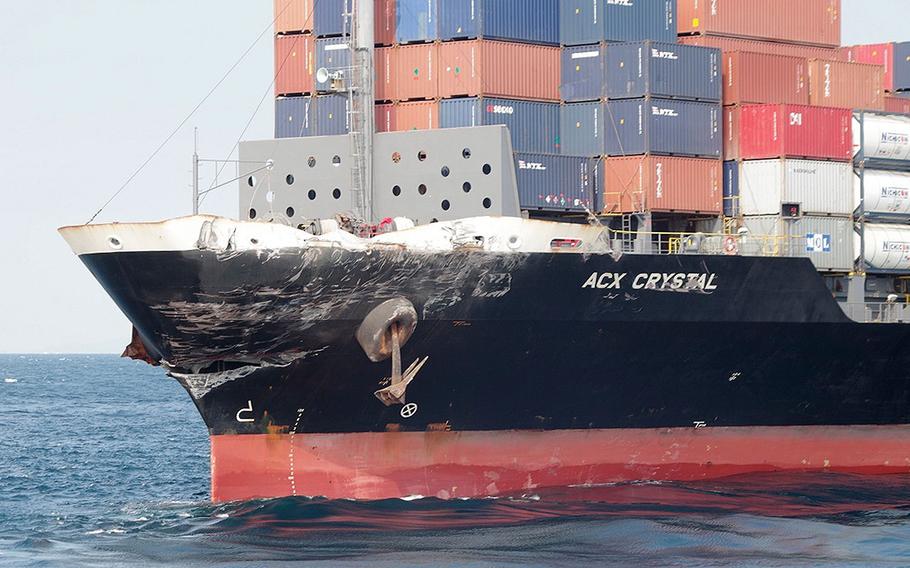 Damage to the Philippine-registered container ship ACX Crystal is seen in the waters off Izu Peninsula, southwest of Tokyo, after it collided with the USS Fitzgerald, Saturday, June 17, 2017 (Japan's 3rd Regional Coast Guard Headquarters via AP) 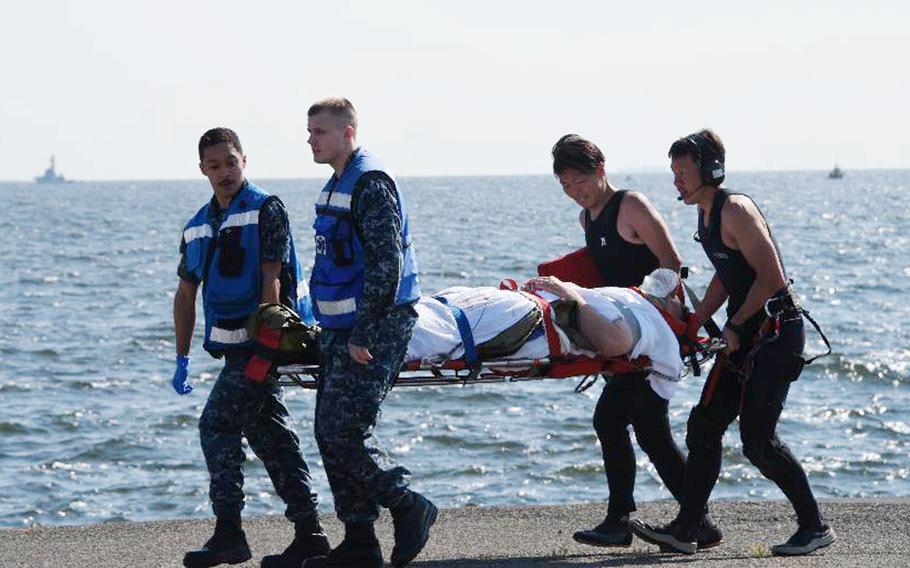 An injured person from the USS Fitzgerald personnel is carried by U.S. and Japanese personnel, at U.S. Naval Base Yokosuka, Japan, on Saturday, June 17, 2017, after the U.S. destroyer collided with a Philippine-registered container ship ACX Crystal. (Japan's Defense Ministry )

YOKOSUKA NAVAL BASE, Japan – Seven sailors are missing and three more, including the commanding officer, were confirmed injured after the USS Fitzgerald collided with a merchant vessel early Saturday off the coast of Japan.

The other two injured sailors, who received lacerations and bruises, were flown to the same hospital, 7th Fleet announced on its Facebook page.

In a tweet Saturday morning, President sent out his condolences to the ship's crew and their families as well as thanking Japan for its help in the accident.

The collision happened about 2:30 a.m. Saturday about 64 miles southwest of Yokosuka near the Izu Peninsula, a Navy statement said.

The Fitzgerald was damaged above and below the water line on the starboard side near the bridge, a Navy official said.

Flooding had been stabilized and sailors from the guided-missile destroyer USS Dewey were assisting with “damage control efforts,” according to an early afternoon tweet from the 7th Fleet’s official account.

U.S. helicopters and a P-8 Poseidon aircraft were also assisting, said the Navy official, who did not know how it was discovered that the sailors were missing but said after any type of incident like this there would be a muster to ensure all hands were accounted for.

The Fitzgerald arrived back in Yokosuka Naval Base's harbor sometime around 6 p.m. Saturday, with tugboats assisting the ship's return.

"This has been a difficult day," Vice Adm. Joseph P. Aucoin, the commander of the 7th Fleet, said in a statement. "I am humbled by the bravery and tenacity of the Fitzgerald crew. Now that the ship is in Yokosuka, I ask that you help the families by maintaining their privacy as we continue the search for our shipmates."

An information center has been opened at Yokosuka’s Community Readiness Center to brief crew members' families on the situation. Base spokesman Sean Kelly said the center is staffed with counselors, chaplains and has child care available.

“[Yokosuka Naval Base] has established a family assistance center to relay information to family members here and back in the states,” he said. “We have support. We’re here for the families.”

Kelly said the center received roughly 100 calls an hour during the first several hours, and roughly 40 family members of Fitzgerald crew arrived to receive briefings on the situation.

“[Yokosuka Naval Base] is working as part of a team along with USS Fitzgerald ombudsmen, family readiness group and senior leadership spouses,” Kim said.

“We have mobilized our staff of volunteers, ombudsmen and chaplains on this base to be available to any family members who have questions or needs.”

Limited information was available for some families from the phone bank around 1 p.m. Saturday, as Navy officials continued to assess the situation.

Lisa Rosenau was still awaiting news on her son, Christopher Rosenau, 22, a sailor aboard the ship. She last heard from him a few days ago.

“We’re just pretty worried,” she said via phone from Wausau, Wis. “I just saw [news of the incident] on Facebook. The family is worried. We just want to know if he’s OK or not.”

Rosenau received a message from her son shortly after the ship's return to port, saying that he was safe.

Chief of Naval Operations Adm. John Richardson said his thoughts and prayers are with the Fitzgerald crew and their families.

“U.S. and Japanese support from the Navy, Maritime Self Defense Force and Coast Guard are in the area to ensure that the Sailors on USS Fitzgerald have the resources they need to stabilize their ship,” he said in a statement. “As more information is learned, we will be sure to share it with the Fitzgerald families and when appropriate the public. Thank you for your well wishes and messages of concern.”

Officials identified the merchant vessel as the Philippine-flagged ACX Crystal. The ship is 29,060 tons and 730 feet long, according to MarineTraffic.com. Destroyers like the Fitzgerald are roughly 8,230 tons and 505 feet long.

The container ship was berthed at Tokyo's Oi wharf, where officials began questioning crew members about the cause of the nighttime crash, according to The Associated Press.

ACX Crystal’s automatic tracking system shows the ship steaming east at about 21 mph before slowing down slightly and abruptly circling back west, according to public data shown on MarineTrafffic.com.

The data shows the ship returning full circle to a previous point at about the time of the reported incident. The ship then travels at about 4 mph shortly afterward before returning to full speed and heading toward Tokyo Bay.

While the path appears unusual compared to other ships in the area at the time, which did not deviate from relatively straight courses.

Conditions were clear at the time of the collision, though Yutaka Saito of the coast guard told The Associated Press that the area is particularly busy with sea traffic.

The container ship's left bow was dented and scraped, but it did not appear to have sustained any major structural damage, according to the AP. Nippon Yusen said all of the ACX Crystal's 20-member Filipino crew members were safe.

The Fitzgerald is forward deployed to Yokosuka as part of the USS Ronald Reagan Strike Group. It took part in training near the Korean Peninsula last month involving ships from both the Reagan and USS Carl Vinson strike groups and the Japan Maritime Self-Defense Force.

The destroyer received $21 million in upgrades and repairs in February.