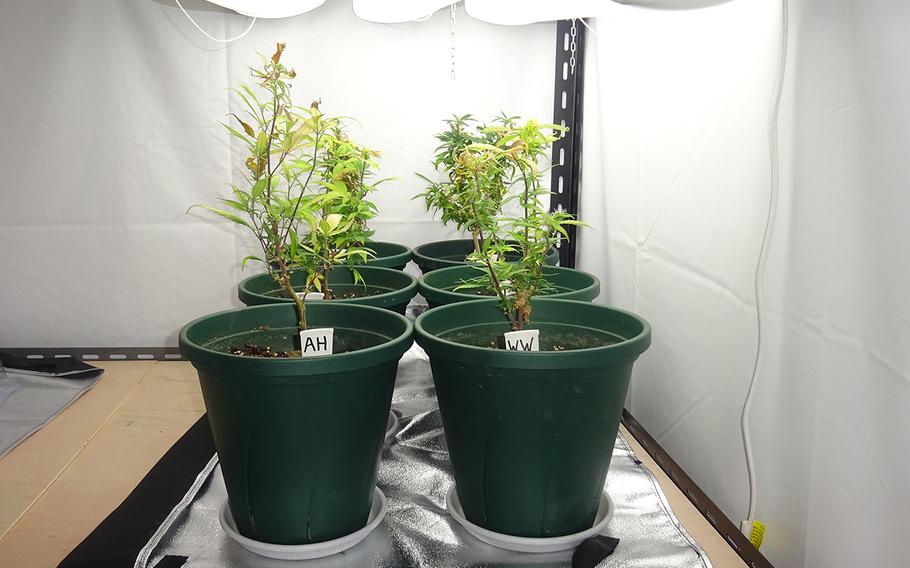 CAMP FOSTER, Okinawa — Three American workers at a U.S. Marine Corps base and one American teenager were charged with marijuana offenses this week on Okinawa after an extensive police operation.

Police declined to name the base or the individuals, who were arrested between August and October, because children are involved, but said charges were referred to the Naha District Public Prosecutors Office on Monday for violation of Japan’s Cannabis Control Act.

The American began growing marijuana at his home in February of this year and received marijuana by mail from Tokito on July 14 and 31, said Okinawa Police spokesman Ryuta Miyazato. The base worker sold marijuana to 13 customers at his home.

The American received about a quarter-pound of marijuana in the mail on each occasion in July, according to the Okinawa Times.

The father and son were arrested at their home Aug. 3, Miyazato said.

Police found about a half-pound of dried marijuana worth about $10,600 as well as six potted plants, the Okinawa Times reported without citing their source for the information.

The father and son are charged with violating the Cannabis Control Act, Miyazato said.

The father was charged with possession, possession with intent to profit, growing marijuana and violation of Japan’s Drug Exception Law, or knowingly and willingly handling an illegal drug, a spokesman for the Naha District Public Prosecutors Office said.

The spokesman declined to comment on what charges the teenager faces.

Two other unnamed male American base workers — a 30-year-old in Yomitan and a 39-year-old in Uruma — were arrested Aug. 30 and Oct. 23, respectively, after purchasing marijuana from the first American, Miyazato said. They have both been charged with possession.

Growing to import or export is punishable by up to seven years in prison, the websites said. The punishment for violating Japan’s Drug Exception Law is two years in prison and $3,000.

Twenty people have been arrested or had charges referred to prosecutors for their part in the ring, the Mainichi newspaper reported Tuesday. Three have reportedly denied the accusations.