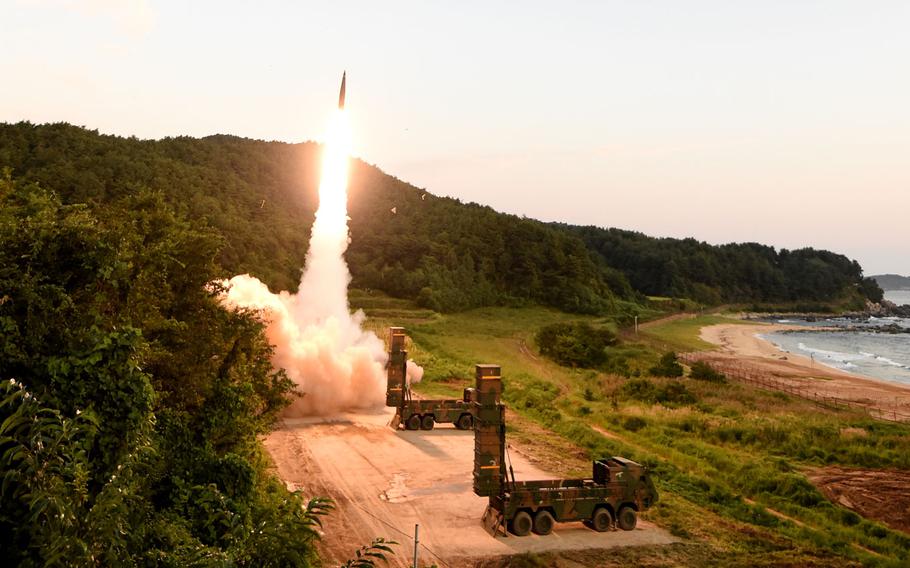 South Korea fires missiles into the sea off its east coast during a live-fire drill meant as a warning to North Korea after the communist state conducted its sixth nuclear test. (South Korea’s Joint Chiefs of Staff)

SEOUL, South Korea – It was a powerful warning to North Korea: U.S. supersonic bombers and stealth fighter jets flew over the divided peninsula and conducted precision strike drills in the South.

Three days later, the communist state carried out its sixth and most powerful nuclear test.

Defense Secretary Jim Mattis responded with a blunt warning that any threat to the United States or its allies “will be met with a massive military response – a response both effective and overwhelming.”

He didn’t elaborate, but the escalating crisis over the North’s nuclear weapons program has generated fears of outright war as more than a decade of economic sanctions and diplomatic pressure failed to curb the regime’s ambitions.

President Donald Trump’s hard line and increasingly bellicose rhetoric toward the North have heightened concerns that the countries could stumble into conflict, which U.S. military commanders have said would be “catastrophic” for all sides.

The usual U.S. response to Kim Jong Un’s saber rattling is to send bombers, fighter jets and warships to South Korea in a show of solidarity and military might. But analysts say Trump’s administration has several alternatives short of war if it decides to step up its military response.

“A kinetic response could signal Kim Jong Un and other potential adversaries … that the U.S. will not allow itself to be threatened,” said William McKinney, a visiting scholar at the U.S.-Korea Institute at Johns Hopkins University and a contributor to the 38 North website.

“Kinetic action that is reasonable, proportional and meaningful can achieve our objectives without erupting” into a second Korean War, he said. “It can be an ‘escalation to de-escalate.’”

The United States maintains about 28,500 servicemembers in South Korea and 50,000 in Japan along with major U.S. bases on the Pacific island territory of Guam.

Trump has given mixed signals about his plans for dealing with the North, which has made alarming progress in its march to develop a nuclear-tipped missile that could target the U.S. mainland.

He has warned he’s willing to act unilaterally, threatened to unleash “fire and fury” against the North and said the U.S. military was “locked and loaded,” adopting unusually bellicose rhetoric that aides said was an attempt to use language the North Koreans would understand.

When asked by a reporter if he would attack the North after Sunday’s nuclear test, Trump said “we’ll see.”

Meanwhile, Secretary of State Rex Tillerson has left the door open for talks with the North and pressed diplomatic options, including tightening economic sanctions and pressuring China and other countries to take measures to cut off Pyongyang’s foreign currency supply.

Thomas Spoehr, director of the Center for National Defense at the Washington-based Heritage Foundation, said the ambiguity may be by design.

Spoehr, a retired Army lieutenant general, said a North Korean missile strike that hits U.S., South Korean or Japanese territory would certainly lead to military action. But the picture becomes murky with other possible scenarios, including arming an ICBM with a nuclear warhead.

“No one exactly knows where the bar rests today to trigger U.S. military action,” he said in an email. “I think it’s useful for Kim Jong Un to wonder if the next loud crash he hears is either an auto accident or a Tomahawk cruise missile landing.”

He said the military could increase missions and joint exercises with Seoul and Tokyo near North Korean airspace. Other options include special operations raids and the interdiction of all ships sailing to and from North Korea to enforce U.N. sanctions.

The U.S. could also shoot down missiles launched in the future over any territory not controlled by North Korea, Spoehr said.

North Korea has thousands of artillery tubes and rocket launchers within range of Seoul, meaning even a conventional war would put millions of South Koreans, Americans and others in the line of fire.

For its part, the North Korean regime is known to be focused on its own survival, leading many to pin their hopes on the U.S. policy of deterrence.

Kim, the third ruler in the family dynasty that founded the country in 1948, has raised tensions before only to pull back from the brink as a way of increasing his leverage and wrangling concessions and aid from the West.

But the North’s rapid progress and defiant missile-testing program has prompted calls in South Korea for the deployment of aircraft carriers, nuclear submarines, nuclear-capable bombers and other strategic assets to the peninsula on a more regular basis.

President Moon Jae-in also reached agreement with Trump in a phone call Monday to remove the alliance-imposed limit on the size of warheads for South Korean missiles as he seeks to boost his country’s defenses.

Defense Minister Song Young-moo even raised the once-unthinkable possibility of bringing back U.S. tactical nuclear weapons to the South, during an appearance at the National Assembly on Monday, according to the Yonhap News Agency.

The U.S. brought the weapons to the South in the years following the 1950-53 Korean War but withdrew them in 1991 after the two Koreas agreed to denuclearize the peninsula.

Moon’s office rejected the idea of redeploying the warheads last week in response to opposition calls.

The defense ministry appeared to walk back Song’s remarks during a press conference Tuesday, saying it’s seeking “all available military options,” but “there’s no change in our government’s denuclearization principle.”

South Korea’s military, meanwhile, conducted a mock attack on the North’s nuclear-testing site by firing missiles into the sea off the country’s east coast on Monday. The navy also was holding live-fire drills this week in a bid to step up pressure against the North.

Moon, who ordered the toughest possible response after the nuclear test, took office on May 10 with hopes of renewing a long-stalled dialogue with the North only to see his efforts repeatedly rebuffed.

He has backed strengthening sanctions and is pressing for an oil embargo against the North and a ban on its exportation of foreign laborers, his office has said.

But the president, the son of North Korean refugees, vowed last month that his government will “do all it can to prevent another war from breaking out” and insisted that no military action can be taken on the peninsula without permission from the South.

The U.S. ambassador to the United Nations, Nikki Haley, also urged the Security Council to adopt the “strongest possible measures” after the nuclear test, saying the North Korean leader’s actions show “he is begging for war.”

“War is never something the United States wants. We don’t want it now,” she said. “But our country’s patience is not unlimited. We will defend our allies and our territory.”