Could tensions in South China Sea lead to armed confrontation? 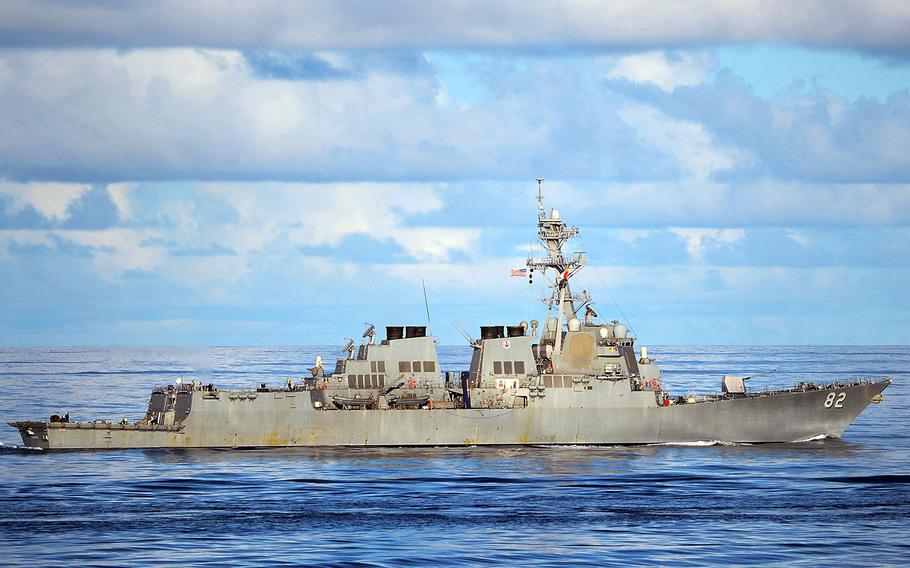 The guided-missile destroyer USS Lassen is shown in the Philippine Sea in 2013. China will likely ramp up efforts to expand and militarize disputed islands in the South China Sea as a result of the U.S. Navy’s more assertive patrols in the region, China experts say. The USS Lassen sailed within waters surrounding a reef claimed by China in a demonstration by the United States of freedom of navigation rights in the South China Sea, according to reports in late October, 2015. (Declan Barnes/U.S. Navy)

China will likely ramp up its efforts to expand and militarize disputed islands in the South China Sea — an area critical to the global economy — as a result of the U.S. Navy’s more assertive patrols in the region, China experts say.

And while many analysts applaud the Navy’s more robust approach with so-called “freedom of navigation” operations, there’s little agreement about whether such patrols will lead to armed confrontation in the South China Sea, where more than $1.2 trillion in U.S. trade passes annually.

Some believe the relationship between the two nations, whose economies are deeply entwined, has matured to the point that dialogue will defuse tensions and potential conflict.

“I think the most likely thing is that the two countries will look ahead and see that their interests and good relationship and other things are important and positive, which will keep it from reaching a crisis,” said Eric McVadon, a retired Navy admiral and senior adviser at the Institute for Foreign Policy Analysis, a nonpartisan think tank.

After a flurry of statements by Chinese officials condemning the USS Lassen's patrol near the Spatly Islands on Oct. 27, China’s military posted photos on its navy’s website of fighter jets training from an unidentified airstrip in the South China Sea.

Experts believe the jets took off from Woody Island in the Paracel Islands, near the coast of Vietnam, according to the South China Morning Post, a Hong Kong-based newspaper.

The fighter flights served as a warning that U.S. allies, such as Japan and Australia, should not conduct similar freedom of navigation operations — known as FONOPs — military expert Ni Lexiong told the Post. Australia is reportedly considering such patrols in the Spratly Islands, another South China Sea chain claimed by China and disputed by Vietnam, the Philippines, Taiwan and Malaysia. Brunei and Indonesia have had conflict over sea boundaries as well.

The U.S. will continue sailing through the region, U.S. Pacific Command chief Adm. Harry Harris said Tuesday during a visit to China, although he emphasized that Navy ships will avoid military confrontation. Reuters quoted an unidentified Defense Department source as saying ships will go within 12 nautical miles of disputed islands roughly eight times a year.

Some analysts view all this as expected turbulence in the superpowers’ relationship.

“Rhetorical condemnation aside, I think the reactions of both sides following the FONOPs shows just how stable the U.S.-China military relationship currently is,” said Jeffrey Becker, an analyst in the China Studies Division at CNA, a nonprofit research and analysis organization in Arlington, Va.

In the past, no one would have been surprised had China suspended military-to-military engagements with the U.S. on the spot, he said. “Yet on Thursday the two navies agreed to continue to maintain dialogue, which I think reflects just how far the military relationship has come.”

In fact, China had a ready-made opportunity for such retaliation during Harris’ visit to China, where he met with his counterpart and other military officials. Long in the works, the trip went ahead despite the recent tensions.

There also was no conflict two years ago when the U.S. flew B-52 bombers through China’s newly announced Air Defense Identification Zone over disputed islands in the East China Sea, said Zack Cooper, a fellow at the Washington, D.C.-based Center for Strategic and International Studies.

“I think there won’t be any significant change in the South China Sea,” he said.

However, some China experts expect a lot more tumult ahead — and possibly armed conflict.

China is in deep distress over a faltering economy, said Gordon G. Chang, author of the 2001 book, “The Coming Collapse of China.”

“This is a regime that for more than three decades based its legitimacy on the continued delivery of prosperity, and with the economy falling apart, the only remaining basis for legitimacy is nationalism,” he said. “And Chinese nationalism is causing friction in this arc of nations, from India in the south to South Korea in the north.”

Anyone who believes armed conflict can’t happen between China and the U.S. is “daft,” Chang said.

“Of course neither side wants an armed conflict, but that doesn’t mean there won’t be one,” he said. “All you have to do is look at history to see that there are many times that nations don’t want to go to war but they end up doing so.”

As a result of the recent tensions, China might “intensify its build-up on those fake islands,” said Mohan Malik, a professor at the Asia-Pacific Center for Security Studies in Honolulu, referring to China’s dredging of sea sand to create artificial islands. “This gives China the perfect pretext, if it was looking for one, not to slow down its construction or fortification of islands, but also to put the blame on the U.S. for making China do that.”

The new FONOP patrols also give the hawks within China’s People’s Liberation Army a chance to “up the ante,” he said. At a time when the Chinese economy has significantly slowed, the Communist Party leadership — particularly President Xi Jinping — does not want to appear weak domestically, and redoubling efforts in the South China Sea could be a demonstration of resolve, he said.

Navigational control over the South China Sea is a contest between the U.S. and China that will become contentious at times, said Patrick M. Cronin, senior director of the Asia-Pacific Security Program at the Center for a New American Security, a Washington, D.C.,-based think tank.

The Chinese will try to drive a wedge between the region and the United States, while the U.S. will hold up China’s “assertive unilateral behavior” as a wedge between China and its neighbors, he said.

Malik agreed, saying Beijing’s goal is to bring about a decisive shift in the regional balance of power. China is attempting to convince neighboring countries that the balance of power has already shifted its way and that their interests lie in cutting bilateral deals — on China’s terms.

China will attempt to frustrate American efforts in the South China Sea with pressure in multiple forms, “from diplomacy and public messaging to assertive activities on land and on and over the sea,” Andrew S. Erickson, an associate professor at the U.S. Naval War College’s China Maritime Studies Institute, wrote in an essay published Friday on chinafile.com.

“China may accelerate fortification of the features it occupies – likely a long-held objective in search of a justification,” Erickson wrote. “This would be a counter-productive policy, since it would drive the wedge deeper between China and its neighbors.”