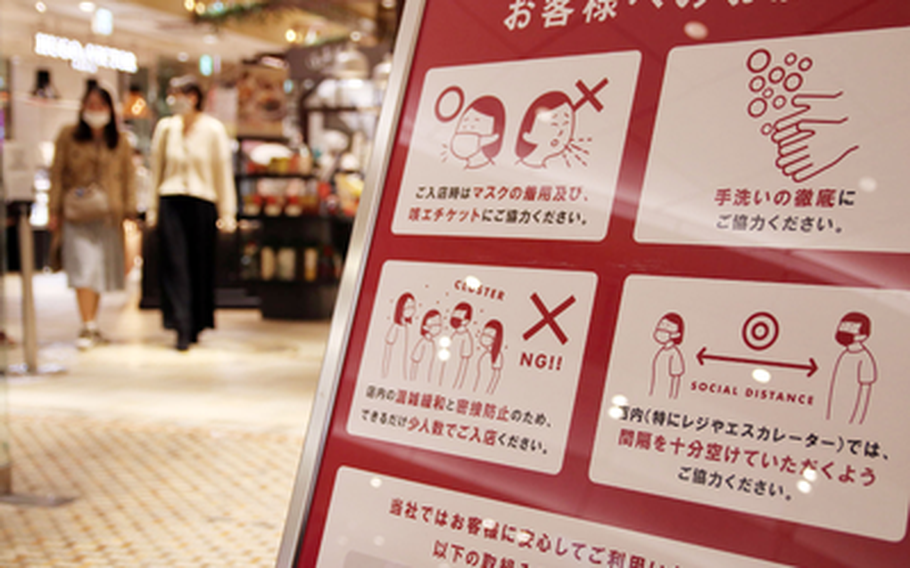 Buy Photo
A sign at a shopping area in central Tokyo reminds patrons to wear a mask, wash their hands and follow other anti-coronavirus measures, Tuesday, Nov. 17, 2020. (Akifumi Ishikawa/Stars and Stripes)

TOKYO — A coronavirus surge in South Korea and Japan has pushed the number of new infections in those countries to heights not seen since August.

In South Korea, public health authorities reported 313 new cases Wednesday, the largest daily increase in that country since 441 cases on Aug. 27, according to the Korean Disease Control and Prevention Agency and World Health Organization. South Korea has reported 29,311 infections and 496 deaths during the pandemic so far.

U.S. Forces Korea earlier this week announced 12 new patients among individuals who arrived from the United States between Oct. 29 and Nov. 12. U.S. bases in Japan reported 17 new cases late Tuesday and Wednesday, including 14 at the headquarters in western Tokyo of U.S. Forces Japan.

Japan is experiencing a coronavirus spike that began Nov. 3 with 468 new cases and rose to 1,694 on Sunday, just shy of the pandemic peak of 1,998 on Aug. 3, according to data from the World Health Organization. Japan recorded 1,190 new patients on Tuesday for a pandemic total of 119,326 cases and 1,903 deaths.

Yokota Air Base in western Tokyo recorded its highest one-day total, 14 new cases, including one at the base high school, on Wednesday, according to a base Facebook post and a letter from the school principal to staff and families.

All 14 were already in quarantine as the close contacts of a person who previously tested positive, according to an email Wednesday from a base spokesman, Air Force 1st Lt. Stuart Thrift. Yokota on Tuesday reported six individuals had tested positive over the previous three days.

The base on Wednesday evening tightened limits on social gatherings to no more than six people or two families; promised administrative action, up to barring individuals from the base, for traveling through prohibited areas, including central Tokyo, outside of work without authorization; and imposed approval by a colonel or above for government-funded travel within Japan.

The air base attributed the spike to “aggressive contact tracing and notification procedures." Yokota does not plan to lock down the base "at this time," according to the Facebook post.

“Our Public Health team is still aggressively performing contact tracing and notification procedures to identify all close contacts of the COVID positive individuals,” according to Thrift's email, referring to COVID-19, the respiratory disease caused by the coronavirus.

So far this month, Yokota has announced 24 new infections, more than all the cases reported within the base population in all previous months of the pandemic combined. It previously reported a monthly high of 10 cases in August. The base now has 19 active cases, according to the Facebook post.

Misawa Air Base in northern Japan also reported two new coronavirus cases late Tuesday; both tested positive while in isolation. One is the spouse of a woman who tested positive last week after the couple returned on a commercial flight to Japan. The second individual also tested positive after arriving from the U.S. aboard a government-contracted flight, according to a base Facebook post. Misawa has five active cases.

Far to the south on Okinawa, Kadena Air Base recorded one new coronavirus case on Wednesday, apparently a locally acquired infection, according to a base Facebook post. The patient started experiencing symptoms and self-isolated on Sunday.

Public health officials identified eight close contacts of that individual and sent them all into quarantine, according to the base.

“There is no other known exposure to the base community at this time," the post said.

Any new arrivals or returning travelers associated with U.S. forces in Japan and South Korea must spend a minimum two weeks in isolation and be tested at least twice for the coronavirus. U.S. military authorities in Japan typically do not specify whether their new cases are service members, civilian employees or family members.

Okinawa prefecture on Wednesday reported 41 new coronavirus cases and one death on Wednesday, a public health official told Stars and Stripes by phone. Okinawa, where the bulk of U.S. military personnel are stationed, has reported a pandemic total of 3,833 cases and 67 deaths.

In South Korea, government health officials on Wednesday called on people to cancel or postpone all gatherings for the next two weeks and refrain from having meals, meetings and even conversations without wearing masks.

On Sunday, U.S. Forces Korea reported seven service members tested positive after arriving at Osan Air Base aboard the Patriot Express, a government-contracted passenger flight from the U.S., on Oct. 29 and Nov. 2, 3, 8, 11 and 12.

Four service members and a civilian contractor tested positive after arriving on commercial flights at Incheon International Airport on Nov. 6, 8, 9, 10 and 12, according to USFK.

Eight individuals were positive on their first tests; four tested positive on subsequent tests while in quarantine. All are quarantined at Camp Humphreys or Osan Air Base, according to USFK.