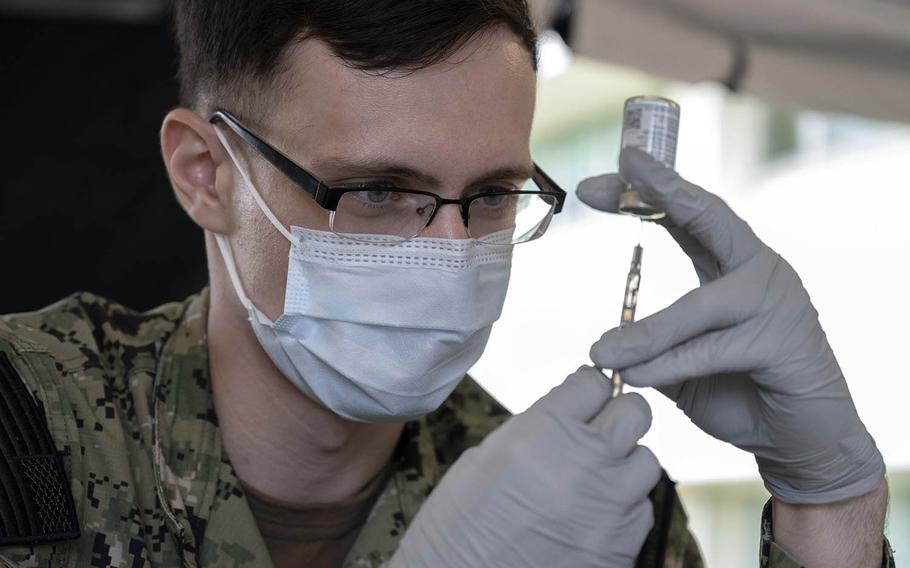 TOKYO — The Marine Corps and Air Force ordered an indefinite end Monday to indoor dining at off-base restaurants on Okinawa, citing an increase in coronavirus cases on the island and at their respective installations.

Since March 5, the Marines have seen “a steady rise in COVID-19 cases both on and off-base,” Marine Corps Installations Pacific announced in a Facebook post. “Due to this result, the [health protection condition] measures were re-evaluated and changed for the health and safety of everyone on island.”

Okinawa prefecture reported 66 new infections Saturday, the peak of a steady rise that began with seven on Feb. 21, according to the prefecture’s data. In between, case numbers rose through the low teens to 28 on March 4 and into the 30s by mid-month. The winter surge on the island peaked at 131 new patients on Jan. 27.

The Okinawa Marines on March 5 lifted a ban on indoor dining, with limits on group size and table spacing. They last publicly reported one new COVID-19 patient on March 10.

However, U.S. Forces Japan on its website listed 13 active coronavirus patients within the Marine Corps on Okinawa as of Thursday — 11 at Camp Foster and two at Camp Hansen.

“In the past week we have seen an increase in COVID cases on Okinawa, in both the local population and in the joint-service community,” a spokesman for III Marine Expeditionary Force, Capt. Pawel Puczko, wrote Monday by email to Stars and Stripes.

He said most service members and eligible civilians offered the COVID-19 vaccine are choosing to receive it. III MEF is in phase 1c of the Defense Department priority table, which includes DOD beneficiaries ages 65 to 74 and those ages 16 to 64 with increased risk for severe illness if they contract the virus.

At Kadena Air Base on Okinawa, 18th Wing commander Brig. Gen. Joel Carey also ordered an end to off-base indoor dining “and physically waiting inside a restaurant for carryout/takeout,” not including waiting in malls and food courts. Kadena had lifted that prohibition March 4.

Carey’s order Monday cites rising infection numbers on and off base. Kadena has reported 11 cases so far in March, including four new coronavirus patients Sunday.

Three developed COVID-19 symptoms and isolated themselves before testing positive, according to a base Facebook post. The fourth tested positive after contact with a previously infected person.

No other U.S. bases in Japan reported new coronavirus patients between 6 p.m. Friday and 6 p.m. Monday.

U.S. Forces Korea reported five new infections going back to March 8, all but one of them new arrivals to the peninsula.

Of the four new arrivals, three flew into Osan Air Base aboard the Patriot Express, a government-chartered air service, between March 8 and 15, according to a USFK news release. The fourth arrived at Incheon International Airport on a commercial flight March 15.