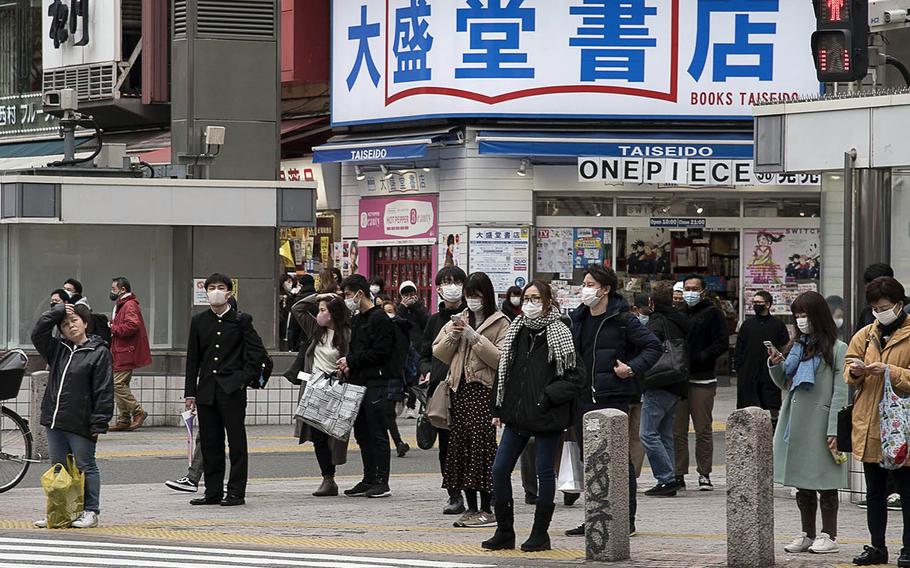 One woman is the exception among a group of pedestrians in central Tokyo wearing masks as protection against the coronavirus, Feb. 26, 2021. (Akifumi Ishikawa/Stars and Stripes)

TOKYO – The U.S. military in Asia reported three new COVID-19 cases as of 6 p.m. Tuesday as the coronavirus respiratory disease continued to generate hundreds of new patients in Japan and South Korea.

Another 300 people in Tokyo tested positive, the highest Tuesday total since 350 on Feb. 16, according to public broadcaster NHK and metro government data. The seven-day moving average on Tuesday, 289, is up more than 110% over the previous week, NHK reported.

Tuesday’s one-day total is the highest since the city reported 335 on March 11, according to metro data. In Tokyo 115,884 people have contracted the virus during the pandemic thus far. Nearly 1,600 people have died.

Japan reported 1,033 new patients on Tuesday, according to the World Health Organization.

In western Tokyo, two people at Yokota Air Base, the headquarters for U.S. Forces Japan, tested positive for COVID-19 between Saturday and Tuesday, according to a Facebook post.

Both patients were already in quarantine as close contacts of a previously infected person, according to the base. Medical authorities there are monitoring four coronavirus patients.

Yokosuka Naval Base, homeport of the U.S. 7th Fleet south of Tokyo, has reported one new coronavirus patient since Friday. That person tested positive after falling ill with COVID-19 symptoms, according to a base Facebook post Tuesday. The naval hospital there is monitoring five patients.

The Korea Disease Control and Prevention Agency reported another 363 new patients throughout the country Monday, with 75 in Seoul and 146 in Gyeonggi province, where Humphreys and Osan Air Base are located.

The South Korean military reported three new cases Tuesday for a pandemic total of 625, according to a media briefing by defense ministry spokesman Seung-chan Boo.