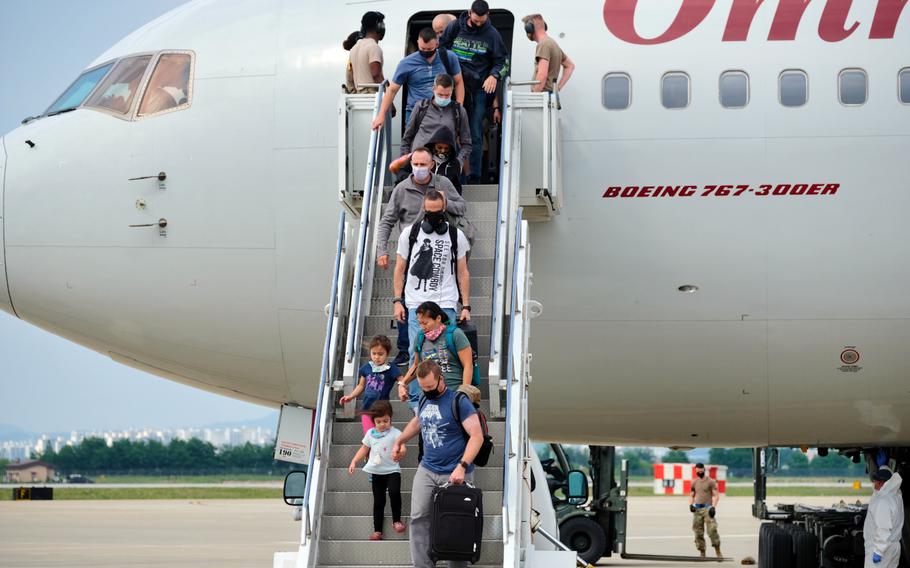 CAMP HUMPHREYS, South Korea — Nine people with U.S. Forces Korea tested positive for the coronavirus after traveling to South Korea from the United States, pushing the total number of confirmed cases in isolation to 21, the military said Friday.

Concern about a spillover effect has prompted USFK to follow the South Korean government’s lead in requiring coronavirus tests for all passengers from abroad upon arrival and before they are allowed to exit a mandatory two-week quarantine.

Seven of the service members tested positive after arriving on two separate government-chartered flights known as the Patriot Express, which land at Osan Air Base, USFK said in a statement.

Another service member, who was returning to USFK, and a civilian employee were confirmed to have the respiratory virus after arriving at Incheon International Airport on separate commercial flights, it added.

“All nine individuals … have since been moved to an isolation facility designated for confirmed COVID-19 cases on Camp Humphreys or Osan Air Base,” according to the press release.

Health authorities determined limited contact tracing was needed since all passengers on the flights had to be tested and quarantined. The quarantine rooms occupied before the patients were transferred to the isolation unit were thoroughly cleaned, USFK said.

The command did not immediately provide dates for the flights or other details. However, it said 900 random tests conducted among U.S. formations on the divided peninsula since the end of May had seen “zero positive” results.

In all, USFK has reported 63 coronavirus cases among troops, military dependents, contractors and other U.S. and South Korean civilian employees. Only 24 of those were contracted locally, with the most recent on April 14.

“Despite the confirmed cases, USFK remains at a high level of readiness with only 21 active duty service members who are currently confirmed positive for COVID-19,” the press release said.

South Korea has largely flattened the number of new cases daily, although it continues to suffer from cluster outbreaks and imported infections. Meanwhile, the virus continues to surge in the United States.