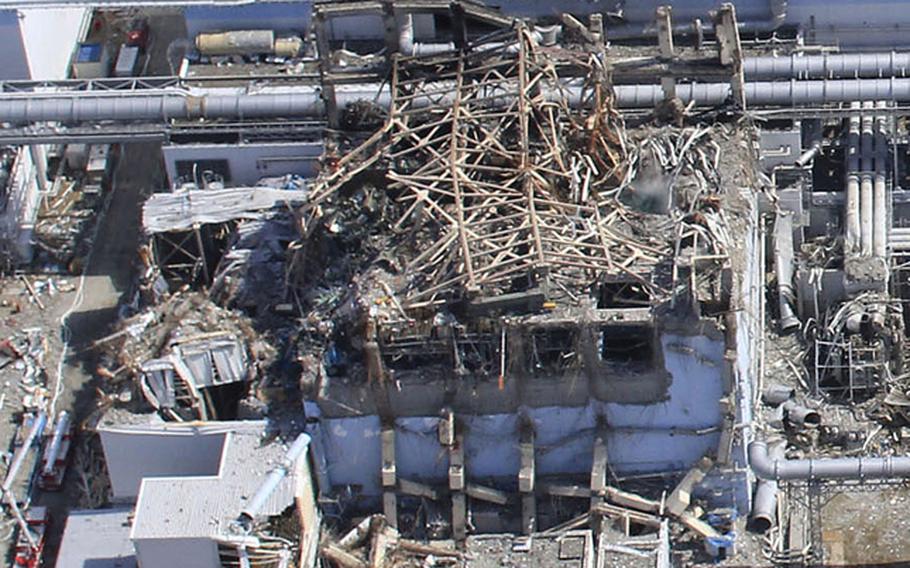 Two weeks later, Kan received a document that projected possible dire consequences for the four reactors damaged as a result of the magnitude 9.0 earthquake and tsunami, according to a recent investigative report by the Rebuild Japan Initiative Foundation, an independent think tank founded to probe the causes of the plant disaster. Among the risks was a loss of cooling water in Unit 4, which houses most of the plant&rsquo;s spent fuel that is not in secure dry casks. The fuel, if left exposed, would superheat and melt, releasing a massive amount of radiation.

The &ldquo;worst&rdquo; didn&rsquo;t transpire then, but a growing chorus of activists, experts and politicians is now raising alarm about the durability of Unit 4&rsquo;s cooling pool in the event of another strong earthquake.

Tokyo Electric Power Co., which operates the plant, has stated on its website that the holding pool in Unit 4 is sound and that the building could withstand an earthquake the magnitude of the March 11, 2011, quake. But that hasn&rsquo;t quelled calls for greater efforts to empty and secure Unit 4.

In April, U.S. Sen. Ron Wyden, D-Ore. &mdash; a member of the Senate Committee on Energy and Natural Resources &mdash; visited the plant. He told MSNBC during an April 17 interview that he asked to inspect it because there wasn&rsquo;t enough information getting out to the public about the cleanup.

&ldquo;I do think this is something that has to be addressed quickly,&rdquo; he told MSNBC. &ldquo;The utility company, called Tepco, has a 10-year plan for essentially moving the spent fuel rods to dry casks, dry storage. That, in my view, must be sped up because if another earthquake or tsunami hits, it could be very, very damaging and possibly more radiation than earlier.&rdquo;

In letters to Gregory Jaczko, chairman of the U.S. Nuclear Regulatory Commission; Secretary of State Hillary Clinton; and Energy Secretary Steven Chu, Wyden asked them to identify any support that could be offered to the Japanese to secure the plant&rsquo;s spent fuel.

On the heels of Wyden&rsquo;s visit, 72 Japan-based organizations sent a petition to U.N. Secretary-General Ban Ki-moon requesting international help. The petition asks the U.N. to organize a summit to consider the future of Unit 4 and to establish an independent team to coordinate international assistance.

The petition was endorsed by several former Japanese diplomats and nuclear energy experts.

&ldquo;We&rsquo;re not saying that it&rsquo;s going to collapse at this very moment,&rdquo; said Aileen Mioko Smith, executive director of the Kyoto-based group Green Action, one of the signatories. &ldquo;We&rsquo;re just very concerned that with enough earthquake motion that pool will collapse.&rdquo;

Ikko Nakatsuka, senior vice minister of reconstruction, said he is considering the call for international assistance.

&ldquo;I want to gather knowledge from around the world, and I&rsquo;m not rejecting international cooperation,&rdquo; he said during a press conference Monday at the Foreign Correspondents Club in Tokyo.

Nakatsuka, who recently toured the plant, presented an &ldquo;integrity evaluation&rdquo; for Unit 4. It concluded that there is no leakage or damage around the spent fuel pool, that the building is not tilted, and that testing had determined the building could withstand aftershocks as strong as the initial magnitude 9.0 quake. A support structure has also been built at the bottom of the pool, which increased the earthquake safety margin by 20 percent, the evaluation said.

Tepco was, in essence, nationalized this month after the government injected billions of dollars to keep it afloat. Public trust in the company&rsquo;s pronouncements, however, remains low more than a year after its mishandling of the disaster.

Yoichi Funabashi, chairman of the Rebuild Japan Initiative Foundation, wrote in the March edition of the Bulletin of the Atomic Scientists that &ldquo;the government and [Tepco] were astonishingly unprepared, at almost all levels, for the complex nuclear disaster that started with an earthquake and a tsunami.&rdquo;

&ldquo;Tepco bears the primary responsibility for the incompetent handling of the aftermath of the disaster.&rdquo;

Robert Alvarez, a former policy adviser to the U.S. secretary of energy and now a scholar at the Institute for Policy Studies, endorsed the U.N. petition.

&ldquo;The U.S. should be doing more to provide technical and materiel assistance, especially helping to provide more dry casks,&rdquo; Alvarez wrote in an email interview. &ldquo;The U.S. Energy department has a considerable amount of experience for the past 20+ years and has been spending $6 billion/yr to stabilize and remediate the huge mess left behind from the nuclear arms race at dozens of sites in the U.S.&rdquo;

Alvarez said he&rsquo;s not suggesting a &ldquo;hurry-up approach&rdquo; in securing the spent fuel in Unit 4. He advocates putting as much of the spent fuel as possible into dry, hardened storage casks &ndash; an &ldquo;unprecedented&rdquo; challenge given the existing damage to the building.

He estimates it would take several years and about 244 casks at roughly $1 million apiece to secure the 1,535 fuel assemblies.