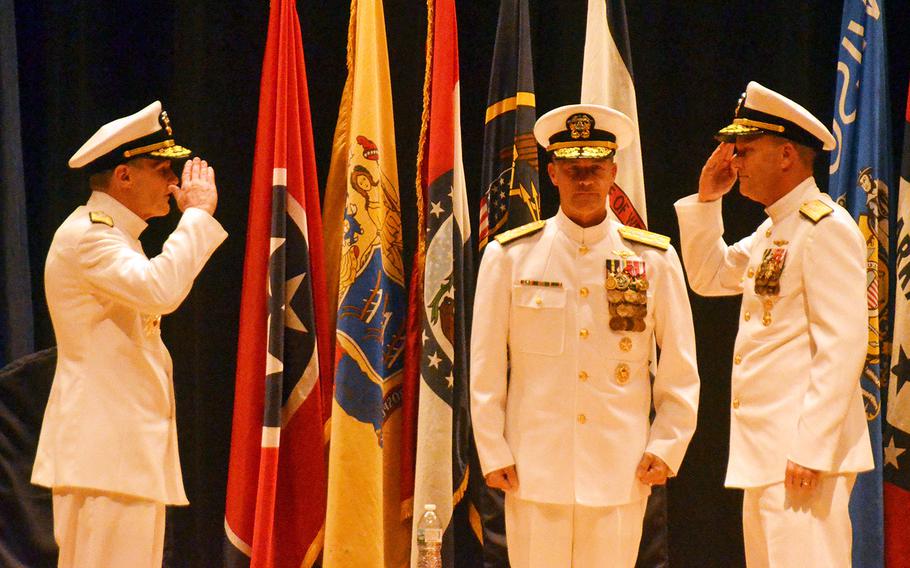 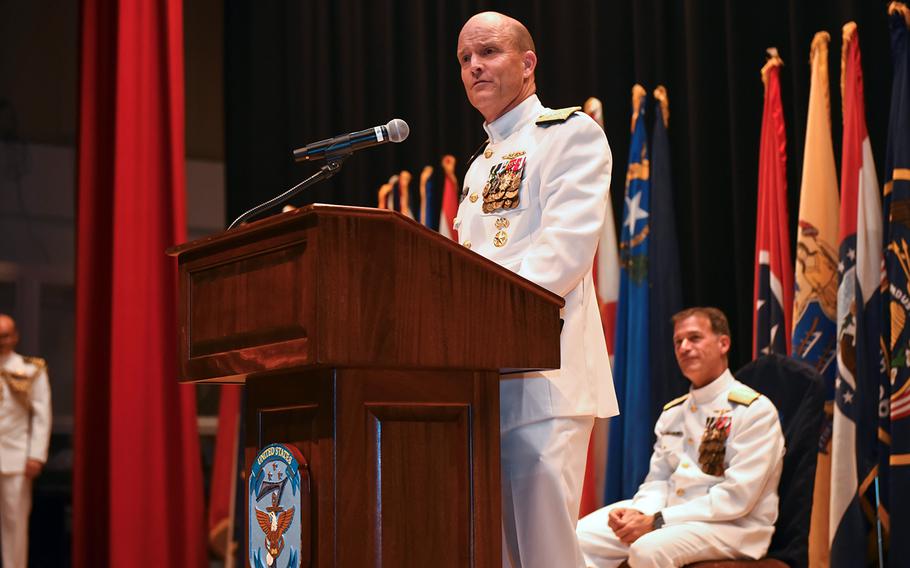 Sawyer, who passed command to Vice. Adm. Bill Merz, a fellow submariner with experience in Japan, had guided the fleet since August 2017 in the aftermath of two separate collisions involving U.S. warships and commercial vessels that killed 17 sailors.

The collisions in summer 2017 involving the USS Fitzgerald and the USS John S. McCain, both guided-missile destroyers, resulted in the ouster of Sawyer’s predecessor, Vice Adm. Joseph Aucoin. They also sparked a Navy effort to prevent future incidents by implementing about 100 changes such as tightening surface warfare officer qualifications and improving watch standing.

After the tragedies, “2018 was a rebuilding year and we made many changes,” Sawyer said. “It was really hard work, but we entered 2019 fully prepared.”

“There’s no question 7th Fleet is in a better place today than it was when you started,” he told Sawyer during the ceremony at Yokosuka’s Fleet Theater.

Although Aquilino didn’t elaborate, the “number one” adversary in the Pacific recently is China, whose bid to increase its sphere of influence has also put the 7th Fleet to work.

U.S. warships periodically conduct freedom-of-navigation operations in areas of the South and East China Seas claimed by several nations, including, and in some cases occupied by, China. U.S. vessels, including a Coast Guard cutter assigned to the 7th Fleet, have also steamed through the Taiwan Strait, a demonstration that consistently draws protests from Beijing.

The 7th Fleet also partners with allied and friendly Indo-Pacific nations on military, coast guard and humanitarian-aid exercises to bolster support for the U.S. presence in the region. The U.S. maintains mutual defense treaties with five allies in the region: the Philippines, Australia, South Korea, Japan and Thailand, according to the 7th fleet website.

The 7th Fleet, according to its website, is the largest of the U.S. numbered naval fleets. It includes between 70-80 ships, including the permanently deployed aircraft carrier USS Ronald Reagan, its air wing and carrier strike group based at Yokosuka; 140 aircraft and 40,000 sailors and Marines, according to the website.

That force includes an amphibious ready group based at Sasebo Naval Base on Kyushu, the southernmost main island of Japan.

Its area of operations encompasses 48 million square miles of the Pacific and Indian Oceans, from the International Date Line to the India/Pakistan border and from the Kuril Islands in the north to the Antarctic in the south.

Merz, a graduate of the U.S. Naval Academy and a native of San Diego, comes to the 7th Fleet from the Pentagon, where he served as deputy chief of naval operations for warfare systems, according to his official biography. Previously, he commanded the nuclear-powered deep-sea vessel Submarine NR-1 and the attack submarine USS Memphis as well as Submarine Development Squadron 12, the Naval Mine and Anti-Submarine Warfare Command and Task Force 77 in San Diego.