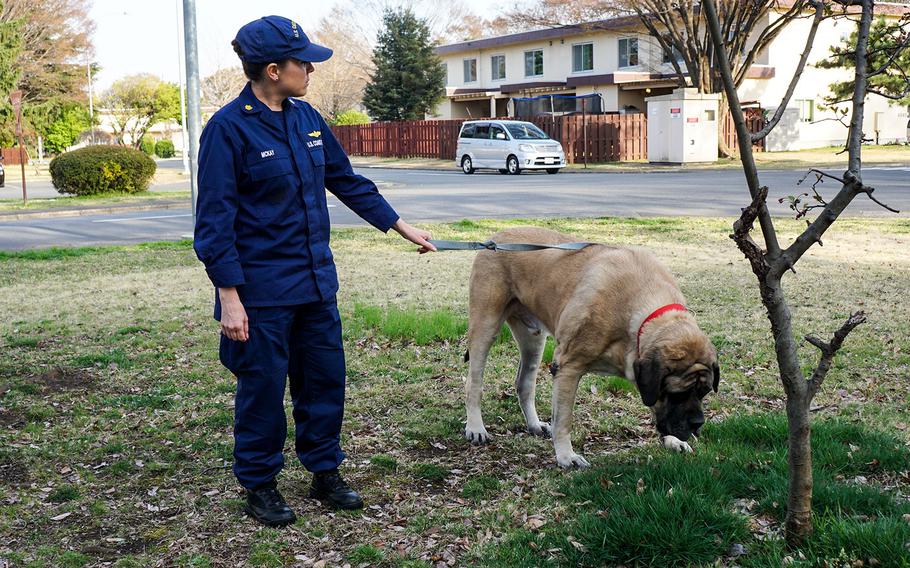 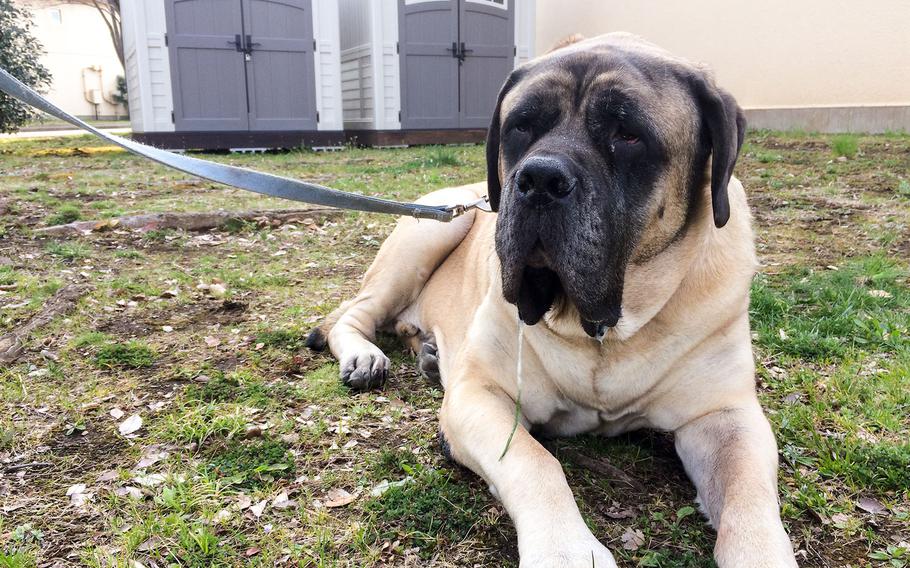 The owner of a 221-pound English mastiff is hoping to avoid a hefty price tag for shipping her dog back to the United States from Japan. (Allen Onstott/Stars and Stripes)

YOKOTA AIR BASE, Japan — The owner of a 221-pound English mastiff may have to pay $31,000 to fly the dog back to the United States after United Airlines’ recent decision to suspend its pet travel program.

McKay assumed she would be able to bring George home the same way at the end of her assignment; however, United suspended its pet transportation service last week after three dogs were sent to incorrect destinations — including one dog that was sent to Japan instead of Kansas. A fourth dog died after its owner placed it in an overhead bin during a flight from Houston to New York.

In a statement on its website, United said the service pause will allow a systematic review of pet shipments that is expected to be completed by May 1.

“I am a single-parent servicemember just trying to get home to the U.S. with my dog and my son,” said McKay, who’s headed for a new assignment in Washington, D.C., in June, but wants to fly to Texas to pick up a car she stored there. “The alternative options to do this are financially unreasonable — but my dog is my family and I won’t leave him behind.”

The suspension has also stranded military-owned pets on Guam, as United was the only airline operating in the U.S. territory that permitted pet transport to and from the mainland.

Other options exist for shipping pets from Japan — but when it comes to large animals they can be expensive and inconvenient. Only United and All Nippon Airways offer direct flights from Tokyo to Houston, McKay said.

“[ANA] said they could carry him, but his carrier was too big and would take up more than one pallet space, so they’d have to charge extra,” she said.

ANA’s fee for transporting George would be about $31,000 — nearly 10 times more than it cost to bring him to Japan, she said.

An Air Mobility Command flight — the usual way for military pet owners to transport their animals to and from Japan — isn’t an option. The command sets a maximum weight of 150 pounds, including the pet’s carrier, and only travels to Seattle.

Several Asian, Mideast and European carriers could transport George, but only with multiple transfers and long flight times that McKay said she can’t consider.

McKay holds out hope that she can ship George with United after pet travel resumes.

“This isn’t just me and my pet. There are other servicemembers and [Department of Defense] civilians in the same boat,” she said. “I need to find a solution that benefits everyone.”