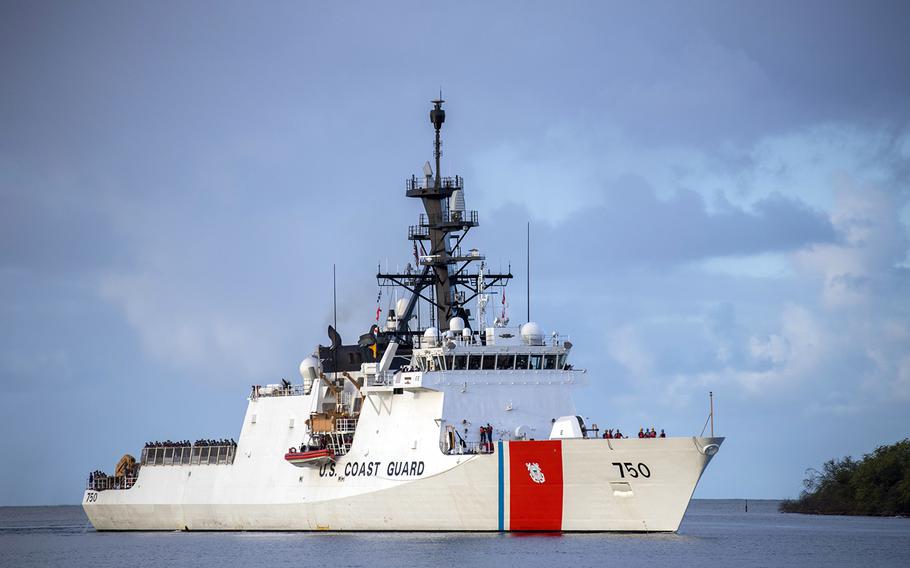 The U.S. Coast Guard cutter Bertholf stopped Sunday in Hong Kong harbor for a port visit just weeks after irking China with a passage through the Taiwan Strait.

The Coast Guard last sent a cutter to Hong Kong, a territory of China, 17 years ago, according to a Monday statement from the service. The Alameda, Calif.-based Bertholf’s crew “will have opportunities to explore Hong Kong and interact with local citizens through community relations projects and tours,” it said.

Hong Kong is 335 nautical miles southwest of the Taiwan Strait, which the Bertholf sailed through with the Navy guided-missile destroyer USS Curtis Wilbur March 24-25. That passage marked the fifth time in six months that U.S. ships transited the strait.

Beijing protested the Bertholf and Curtis Wilbur’s passage through the 110-mile-wide strait, which separates mainland China from Taiwan. Beijing urged the United States to respect the “One China” principal — China’s view that it has sovereignty over Taiwan — China’s Ministry of Foreign Affairs spokesman Geng Shuang said at a press conference March 25.

The U.S. acknowledges Beijing’s view that it has sovereignty over Taiwan but considers Taiwan’s status unsettled.

“China has paid close attention to and monitored from start to end the passage of the U.S. military vessels through the Taiwan Strait,” Geng said, according to a transcript of the press conference. “We urge the U.S. to strictly abide by the one-China principle … prudently and properly handle Taiwan-related issues and avoid damaging China-U.S. relations and cross-straits’ peace and stability.”

Coast Guard Pacific Area commander Vice Adm. Linda Fagan said in the Monday statement that the U.S. has “a strong commitment to a free and open Indo-Pacific, governed by a rules-based international system that promotes peace, security, prosperity and sovereignty of all nations.”

The Bertholf’s commander, Capt. John Driscoll, said he looked forward to the cultural experience the port call would offer.

“My last visit to Hong Kong was aboard a Coast Guard cutter 20 years ago, and this amazing city has always remained my favorite port of call,” he said in the statement. “I’m excited the officers and crew of Bertholf will have a similar opportunity to enjoy the culture, meet people and take home the same memories that I’ve enjoyed my entire career.”

The Coast Guard did not say how long the Bertholf would stay in the city.