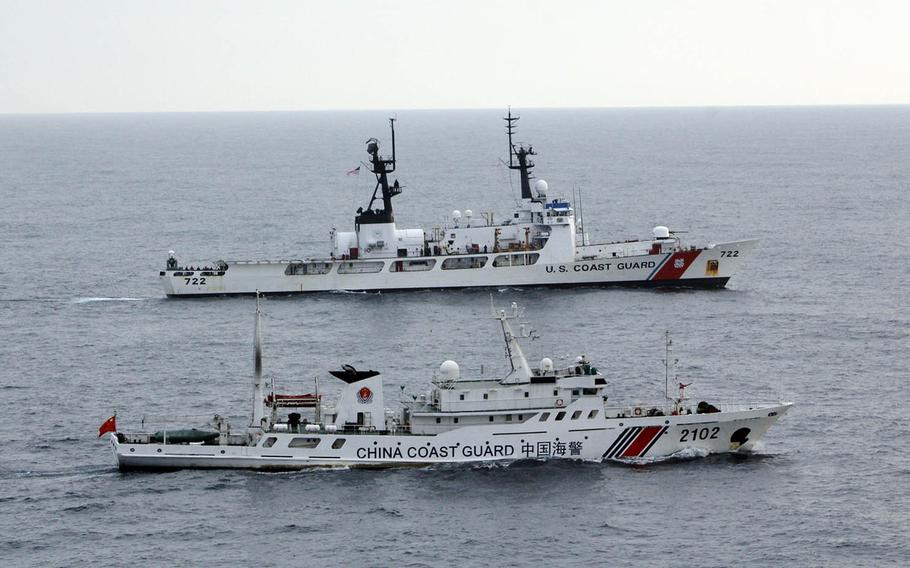 Vessels from the U.S. and Chinese coast guards sail alongside each other somewhere in the northern Pacific Ocean in 2014. (U.S. Coast Guard)

The China Coast Guard would be allowed to use weapons against foreign ships in its waters under a proposed revision to its maritime police law, according to a translated version of the document.

China’s National People’s Congress last month drafted the revised law, which has yet to be enacted, according to a Wednesday report by the Chinese legislation blog NPC Observer.

The coast guard would be authorized to use weapons “in the case of unlawful infringement by a national organization or individual,” according to the translated draft. It also OKs “all necessary measures to stop the infringement and eliminate the danger on the spot.”

China routinely accuses the United States of infringing on its sovereignty by sending naval vessels through contested waters. Those freedom-of-navigation operations challenge Chinese claims in the South China Sea that are unrecognized by international law.

The Navy regularly sends its vessels within 12 nautical miles of the Spratly and Paracel islands, areas China claims as territorial waters, but the U.S. considers open to international passage.

The draft law does not specify what kinds of weapons the coast guard would use, but the typical Type 218 Chinese patrol boat carries twin 14.5 mm machine guns, according to a Jan. 9 report by the International Business Times.

The proposed legislation comes as the China Coast Guard this week broke its record for the number of days spent in one calendar year near the Senkaku Islands, which Japan controls but are also claimed by China and Taiwan. As of Tuesday, the Chinese coast guard this year has spent 284 days in the waters surrounding the handful of rocky islets, Chief Cabinet Secretary Katsunobu Kato told reporters Monday.

At a press conference Thursday, Kato said he was aware of the Chinese legislation but declined to comment. However, he said, the Japanese government will continue to “firmly and calmly respond to Chinese vessels.”

“Under our policy to adamantly defend our territory, lives and property of the Japanese citizens including the Japanese fishing vessels, we will take all possible measures and monitor the situation around Senkaku Islands and gather information by coordinating with related ministries,” Kato said.

The United States has said the U.S.-Japan Treaty of Mutual Cooperation and Security, which requires the U.S. to defend Japan, applies to the uninhabited Senkakus.

The proposal also comes after national security adviser Robert O’Brien announced last month that the U.S. Coast Guard is strategically homeporting its newest fast-response cutters in the Western Pacific. Guam received its first of such cutters in September and are awaiting two more.

The Chinese congress is accepting public comments on the draft law until Dec. 3, after which it will be up for further deliberation, according to the NPC Observer.