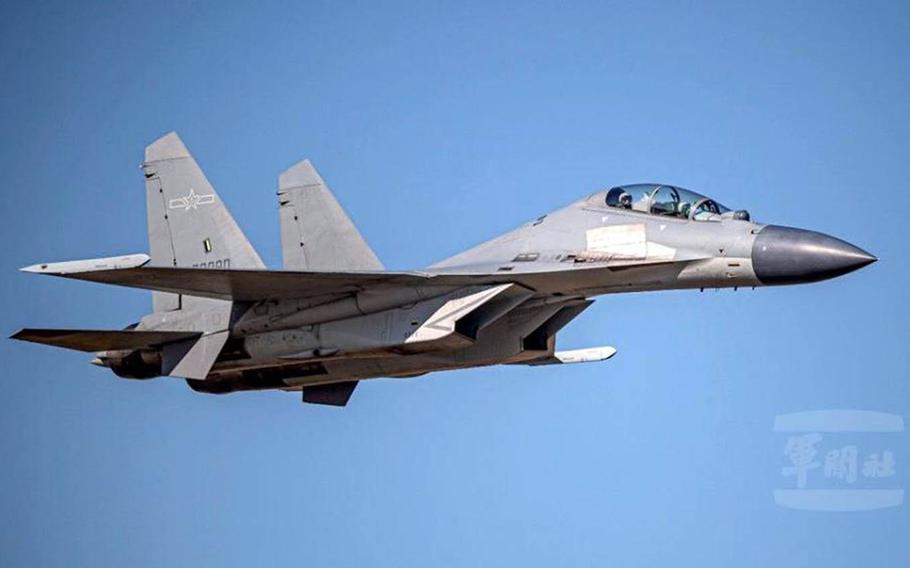 The Chinese Shenyang J-16 fighter flies near Taiwan in this undated photo provided by the island's defense ministry. (Taiwan Ministry of National Defense)

Chinese warplanes flew into Taiwan’s air defense identification zone two days in a row over the weekend, stepping up its show of force a day after President Joe Biden’s administration signaled support for the self-governing island.

The aircraft traveled southeast, away from the Chinese mainland, before turning around and flying along virtually the same flight path, according to maps released online by Taiwan’s air force.

In both instances, Taiwan dispatched airborne alert aircraft, issued radio warnings and deployed air defense missile systems for tracking and surveillance, according to the Taiwan Ministry of National Defense.

China carries out near daily flights into Taiwan’s air defense identification zone, but not usually of the size and scope seen over the weekend, the English-language news website Taiwan News reported Sunday.

China considers Taiwan, which is less than 100 miles off its eastern coast, to be a part of its territory.

On Saturday, the Biden administration weighed in with a statement from the U.S. State Department.

“Our commitment to Taiwan is rock-solid and contributes to the maintenance of peace and stability across the Taiwan Strait and within the region,” State Department spokesman Ned Price wrote on the department’s website. “We urge Beijing to cease its military, diplomatic, and economic pressure against Taiwan and instead engage in meaningful dialogue with Taiwan’s democratically elected representatives.”

Price vowed to stand with Taiwan and to even deepen ties.

“We will continue to assist Taiwan in maintaining a sufficient self-defense capability,” he said.

Taiwan’s Ministry of Foreign Affairs Sunday thanked Price for his statements via Twitter.

“We’re committed to our partnership” with the United States, the ministry account said.