The Chinese destroyer Taiyuan anchors at Yokosuka Port, less than a mile from Yokosuka Naval Base, Japan, Thursday, Oct. 10, 2019. The ship will participate in Japan's international fleet review. (Christian Lopez/Stars and Stripes)

The Chinese destroyer Taiyuan anchors at Yokosuka Port, less than a mile from Yokosuka Naval Base, Japan, Thursday, Oct. 10, 2019. The ship will participate in Japan's international fleet review. (Christian Lopez/Stars and Stripes) 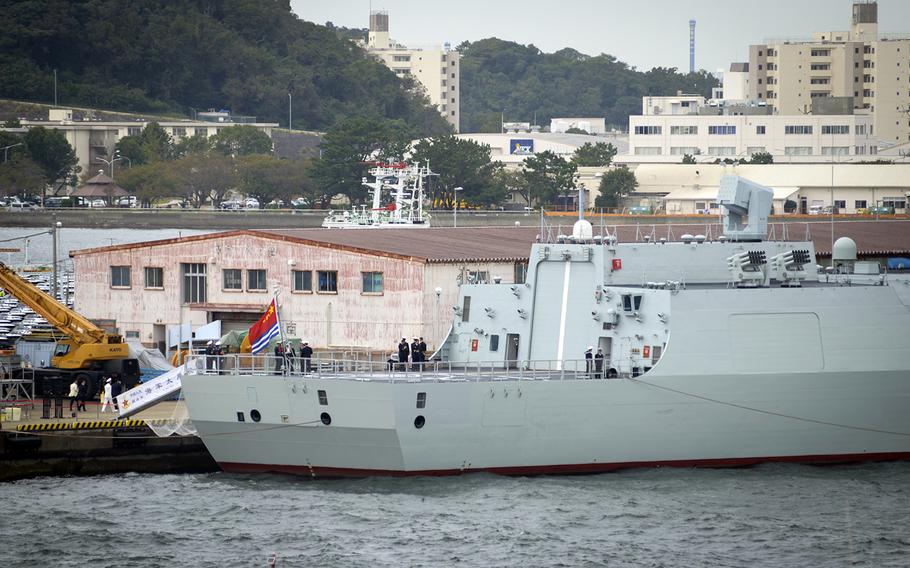 Chinese sailors and visitors stand aboard the destroyer Taiyuan at Yokosuka Post, Japan, Thursday, Oct. 10, 2019. The ship is in Japan to take part in the country's international fleet review. (Christian Lopez/Stars and Stripes) Chinese sailors and visitors stand aboard the destroyer Taiyuan at Yokosuka Post, Japan, Thursday, Oct. 10, 2019. The ship is in Japan to take part in the country's international fleet review. (Christian Lopez/Stars and Stripes)

YOKOSUKA, Japan — The Chinese navy guided-missile destroyer Taiyuan anchored at Yokosuka Port on Thursday, less than a mile from Yokosuka Naval Base, home of the U.S. 7th Fleet.

The ship is expected to participate for the first time in the Japan Maritime Self-Defense Force International Fleet Review on Monday in Sagami Bay.

A group of about 30 visitors and 25 Chinese sailors walked around the Taiyuan’s deck from stern to bow about 11 a.m. Thursday.

Chinese navy representatives are conducting “courtesy exchanges with peers from the JMSDF and navies of other countries,” according to a Chinese Ministry of National Defense statement Tuesday. They also plan to host “military and cultural exchanges” such as sports competitions and deck receptions “to further enhance mutual understanding, promote traditional Chinese culture and spread peace and friendship.”

“All service members will display high spirit, excellent military skills and good image of the [Chinese] sailors and demonstrate the great achievements of [China’s] naval modernization,” the statement said.

Taiyuan Vice Captain Gong Yuanxin told Chinese state media that the ship’s deck would be opened to the public during the fleet review, according to a Tuesday report by the South China Morning Post.

Gong also told state media that the visit’s goal is to “deepen communication with the navies of other countries and improve mutual understanding, and promote cooperation and mutual trust,” according to the newspaper.

Japan holds the international fleet reviews about once every three years. This year, an ally, South Korea, was not invited to the event, a consequence of a low point in relations between the two countries.

The event kicked off Sunday with a four-country panel discussion on sea power in the Indo-Pacific region.

Experts from the U.S., Australia, India and Japan talked rising Chinese threats and preserving free navigation in the South China Sea, which China views as its own territorial waters.

For example, China and Japan dispute sovereignty over a small, uninhabitable group of islands in the East China Sea, called in Japan the Senkakus and in China the Diaoyu. Four Chinese coast guard vessels defied Japanese claims and sailed there in July.

In June, a Chinese aircraft carrier and four other warships sailed in Japanese territorial waters between the islands of Okinawa and Miyako, the Japan Joint Staff said at the time.

In April, Japan participated in the Chinese navy’s international fleet review, sending the guided-missile destroyer JS Suzutsuki to the port city of Qingdao, the JMSDF’s first visit to China in seven years.

The U.S. Navy, which is also taking part in Japan’s fleet review, was invited to the Chinese fleet review but declined the invitation.

The Taiyuan sailed to Yokosuka from its homeport in Zhoushan near Ningbo, China, according to the ministry statement.

Commissioned in December, the Taiyuan displaces more than 6,000 tons, according to the National Defense Ministry.

The Taiyuan carries a helicopter and a crew of 200 is equipped with a vertical missile launching system and a flat-paneled active electronically scanned array radar system, according to Tuesday’s South China Morning Post report.

By comparison, U.S. Arleigh Burke-class destroyers, such as the Yokosuka-based USS Mustin, which will participate in the fleet review Monday, displaces between 8,230 and 9,700 tons, according to the U.S. Navy.

Navies from more than 10 countries, including the U.K., India, Australia, Canada and Singapore are expected to participate in the fleet review.

Incoming Typhoon Hagibis is on track to hit Yokosuka late Saturday, but officials are waiting until Sunday morning to determine whether the fleet review will be canceled, a JMSDF spokesman told Stars and Stripes on Wednesday.