China reorganizing military to close gap with US 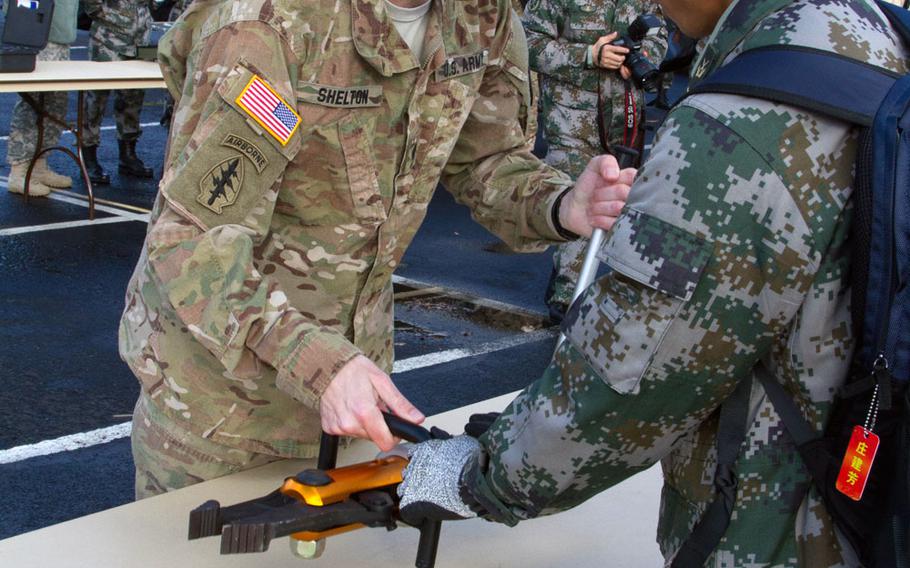 Lt. Col. Jason Shelton, plans officer, I Corps, gets some hands-on learning on the use of some of the machinery used by soldiers in the People’s Republic of China People’s Liberation Army during emergency and disaster relief efforts at the Disaster Management Exchange held at Joint Base Lewis-McChord Nov. 16-21, 2015. ( Patricia McMurphy/ U.S. Army photo)

Lt. Col. Jason Shelton, plans officer, I Corps, gets some hands-on learning on the use of some of the machinery used by soldiers in the People’s Republic of China People’s Liberation Army during emergency and disaster relief efforts at the Disaster Management Exchange held at Joint Base Lewis-McChord Nov. 16-21, 2015. ( Patricia McMurphy/ U.S. Army photo) 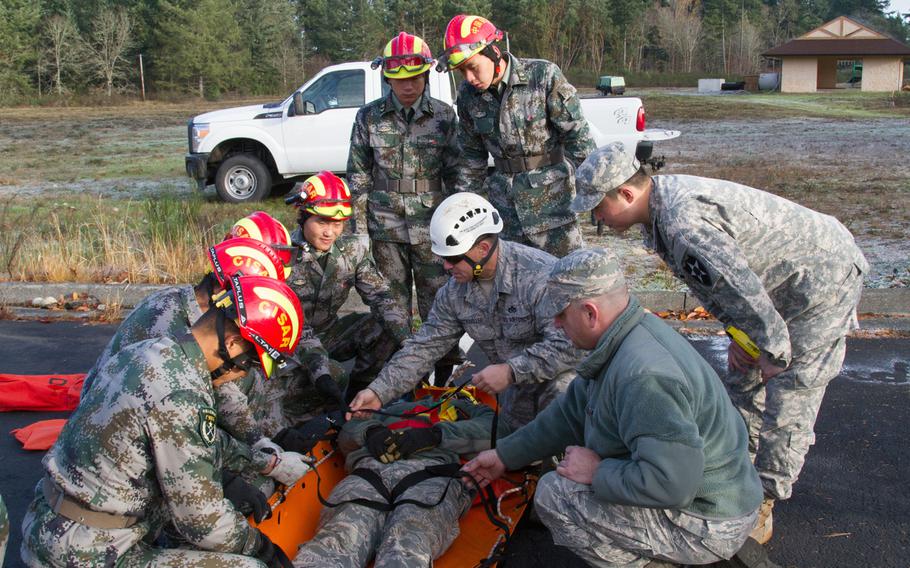 The restructuring is the most profound undertaken since the 1950s when Soviet advisers helped modernize the nation’s post-civil war military, changes that will likely challenge long-held assumptions by the Pentagon, according to David M. Finkelstein, director of the China Studies division of CNA, a Washington, D.C.,-based research center.

The reorganization, which officially launched Jan. 1, will fundamentally redefine the roles, missions and authorities among the services — particularly the People’s Liberation Army, or PLA — and the Central Military Command, Finkelstein wrote in a paper released Friday.

The changes include disbanding the country’s seven military regions and replacing them with joint-warfighting commands in charge of “war zones” or “theaters of operation.” Also newly formed will be the PLA Rocket Force, which will be responsible for the nation’s nuclear and conventional missiles.

“Should the proposed reforms be successfully implemented, the PLA will emerge as a much more capable, lethal and externally oriented fighting force,” concluded a status report on the U.S. rebalance to the Pacific by the Center for Strategic and International Studies, a Washington, D.C.,-based think tank.

While the branches of the U.S. military have a certain degree of autonomy, China’s services have grown increasingly independent and even run their own moneymaking industries. There have long been concerns about the risk a major conflict could be set off by a miscalculation from a Chinese commander making decisions with little knowledge or control from Beijing — particularly during frequent confrontations over disputed islands in the South and East China seas.

Although much remains vague about how the restructuring will take place, China’s civilian and military leaders have recognized that its armed forces lag behind the U.S. military in important aspects.

The CSIS report said the PLA’s assessment of the Chinese military’s actual warfighting capability “remains quite negative.” The PLA has argued in published comments that its current command structure, modes of training, command-and-control systems and modes of operation are insufficient for modern warfare.

China’s current national command structure dates back to 1985, when it viewed the neighboring Soviet Union as the most likely threat.

“That structure has little inherent capacity for joint service integration and expeditionary operations; in fact, it is a key impediment,” the CSIS report said.

The United States took a major step ahead in integrating leadership of the services when President Ronald Reagan signed the Goldwater-Nichols Act in 1986. The reform centralized military advice in the Chairman of the Joint Chiefs instead of the service chiefs.

This appears to be the PLA’s own “Goldwater-Nichols moment,” Finkelstein wrote.

The current restructuring appears to be part of a larger political agenda masterminded by President Xi Jinping, who assumed office in late 2012. But while Xi had “undoubtedly approved the major contours” of the restructuring, Finkelstein wrote that he believed the essence of military reform “could only have come from within the PLA itself,” from “the professionals who have seen the need for change for some time.”

The reorganization carries political, institutional and operational mandates for the military.

Politically, Xi appears to be trying to make the military more “red” by re-concentrating power and authority over the armed forces by the Central Military Commission, which Xi chairs, Finkelstein wrote. The military commission is an organ of the Central Committee of the Communist Party of China.

Unyielding party control of the PLA “is viewed as a prerequisite for pushing through this reorganization and reform because so many institutional and personal interests throughout the military are going to be adversely affected,” Finkelstein wrote.

Many details about how the reform will look institutionally are unknown, but changes are expected to the logistics system, armaments, research and development, balance of forces among services, ratio of officers to enlisted personnel, location of force deployments, the military justice system and many other realms.

A new, independent layer of oversight over the PLA is intended to reduce the “rampant corruption across the officer corps,” Finkelstein wrote. At the core of the operational reform will be streamlining command-and-control authority to better conduct “modern, information-intensive joint campaigns — especially in the maritime-aerospace battlespace domains, which are the domains in which PLA strategists believe China’s most pressing operational contingencies reside,” Finkelstein wrote.

To that end, China’s seven long-standing military regions will be dissolved, replaced by “war zones” or “theaters of command.” Warfighting command and control will go directly from those zones to the Central Military Commission, Finkelstein wrote. There have been no official announcements about how many new theaters will be created. Although the PLA Rocket Force will oversee the country’s nuclear and convention missiles, it remains unclear whether that responsibility includes the nuclear assets of the PLA Air Force and PLA Navy, Finkelstein wrote.

According to Xinhua, China’s state news agency, Xi said Jan. 1 that the mission of the rocket force was in part to “strengthen medium- and long-range precision strike force building, increase strategic checks and balance capability and strive to build a powerful modernized rocket force.”

The vast reorganization carries risk, particularly in light of China’s current woes with a plunging stock market and slowing economy. Party officials have made economic progress the linchpin of its governing legitimacy. The military reforms will leave about 300,000 people out of jobs, and local economies could be affected as military regions are stood down, Finkelstein wrote.

The reorganization is slated to be complete by 2020, but it could take years longer to make such a new system operate efficiently, he wrote. During the five-year phase-in period, the Pentagon will have to assess changes to and creation of counterparts between the two armed forces and whether ongoing programs and exchanges will be affected, he wrote.