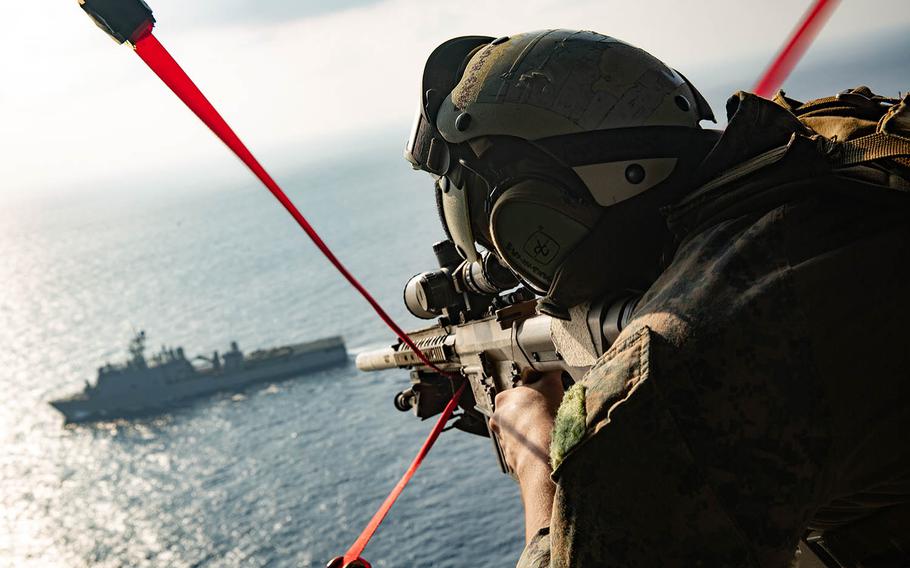 As its neighbors and the United States grapple with the coronavirus, China is taking advantage of its improved strength to up the ante the South China Sea, a maritime security expert says.

The only major country to grow its economy during the pandemic, Beijing on Friday authorized its coast guard to fire on foreign vessels and destroy “illegal structures” in waters where Chinese territorial claims are disputed by neighbors and, in one case, rejected by an international court.

Philippines Foreign Secretary Teodoro Locsin Jr. characterized the move, in a Wednesday tweet, as "a verbal threat of war to any country that defies the law.”

China won’t likely attempt overt military action in the maritime territorial disputes, but it may employ more aggressive tactics short of that, according to Ian Chong, an associate professor of political science at the National University of Singapore.

“The Chinese might feel they are in a stronger position now relative to the other claimants and the U.S. so they might as well try to move the needle,” he said in a telephone interview Monday.

The South China Sea and its vast natural resources are the subject of territorial disputes involving China, Taiwan, the Philippines, Vietnam, Brunei, Malaysia and Indonesia. China also has overlapping claims with Japan and Taiwan in the East China Sea.

“It’s interesting that there hasn’t been a stronger reaction from Vietnam or Indonesia,” Chong said. Many governments are focused on fighting the coronavirus and don’t have the resources to open other fronts, he said.

“The economic pressure means they are not looking for a fight right now,” he said.

The Chinese law might be a negotiating tactic amid stalled negotiations by South China Sea claimants on a code of conduct for the disputed waters, Chong said.

“It might be the Chinese trying to put forward a negotiating position that gets people back to the status quo that already benefited them,” he said.

The new law is “a smack in the face” of Philippines President Rodrigo Duterte, who thought he could negotiate to keep Chinese ships out of his country’s waters, according to Paul Buchanan, an American security analyst based in Auckland, New Zealand.

“That has now been proven to be a naive hope,” he said in a telephone interview Monday.

Duterte, who has ordered the Philippine navy not to join in freedom of navigation patrols conducted by U.S. warships in the South China Sea, will have to “put up or shut up” when it comes to Chinese incursions, Buchanan said.

“If he does not respond it will likely cause a rift between him and his navy commanders, if not the military as a whole,” Buchanan said.

The latest Chinese move is “lawfare” said Carlyle Thayer, an emeritus professor at the University of New South Wales and lecturer at the Australian Defence Force Academy.

“They keep moving goalposts to justify their indisputable sovereignty over the South China Sea,” he said in a telephone interview Monday.

China has moved away from the “nine-dash line” – based on an old map used to justify sea territory claims since the 1940s - and now promotes a “four-sha” claim to the Pratas Islands, Paracel Islands, Spratly Islands, and the Macclesfield Bank area, he said, of the features whose Chinese names all end in “sha.”

“They have done it by drawing straight base lines around all these disputed features,” Thayer said. “They claim all the water inside as territorial waters.”

The vast majority of those features are occupied by Vietnam, which has installed structures that China could seek to remove under its new law, he said.

“They have been trying to establish in the public mindset that this is Chinese,” Thayer said of the sea territory claims.