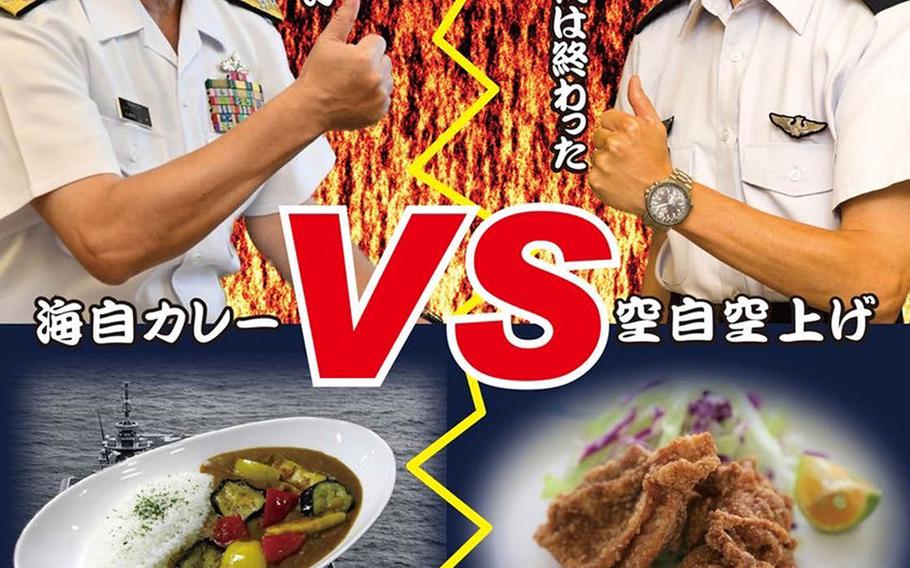 Curry is the favored dish among Japan's maritime force, while the air wing prides itself on its outstanding fried chicken. (Japan Air Self-Defense Force)

Curry is the favored dish among Japan's maritime force, while the air wing prides itself on its outstanding fried chicken. (Japan Air Self-Defense Force) 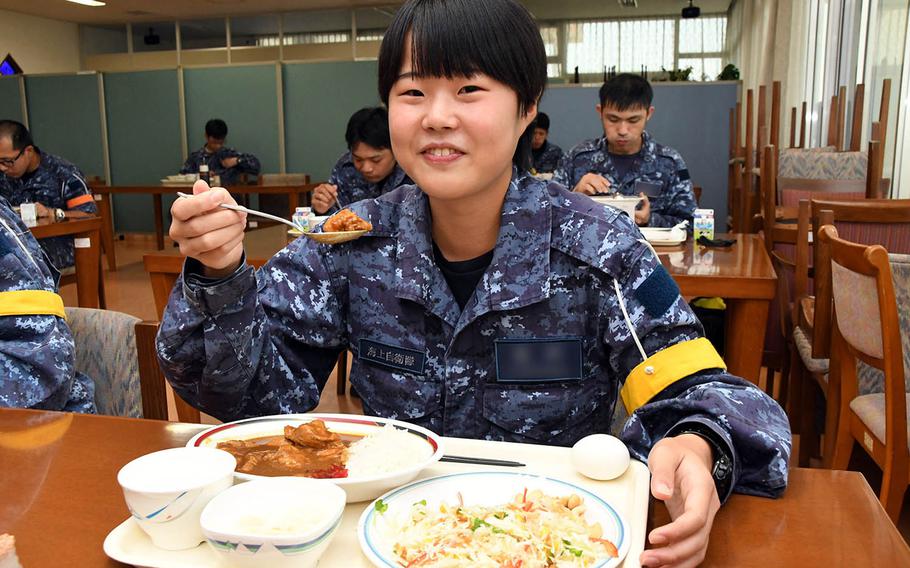 Every Friday, the maritime bases around Japan post photos of their curries on social media that elicit such comments as "Wow it looks delicious!" and "Makes me want to eat curry for lunch!" (Japan Maritime Self-Defense Force) “Listen JMSDF, curry’s prime time is over,” says the caption next to Izutu’s photo.

Curry is the favored dish among the sea-going force. The air wing prides itself on its outstanding fried chicken.

“Hey JASDF, we don’t think you have what it takes,” Yamamura tweeted in response.

The Twitter taunts over their respective dining specialties are part of the SDF’s use of social media to build morale and raise the services’ profiles among the public, according to a JASDF spokesman.

The public can weigh in another six days on a Twitter poll on the JMSDF or JASDF accounts. Of 9,000 votes already cast, the leading choice by a 60% margin is curry over fried chicken.

The battle for curry or chicken unfolded Oct. 27 with a challenge from Yamamura on the JMSDF website that threw a hint of shade: “We heard that JASDF Chief of Staff Izutsu launched a ‘fried chicken’ campaign against our famous curry. We are not sure whether we should quietly support the campaign or not.”

The statement concluded with the Japanese character for “laugh.”

Laughing matter or not, the JASDF responded on its website with a statement from Izutsu with the polite suggestion of you’re on.

“We will do our best to promote our fried chicken,” according to Izutsu’s statement, “so please accept our challenge.”

The JMSDF website lists 33 curry recipes from various bases around Japan as well as original recipes from individual vessels.

At Naha Air Base on Okinawa, the favorite is curry with jushi rice, the locally famous rice mixed with seaweed and vegetables and cooked in a soy-sauce dashi broth. The curry is fruit-based and sweet, and topped with nankotsu soki, or mouth-watering, slow-cooked sparerib cartilage.

Curry was embedded in Japan’s navy from the start. The Imperial Japanese Navy was modeled at its founding in 1872 on the Royal Navy, according to the JMSDF website. The British fed their sailors curry because it’s tasty, rich in nutrition and easy to make in bulk.

The Japanese navy started serving curry on Saturdays but eventually switched to Fridays after the government closed for business on the weekends. According to the JMSDF website, its troops consume about 45 tons of curry a year, about 2.25 million meals.

Every Friday, the maritime bases around Japan post photos of their curries on social media which elicit such comments as “Wow it looks delicious!” and “Makes me want to eat curry for lunch!”

On JASDF bases, the last Friday of the month is karaage, or fried chicken, day. Its website lists 66 recipes across its installations. Each air base adds local staples to spice up its signature dish, according to the website.

The air force uses a unique kanji character that represents “sky” and “rise” to describe its fried chicken because the JASDF, like its U.S. counterpart, aims higher, according to its website.

The JASDF has no plans to expand its fried chicken option beyond once a month, a spokesman told Stars and Stripes by phone Nov. 3.

“We have been promoting our karaage since March 2018 and we are happy to get recognized by media lately,” the JASDF spokesman said. “Our goal is to get more popular than maritime curry.”