Casualties down but IED attacks continue with cheap materials 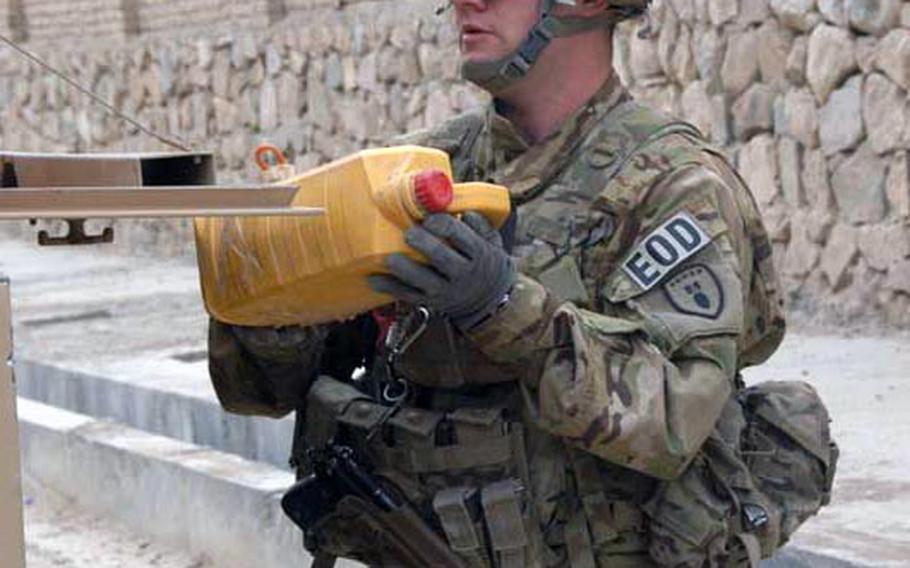 Buy Photo
Sgt. B-Wesley Sanders, 25, of Corpus Christi, Texas, who is working with the 630th Ordnance Company out of Fort Riley, Kansas, retrieves a container of homemade explosive from a street in Qalat, Zabul Province, Afghanistan in September. (Seth Robson/Stars and Stripes)

Buy Photo
Sgt. B-Wesley Sanders, 25, of Corpus Christi, Texas, who is working with the 630th Ordnance Company out of Fort Riley, Kansas, retrieves a container of homemade explosive from a street in Qalat, Zabul Province, Afghanistan in September. (Seth Robson/Stars and Stripes) 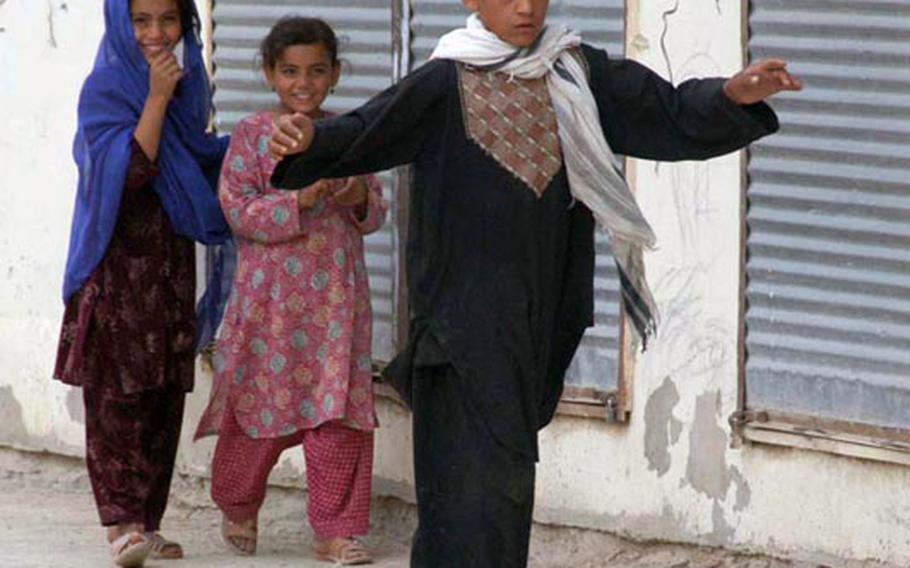 Buy Photo
Afghan kids play in the street about 50 yards from a plastic container of explosive that U.S. Explosive Ordnance Disposal troops retrieved in Qalat, Zabul Province, Afghanistan in September. Despite billions of dollars in equipment and training, officials have been unable to lower the number of IED attacks. (Seth Robson/Stars and Stripes) 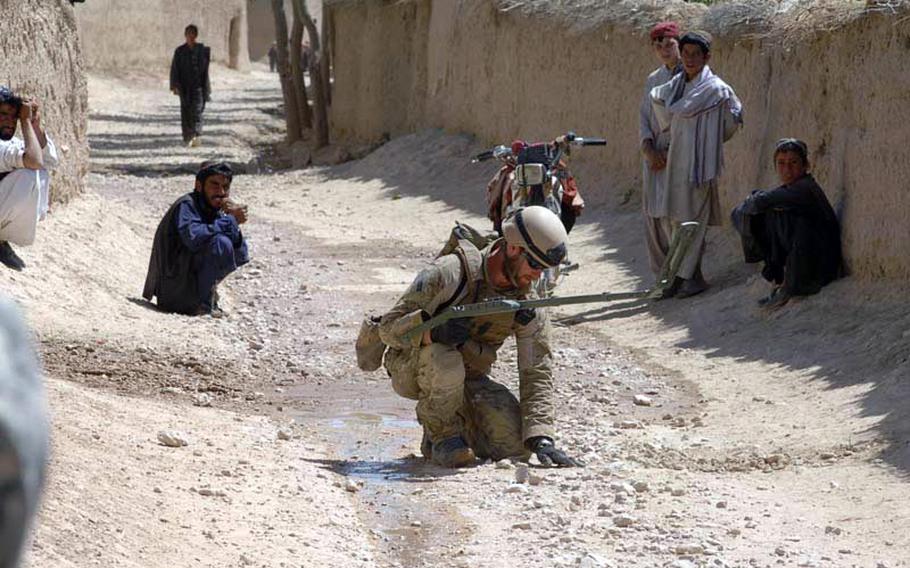 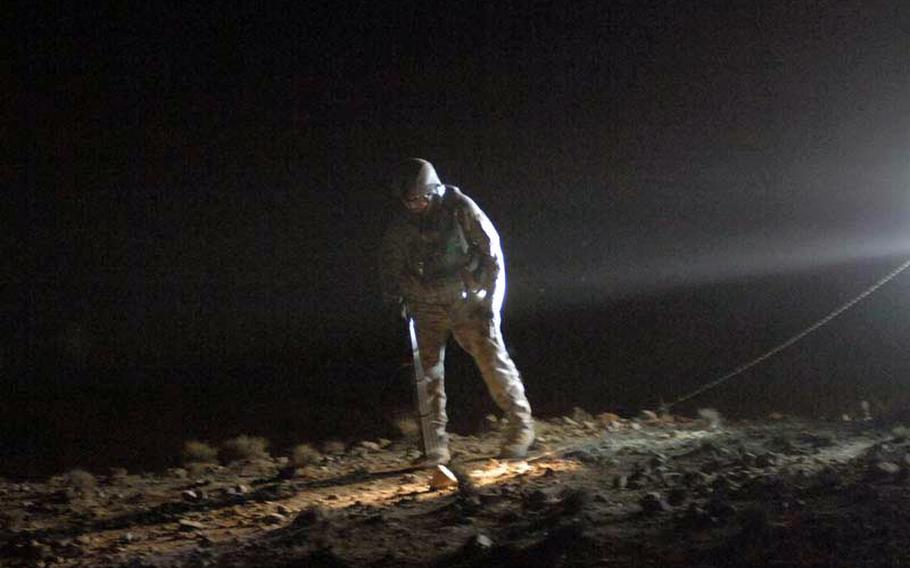 Buy Photo
Air Force Tech Sgt. Jacob Monelo, 35, of Sacramento, Calif.,uses a metal detector to scan for booby traps while tracing the command wire of a bomb discovered in Kanahar Province, Afghanistan in August 2010. Officials predict that IED attacks with top 16,000 for 2012, the second straight year of reaching that figure. (Seth Robson/Stars and Stripes)

ZABUL PROVINCE, Afghanistan - Despite the U.S. military spending more than $65 billion over the past six years fighting roadside bombs, officials at the Joint Improvised Explosive Device Defeat Organization predict attacks with the devices in Afghanistan will top 16,000 for the second straight year.

JIEDDO, as the organization is known, was formed in 2006 in response to mounting casualties from insurgent bombs in Iraq. Former U.S. Central Command chief John P. Abizaid had called for a "Manhattan Project-like" effort to defeat the devices, referring to the U.S. effort during World War II to develop the first atomic bomb.

But instead of IED attacks falling - there were just 3,014 in Afghanistan in 2007 - the 2012 number is expected to equal or slightly exceed the 16,689 reported there last year, even though there are now 33,000 fewer U.S. troops deployed in the country.

The reason? The Taliban doesn't seem to have any shortage of cheap bomb-making materials, according to Al Sweetser, JIEDDO operations research systems analysis division chief.

A typical Taliban bomb contains little or no metal and is victim-operated, for example, by a soldier who steps on a spring or snags a trip wire. It might contain explosives derived from ammonium nitrate fertilizer or potassium chloride, used in match factories, he said.

While JIEDDO has been unable to cut down on the number of insurgent attacks, it has been able to successfully reduce the "effective attack rate" - the percentage of IEDs that cause casualties.

Reports posted on the iCasualties website on Thursday showed 124 foreign troops killed by improvised bombs in Afghanistan so far in 2012, down from 368 there in 2010.

That's been achieved by spending $45 billion on armored vehicles and more than $20 billion on training for troops, acquiring high-tech bomb detectors and surveillance gear and using CSI-style investigation techniques to break up the insurgent networks that make and emplace the bombs.

Few would dispute the value of saving lives, but experts have begun to question the wisdom of paying so much money to battle a weapon that costs the enemy next to nothing.

"We have to figure out how to alter the investment ratio," security researcher Peter Singer wrote in a recent article posted on the Brookings Institute website. "This is not just a budgeting issue. It is unsustainable to keep throwing billions of dollars to fight a technology that costs the other side tens of dollars. We need not silver-bullet solutions but ones that are cheap and scalable."

The main way U.S. forces are trying to influence the number of attacks is by cutting supply chains and blocking the acquisition of precursors that enable insurgents to stage attacks, Sweetser said in a phone interview.

Those efforts include trying to get manufacturers to add neutralizing chemicals to fertilizer, the base ingredient for most of the Taliban's homemade bombs.

The amount of homemade explosives - most made from ammonium nitrate fertilizer - discovered by security forces in Afghanistan is up 66 percent on what was being found at this time last year, Sweetser said.

"In the last 90 days, we have confiscated 118 tons of HME," he said, adding that 10 pounds of explosives are commonly used in a Taliban bomb targeting troops on foot patrols. "One hundred and eighteen tons is a tremendous capability for the insurgents to stage IED attacks."

Yet, try as they might, U.S. military commanders haven't been able to cut the rate of attacks.

"In June this year, we had the most (attacks with) IEDs of any month we have ever had in Afghanistan," Sweetser said.

And there's growing evidence that the danger of roadside bombs won't go away, even after the U.S. campaign in Afghanistan ends.

"Whoever you talk to would agree that IEDs are an enduring threat and it is something we will need the capacity to counter wherever U.S. forces are expected to perform missions," he said.

JIEDDO reports that, in August alone, 262 devices exploded in countries outside Iraq and Afghanistan, including attacks in Africa, Russia, Turkey and Mexico that killed 347 and wounded 694.

"The IED has proved to be a cheap, relatively easy-to-use tool against both civilians and advanced militaries," Singer said. "And so it will continue to be copied. The IED is not disappearing; rather it is proliferating."

Future efforts to counter improvised bombs need to focus on things that will work in all kinds of environments, including urban battle zones. They also need to take account of technological advances that could see terrorists attack with robotic bombs or even devices attached to remote-controlled aircraft, he said.

David Johnson, of the Center for Advanced Defense Studies in Washington, said the threat of roadside bombs is increasing because they're effective.

"It works at a strategic level against us," he said. "They (America's adversaries) know we are really worried about one or a few people being blown up by a landmine and they think that will drive us out and, from the evidence, it appears to be so."

Afghan forces operating in southern Afghanistan this summer still required extensive support from foreign troops to counter improvised bombs, complicating hopes that Afghans will take over the bulk of the fight against the Taliban.

Sweetser said it's unclear what JIEDDO's role will be, if any, after U.S. combat troops leave Afghanistan.

"We are expecting JIEDDO will remain with our current mission through 2014," he said. "How the counter-IED support will be provided and what organization will be doing that (in the long term), we don't know at this point."

The U.S. Explosive Ordnance Disposal soldiers supporting the Afghans now are using gear and techniques provided by JIEDDO, but many don't know much about the organization.

Sgt. Wesley Sanders, 25, of Corpus Christi, Texas, is working in Zabul province with the 630th Ordnance Company out of Fort Riley, Kansas. During three months in Panjwai district in Kandahar province earlier in the summer, his unit encountered 13 bombs, he said.

The 630th soldiers get a lot of information about improvised bombs and some nifty equipment, such as backpacks that jam remote-controlled devices, Sanders said. But he doesn't know where it comes from.

"I've never heard, &lsquo;This is a JIEDDO piece of equipment,'" he said.

Likewise, Sanders said, he doesn't know if the information that he and other troops collect on the battlefield ends up at JIEDDO.

However, Sgt. 1st Class Winston McElrea, 33, of Seattle, who is on his fourth tour of Afghanistan dealing with roadside bombs, said he greatly appreciates the job JIEDDO's doing.

"A lot of the rapid fielding (equipment sent to combat zones by JIEDDO) has definitely been helpful," he said. "The handheld detectors for sweeping routes when dismounted have helped us find a lot of things that we wouldn't have found otherwise."

"It is not just something in your hand," said McElrea, who regularly checks JIEDDO's websites for updates on the latest counter-IED tactics. "It is passing information around."

For example, intelligence assistance provided by JIEDDO to track down insurgents has also been invaluable, he said.

Johnson said the end of combat in Afghanistan could see JIEDDO retained as a slush fund for the military service branches to access funds for counter-IED efforts or its functions might be absorbed by other organizations.

Whatever is decided, the U.S. should cut how much it spends battling improvised bombs, he said.

"We should absolutely not be spending that much money," he said of JIEDDO's multibillion-dollar budget.

There might also be more cost-effective ways to operate in areas where there's a threat from roadside bombs, such as avoiding the use of soldiers to gather information when local nationals could do the job and not providing insurgents with easily identifiable targets by driving distinctive vehicles on regular, predictable routes, Johnson said.

However, it does not appear that the improvised explosive device can be defeated at the tactical level, he said.

"The most effective way to deal with the problem of roadside bombs is by addressing the grievances that lead people to emplace the devices," he said.