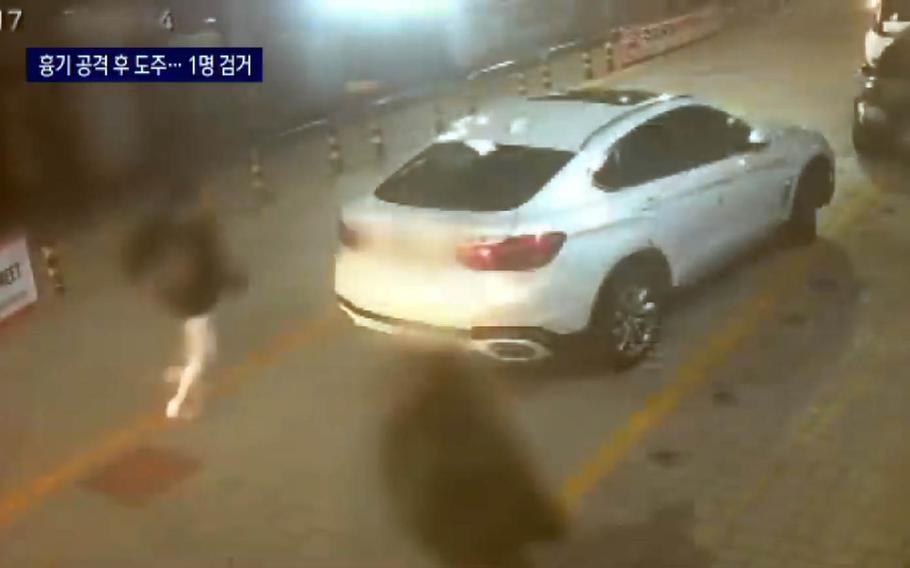 This screenshot from a Channel A News broadcast shows closed-circuit TV footage of suspects fleeing the scene after a U.S. soldier was stabbed at a bar near Camp Humphreys, South Korea, April 17, 2021. (Channel A News)

CAMP HUMPHREYS, South Korea — A soldier assigned to this Army installation south of Seoul was in stable condition Wednesday after being stabbed in the stomach while drinking at an off-base bar over the weekend, according to local police.

Police responded around 9 p.m. Saturday to a report of a U.S. soldier stabbed at a bar in Pyeongtaek, Gyeonggi province, according to emails Monday and Tuesday from a Pyeongtaek police detective who responded to questions from Stars and Stripes. Some government officials in South Korea typically speak to the media on condition of anonymity.

Closed-circuit TV at the bar captured four suspects, two Koreans and two foreigners, fleeing the scene in two cars, nearly colliding with traffic as they made a quick getaway, according to the detective.

A South Korean TV news station, Channel A, aired the video and posted it on YouTube.

The video shows U.S. military police arriving on scene, followed by South Korean paramedics who took the soldier to a local hospital. His wound was not life-threatening, according to the detective.

Police traced the license plate numbers and questioned at least one Korean suspect who said he was at the bar meeting friends and did not stab the soldier.

In his statement to police, the victim, a 22-year-old corporal, said he was drunk, hardly remembered details of the assault and doesn’t know the suspects, according to the detective.

“We are aware of reports which involved a U.S. service member being stabbed in Pyeongtaek,” said Col. Lee Peters, USFK spokesman. “We are cooperating with the [Korean National Police] who maintain jurisdiction of this investigation.”