Camp Carroll to be home of Army’s biggest warehouse 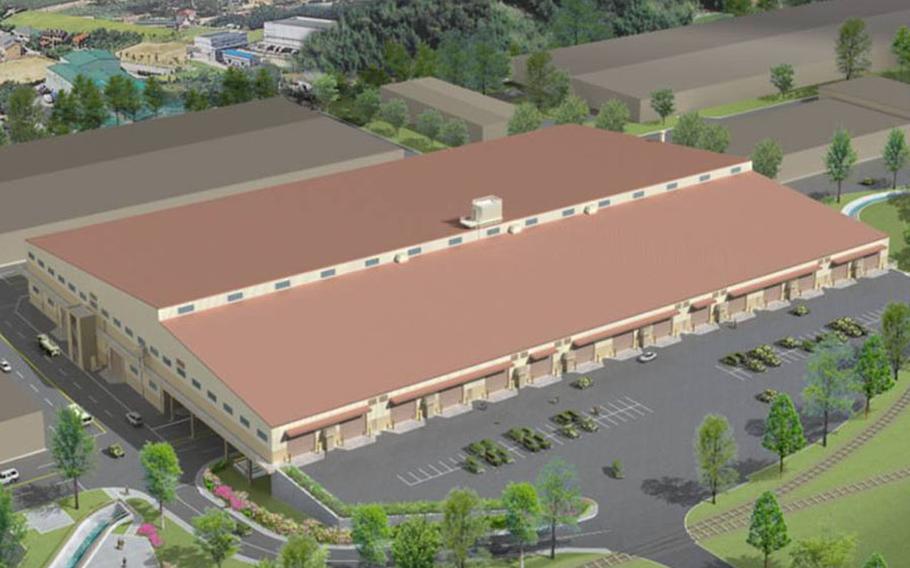 This is an artist’s rendering of the humidity-controlled warehouse now under construction at Camp Carroll in Waegwan, South Korea. Slated for completion in January 2012, the warehouse will allow the Army to bring under a single roof a set of combat vehicles stored for a heavy brigade combat team to use should there be an outbreak of war in South Korea. The warehouse is expected to help the Army keep the vehicles in good order longer, and avoid nearly $2 million a year in maintenance and related costs. (Courtesy of the U.S. Army)

PYEONGTAEK, South Korea &mdash; A new warehouse that will be the Army&rsquo;s largest worldwide &mdash; big enough to cover six football fields &mdash; is going up at Camp Carroll, and will house combat vehicles.

The $29 million, two-story, humidity-controlled warehouse will measure 350,000 square feet and be able to hold all the vehicles in a heavy brigade combat team &mdash; Abrams tanks, Bradley fighting vehicles and others &mdash; under a single roof, officials said.

The new structure will mean the vehicles will stay in working order longer and help avoid millions a year in maintenance costs, officials said. It&rsquo;s slated for completion in January 2012.

Officials opted for a single warehouse rather than dispersing the equipment among many others in part because the confined spaces of Camp Carroll made it the best option, said Lt. Col. Karl S. Ivey, spokesman for the 19th Expeditionary Support Command in Daegu.

Officials believe the risk of an enemy strike destroying the entire warehouse and its contents is outweighed by gains the warehouse would yield in keeping equipment battle ready, Ivey said.

&ldquo;Any motor pool or important piece of infrastructure is vulnerable to what may be an equivalent to a sucker punch from any adversary anywhere in the world,&rdquo; Ivey said. &ldquo;But, of course, that variable is a factor for both sides of a conflict. However, the gains in this situation outweigh the loss, because we&rsquo;re creating both improved working conditions, which garners efficiency, and better storage conditions for the equipment, which will ensure our equipment is at a higher state of readiness in the case of a conflict.&rdquo;

The Army keeps the combat equipment ready as part of its pre-positioned war stocks at Carroll&rsquo;s APS-4 area. At outbreak of war, soldiers with a heavy brigade combat team would arrive in Korea, head to Carroll in Waegwan, roll out the vehicles and take them into battle.

The combat team combines infantry and armored elements and typically consists of about 3,500 or more soldiers and a complement of about 58 Abrams tanks and 58 Bradley fighting vehicles, Ivey said.

The warehouse will have controls for adjusting the humidity, which in turn will mean the vehicles will last longer than if stored outdoors, said Roland Descoteaux, director of the Continuous Improvement office of the 403rd Army Field Support Battalion-North East Asia, at Camp Carroll.

Most brigade combat team vehicles currently are stored at several warehouses at Carroll. But hundreds of other support vehicles are parked in outdoor compounds,

Officials believe the new warehouse will enable them to avoid about $1.8 million a year in maintenance and related costs, he said.

Keeping vehicles outside, exposed to the elements, leads to rust and deterioration that costs nearly $2 million a year in damage repair and replacement costs and adds to the Army&rsquo;s maintenance workload, Descoteaux said.

The new warehouse will be equipped so that vehicle batteries can be kept continuously charged. It also will ease the need to replace tires and other rubber products that rot more quickly because of weather exposure.

&ldquo;When you get up to replacing tires as tall as I am or bigger, the cost is pretty high,&rdquo; Descoteaux said.