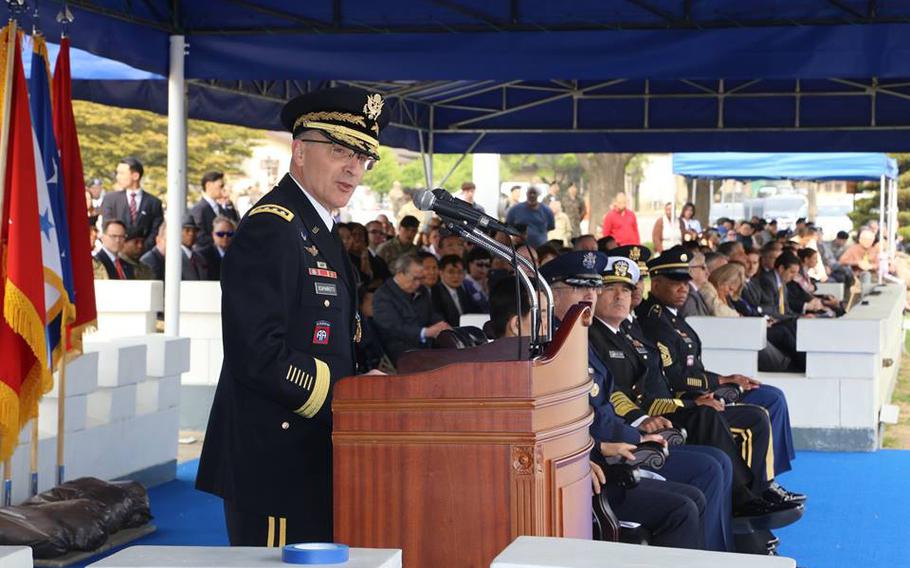 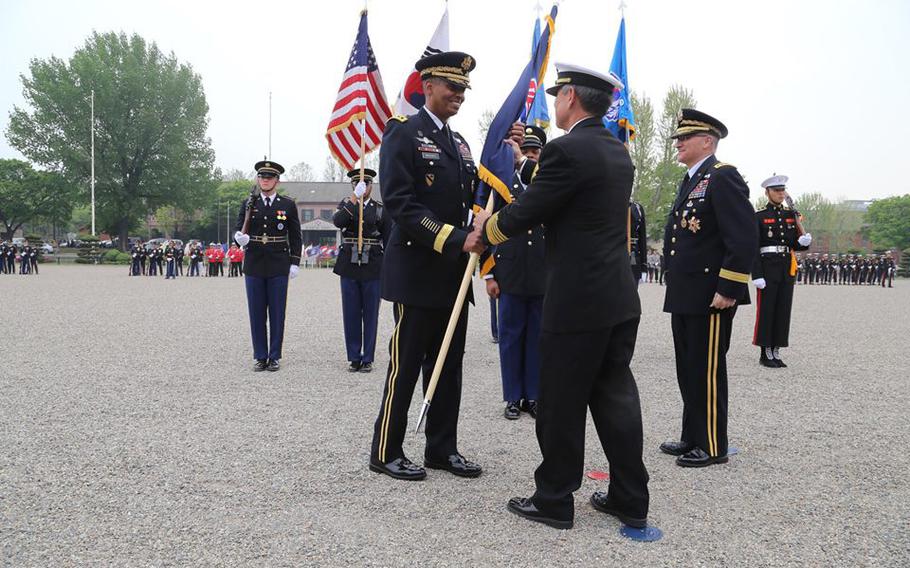 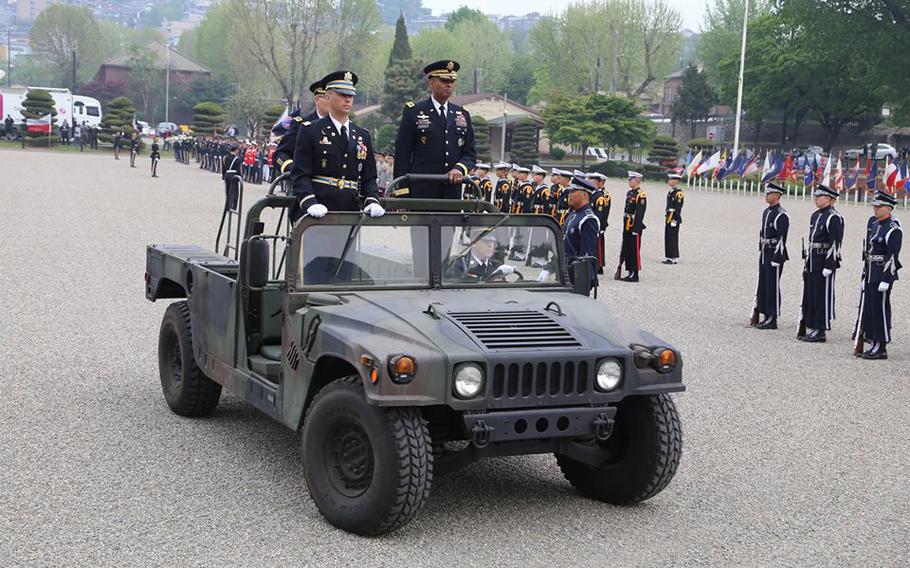 SEOUL, South Korea — Gen. Vincent Brooks warned of rising challenges as he took the helm of U.S. Forces in Korea on Saturday, while North Korea reportedly called joint military exercises in the South "tantamount to an open declaration of war."

In a ceremony at U.S. Army Garrison-Yongsan’s Knight Field, Brooks took over from Gen. Curtis Scaparrotti, who will become the next commander of U.S. European Command and supreme allied commander for NATO forces.

The change of command came as the U.S. and its ally South Korea face unprecedented threats from the North, which staged its fourth nuclear test in January, followed by a long-range rocket launch that prompted harsh new U.N. sanctions.

Pyongyang has escalated its weapons program with a series of missile tests, which are forbidden under Security Council resolutions. In the past two weeks, the North reportedly failed in efforts to launch three powerful mid-range missiles, but successfully fired a projectile from a submarine.

South Korea’s military also has been on high alert amid fears the North plans another nuclear test as leader Kim Jong Un seeks a show of force ahead of a ruling Workers’ Party congress next Friday.

"In the present day, the challenges continue to rise but so also do the strength of the alliance and the resolve of the United Nations," said Brooks, who also will be in charge of the U.N. Command and the South Korea-U.S. Combined Forces Command, and will oversee the consolidation of most U.S. forces at regional hubs south of Seoul.

About 28,500 U.S. servicemembers are stationed in South Korea, and the allies maintain close ties and regularly conduct joint training. The divided peninsula technically remains in a state of war after the 1950-53 conflict ended with a truce instead a peace treaty.

Underscoring the tensions, the North’s state-run Korean Central News Agency quoted an unidentified foreign ministry spokesman as calling the recent Foal Eagle exercises "the worst-ever military provocations that pushed the situation on the Korean Peninsula to the brink of a nuclear war."

The exercises were "tantamount to an open declaration of war" and "undisguisedly revealed the U.S. attempt to mount a pre-emptive attack" on North Korea, the spokesman said, according to the South Korean news agency Yonhap.

That statement came a day after the North accused U.S. soldiers of trying to provoke its forces by pointing fingers, and making strange noises and "disgusting" facial expressions across the heavily patrolled Demilitarized Zone that divides the countries.

The Americans denied the allegations.

He said the upside was that North Korean leader Kim Jong Un’s "provocative, irresponsible behavior" has not only strengthened the U.S.-South Korean alliance but also the trilateral Korean-U.S.-Japanese alliance. "Thank you KJU," he said ironically. Alarm over another nuclear test by the North has prompted discussions between U.S. and South Korean officials over the deployment of a sophisticated missile defense system called Theater High Altitude Area Defense System, or THAAD, to the South. China and Russia object to THAAD.

Brooks, 57, who was born in Alaska, graduated from the U.S. Military Academy in 1980, where he became the first African-American cadet in the school’s history to be named cadet brigade commander.

He most recently served as commander of U.S. Army Pacific. He’s also led the Third Army and the 1st Infantry Division. He became well-known to the American public when he served as a spokesman for the U.S. Central Command and appeared on live televised briefings during the early stages of the Iraq War.