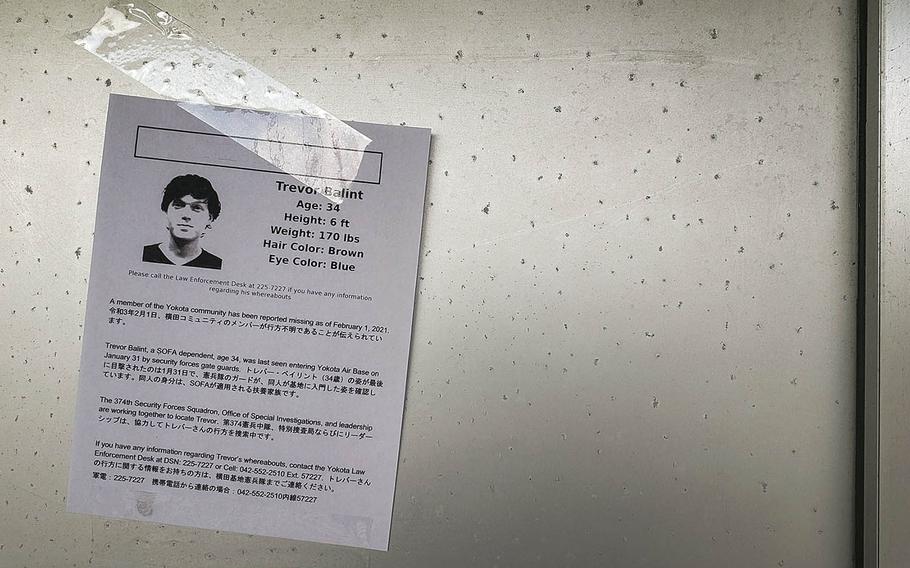 Trevor Balint, 34, went missing from Yokota Air Base in western Tokyo in the early hours of Feb. 1, 2021. (Theron Godbold/Stars and Stripes)

Trevor Balint, 34, went missing from Yokota Air Base in western Tokyo in the early hours of Feb. 1, 2021. (Theron Godbold/Stars and Stripes) 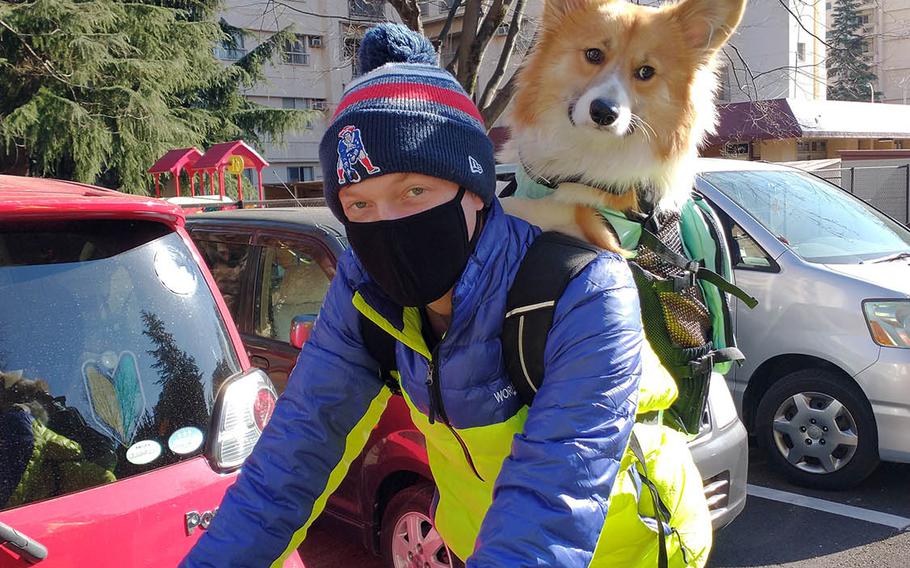 Trevor Balint poses for a photo with his corgi, Mr. Waffles, in this undated photo taken at Yokota Air Base, Japan. (Britni Balint) 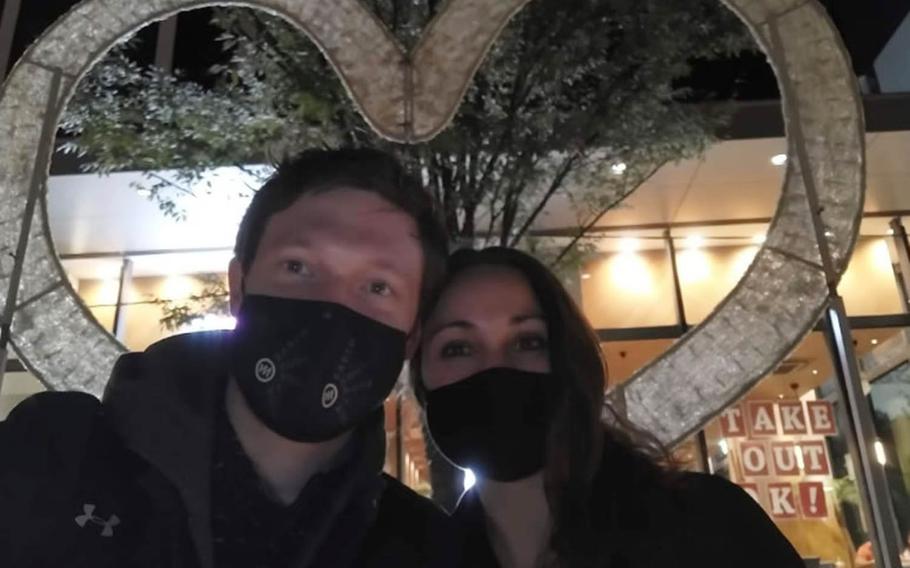 Trevor and Britni Balint pose together in an undated photo. Trevor, 34, was reported missing from Yokota Air Base, Japan, Feb. 1, 2021. (Britni Balint) 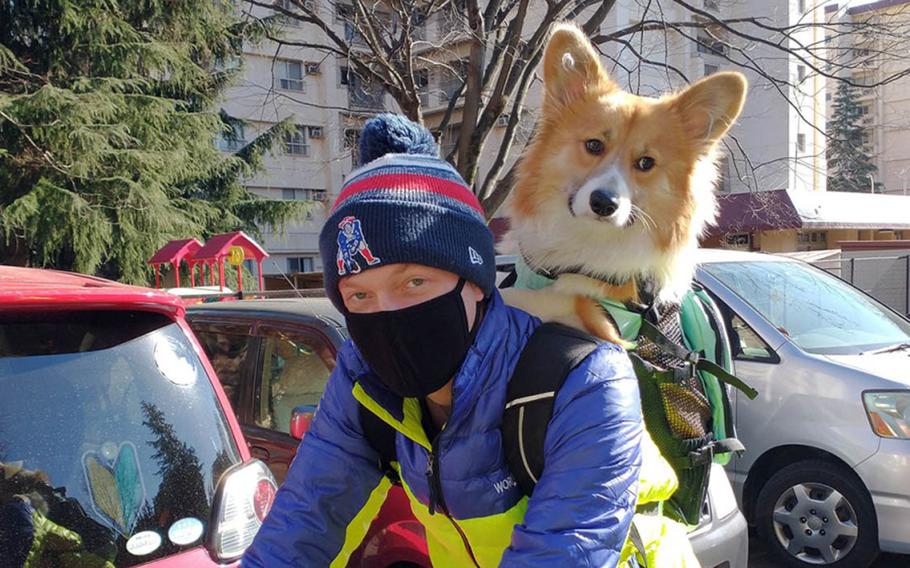 Trevor Balint poses for a photo with his corgi, Mr. Waffles, in this undated photo taken at Yokota Air Base, Japan. (Britni Balint)

YOKOTA AIR BASE, Japan – The body of a U.S. civilian reported missing more than two weeks ago was discovered Tuesday in the housing tower where he and his wife lived at Yokota, according to the Air Force.

Trevor Balint, 34, of Hubbard, Ohio, the spouse of a Defense Department computer programmer and analyst, disappeared suddenly Feb. 1, prompting a search of the base from the ground and the air. His face appears on fliers, fading now, posted everywhere at Yokota, the headquarters in western Tokyo of U.S. Forces Japan.

His body was found in the east side housing area around 11 a.m. Tuesday, according to a statement on the base website Wednesday. Balint, a former substitute teacher at Defense Department schools, was pronounced dead at the scene by medical personnel, according to the base.

“My sincerest condolences go out to the Balint family and friends, both here at Yokota and in the United States,” Col. Andrew Campbell, commander of Yokota’s 374th Airlift Wing, said in the statement. “The death of a member of our community always has a significant impact on our team and I’m deeply saddened to see the search for Trevor conclude this way.”

The investigation into Balint’s death is “open and ongoing,” pending a medical examiner’s official determination of cause and manner of death, according to the statement.

Balint’s wife, Britni Balint, 31, reported his disappearance after his wallet, cellphone, jacket and keys were found near their base apartment.

“They assured my daughter that all buildings and storage units had been searched,” said Mott, who arrived at Yokota on Friday. “To be found in his own building 16 days after disappearing is severely troubling.”

She said authorities had searched the area where the body was eventually found and assured her daughter they found nothing.

“The fact that it could be months to a year or more before the facts are released are troubling,” Mott said. “We feel like we know no more today than we did 16 days ago. Yokota Base truly failed Britni and Trevor.”

Trevor Balint’s disappearance prompted a days-long search by Air Force Security Forces, the Office of Special Investigations and base leadership with assistance from airmen, military families and Japanese police, according to the Yokota statement.

There is no indication of any risk to the community, the statement said.

Congressman Tim Ryan, D-Ohio, who phoned Campbell to discuss the case last week, said he was “devastated” at hearing of Balint’s death.

“I know that Trevor’s family still has many unanswered questions and I will do everything I can to ensure that they are provided as much information as is available to get the answers they need,” Ryan said in a statement Tuesday. “I will remain in close contact with military leadership at [Yokota] Air Base and the Balint family and will assist in any way necessary in the days ahead.”

Balint’s death is the second reported at Yokota this month. An investigation remains open into the Feb. 9 death of Kayla Ash, the spouse of a 374th Logistics Readiness Squadron member, the base said Wednesday.

However, the two deaths are not connected, and coronavirus is not considered a factor in the earlier case, the base said.