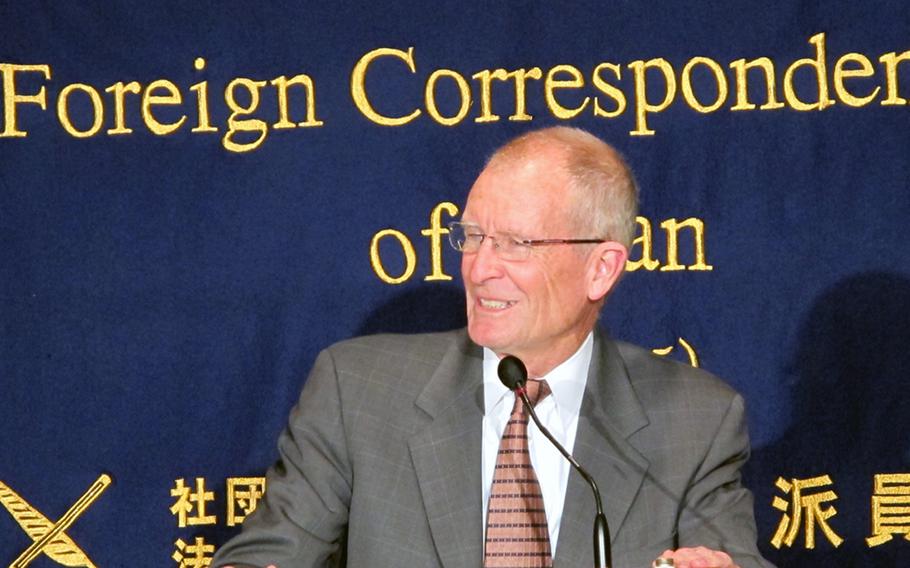 Buy Photo
Dennis Blair, retired admiral and former director of national intelligence, speaks with reporters in Tokyo on April 14, 2015. Blair stressed that cyberwarfare on a large scale between nations would likely have unintended consequences on civilians. (Erik Slavin/Stars and Stripes)

TOKYO — While cyberwarfare on a large scale favors a nation on the attack, it also carries the risk of unintended consequences, the former U.S. director of National Intelligence said Tuesday.

Dennis Blair, also a retired admiral and former chief of the Pacific Command, likened cyberwarfare between nations to the “mutually assured destruction” concept that guides thinking on the threat of nuclear war.

“Military communication and civilian communication are intertwined,” Blair told reporters. “Once you break the message in little bits, they all go on the same satellite links among countries, and it becomes very difficult to conduct a military cyberattack without having large collateral damage.”

Many systems developed originally for military use have since become crucial to civilian networks. Blair noted GPS, which guides everything from military combat to taxi directions and global financial transactions.

A cyberwar where attacks concentrate on such systems could potentially leave civilian populations and economies open to attack on both sides.

“It’s still true that in the balance between attack and defense in cyberwarfare, the advantage is with the attacker,” Blair said. “It is a lot easier to screw up someone else’s system that controls a large sector of the economy than it is to defend them.”

Aside from the extremes of cyberwar, lower-level cyberhacking and espionage are growing globally. In 2014, hacking cost the global economy $445 billion, according to a Center for Strategic and International Studies report.

On April 1, President Barack Obama signed an executive order authorizing the Treasury Department to financially sanction anyone using cyberattacks “that create a significant threat to the national security, foreign policy or economic health or financial stability of the United States.”

The U.S. has also accused China of cyberattacks, particularly on U.S. corporate systems. China has generally denied such claims. However, earlier this year a People’s Liberation Army research institute published a paper documenting the military’s cyberunits for the first time, according to media reports.

“The Chinese are mainly involved in intelligence actions now,” Blair said Tuesday. “They’re trying to break in anywhere they can take as much information as they can.”

However, Blair added that a growing number of Chinese leaders believe it is in China’s best interest to create norms to protect intellectual property, which is a common target of global cyberattacks.