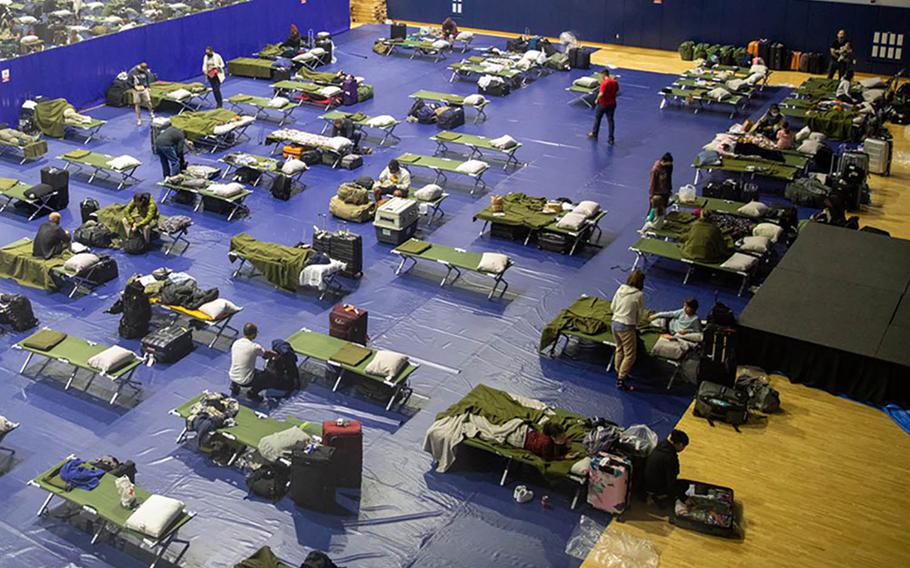 More than 150 service members and their families stayed overnight at the North Gym at the Marine Corps Air Station Iwakuni after their Patriot Express flight was struck by a bird Oct. 24, 2020. (Angelo Sagum/U.S. Marine Corps)

MARINE CORPS AIR STATION IWAKUNI, Japan — More than 150 passengers and 10 pets were forced to quarantine at an air station gym overnight Oct. 24 after a bird struck their Patriot Express flight aboard a Boeing 767.

The Patriot Express, commonly called the rotator, is a Defense Department contract flight used by service members and families who are traveling between the United States and overseas bases for new assignments or leave.

Due to coronavirus mitigation measures, all the passengers had to be kept apart from the MCAS Iwakuni population, base spokesman Maj. Joshua Diddams told Stars and Stripes on Friday via email.

Volunteers from the Preventative Medicine detachment, Marine Corps Community Services, the Red Cross, Chaplain Corps and the USO pitched in, too, Diddams said. He said headquarters squadron commander Lt. Col. Jonathan Hutchinson even made a late-night run to a convenience store to get milk for the children.

After a 24-hour stay, the passengers boarded the Patriot Express bound for Kadena Air Base, Okinawa.

“This situation served as another opportunity to highlight the capabilities and flexibility of MCAS Iwakuni,” Diddams said.