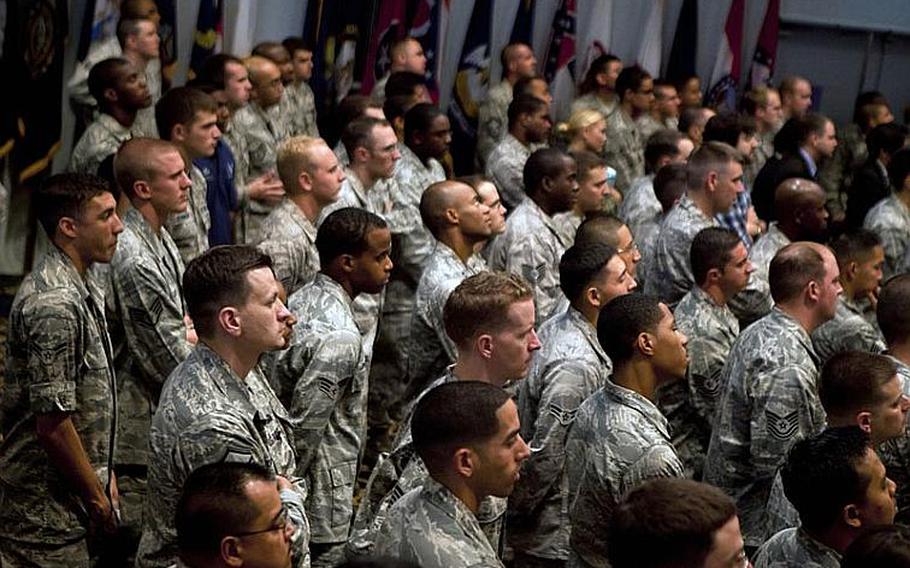 Buy Photo
Troops from the Army, Air Force, Marine Corps, Navy and Coast Guard take in the words of U.S Vice President Biden during his visit Wednesday to Yokota Air Base, Japan. (Grant Okubo/Stars and Stripes) 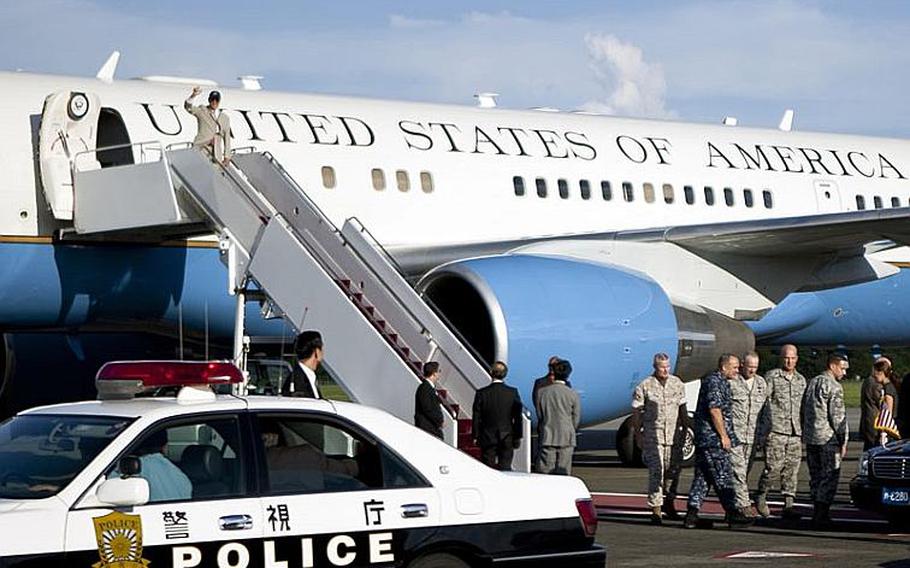 Buy Photo
U.S. Vice President Joe Biden bids farewell before departing from Yokota Air Base aboard Air Force Two after addressing some of the 24,000 U.S. troops who participated in Operation Tomodachi. (Grant Okubo/Stars and Stripes) 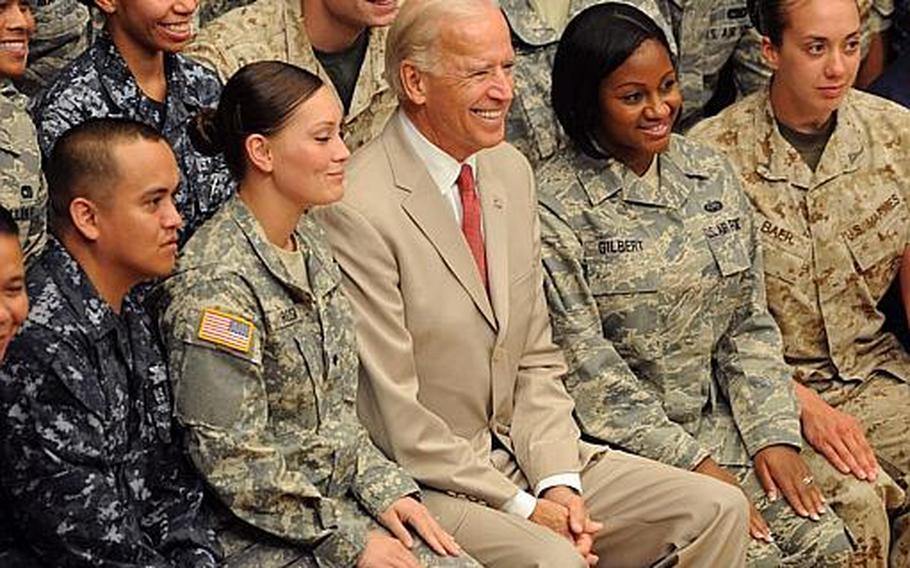 U.S. Vice President Joe Biden poses for a photo with the troops during his visit to Yokota Air Base, Japan, Wednesday (Stacy Moless/Courtesy U.S. Air Force) YOKOTA AIR BASE, Japan &mdash; Vice President Joe Biden concluded his nine-day Asia tour here Wednesday by thanking some of the 24,000 troops who participated in the massive military relief operation in Japan this spring.

&ldquo;What you accomplished here in Japan the past few months is astounding,&rdquo; Biden said. &ldquo;Thank you for making America look as good as we are.&rdquo;

Biden&rsquo;s thank-you to the troops came a day after he toured the devastated northern part of the country, including Sendai airport &mdash; among the first places U.S. troops deployed after the March 11 earthquake and tsunami.

The cleanup project at the airport literally helped clear the way for relief operations and was among the military&rsquo;s crowning achievements during Operation Tomodachi. Biden said it is the largest humanitarian relief effort in U.S. history.

&ldquo;You guys are awe-inspiring,&rdquo; Biden told servicemembers before stepping off stage to shake hands and take pictures with them.

Among the crowd was Air Force Capt. Rob Carranza, a C-130 navigator with the 36th Airlift Squadron at Yokota, who said Biden&rsquo;s praise echoed similar thanks from the Japanese during the height of the crisis.

&ldquo;It was almost like we were royalty,&rdquo; Carranza said, recounting the endless gratitude bestowed upon U.S. troops by the Japanese during the relief efforts.

But it was the small gestures of gratitude that both Ashley and Carranza said helped fuel them during the round-the-clock missions that continued for nearly two months after the disaster.

As headquarters for Operation Tomodachi and a hub for aid delivery and the voluntary evacuation of 10,000 military dependents, Yokota was vital not only to relief operations, but also in supporting the thousands of auxiliary U.S. personnel who deployed to Japan after March 11.

It was the &ldquo;Yankee ingenuity of our young troops who stepped up to the plate&rdquo; that made the mission successful, said Yokota commander Col. Otto Feather.

Feather said he told Biden that a week ago when Air Force Two stopped to refuel at Yokota at the start of the vice president&rsquo;s Asia trip, which also included stops in China and Mongolia.

&ldquo;The United States is a Pacific power,&rdquo; Biden said Wednesday. He called the U.S. military a &ldquo;stabilizing force&rdquo; in the region that has contributed to its security and economic growth, including China&rsquo;s economic rise.

&ldquo;The role you all play will become increasingly important,&rdquo; Biden told troops. &ldquo;You are the glue that holds this all together.&rdquo;