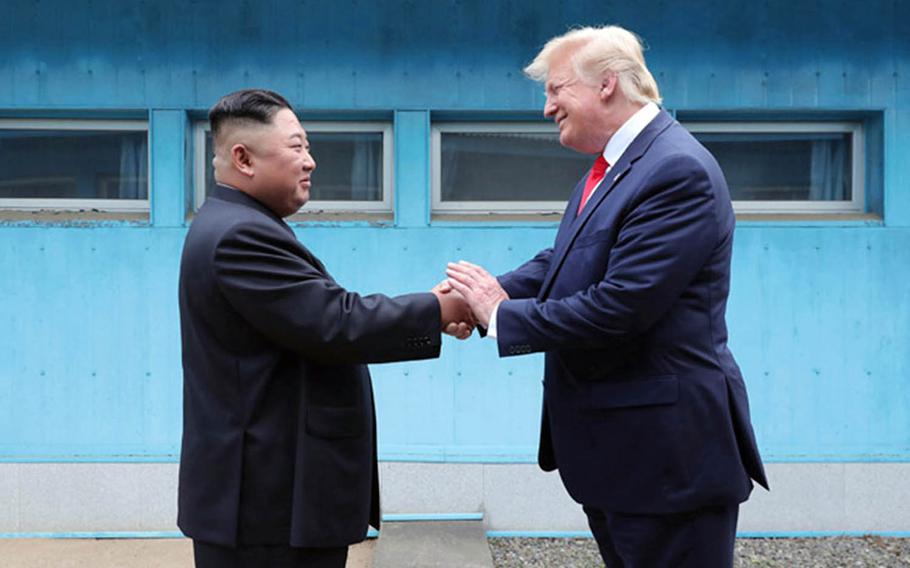 SEOUL, South Korea — During the final debate before the election, Democratic presidential candidate Joe Biden called North Korea’s leader a “thug” but said he would meet with Kim Jong Un if the communist state agrees to denuclearize.

The comment came during a testy exchange Thursday evening between Biden and President Donald Trump over how to deal with North Korea’s nuclear weapons program.

The former vice president accused his Republican rival of cozying up to Kim, whose regime is ranked as one of the worst human rights abusers, with a policy that has allowed the North to continue improving its arsenal.

The North showed off a huge new intercontinental ballistic missile during an Oct. 10 military parade, although it has not conducted a long-range missile or nuclear test in nearly three years.

Trump became the first sitting U.S. president to meet with a North Korean leader during a June 2018 summit in Singapore during which they agreed to a vague promise to “work toward the denuclearization of the Korean Peninsula.”

The leaders met twice more in Vietnam and on the Korean border, although nuclear talks between the two nations deadlocked after they failed to agree on details about sanctions relief and disarmament steps.

The president reiterated his usual talking points that his engagement with Kim prevented a new war from breaking out on the divided peninsula, which is home to some 28,500 U.S. troops.

“We have a very good relationship and there’s no war,” he said.

“What has he done? He’s legitimized North Korea. He’s talked about his good buddy who’s a thug, a thug,” Biden said. “And he talks about how we’re better off and they have much more capable missiles able to reach U.S. territory much more easily than it ever did before.”

Biden said he would maintain pressure on China to help rein in its communist ally if he wins the Nov. 3 vote.

In response to a question about whether he would meet with Kim, Biden said only “on the condition that he would agree that he would be drawing down his nuclear capacity.”

However, Biden offered few details about how his policy would be different after decades of initiatives by administrations from both parties have failed to prevent the North from developing nuclear weapons.

Trump said Biden and then-President Barack Obama had left him “a mess” and claimed that Obama had tried to meet with Kim but was rejected because Kim “didn’t like him.”

Former Obama administration officials have vehemently denied that claim, saying the Democratic leader never considered meeting with Kim as U.S. policy at the time was to rely on economic sanctions to pressure the regime to give up nuclear weapons.

“We had a good relationship with Hitler before he, in fact, invaded Europe,” Biden said. “Come on. The reason [Kim] would not meet with President Obama is because President Obama said, ‘We’re going to talk about denuclearization. We’re not going to legitimize you and we’re going to continue to push stronger and stronger sanctions on you.’”